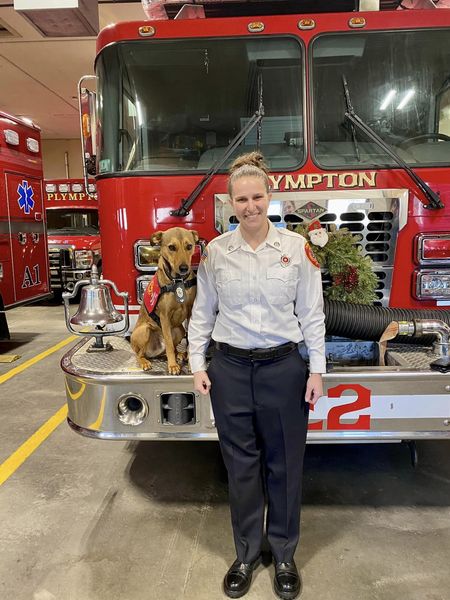 2022—PLYMPTON – The Massachusetts House ofRepresentatives recognized Plympton Fire K9 Wilden (pronounced: WILD-IN) and his handler, Captain Cheryl Davis, with a citation in recognition of their certification as a First Responder Therapy Dogs team.

State Representative Kathy LaNatra presented the team with the citation during a ceremony at Plympton Fire Headquarters on Wednesday, December 21, 2022.

Captain Davis rescued Wilden, a three-year-old-mutt, from Antigua in 2019.

He was part of a litter found abandoned on a beach on the island, which has a rampart stray dog and cat population.

They are also available for debriefings after difficult calls and first responder special events.

Captain Davis recognized Wilden’s knack for comforting people when he would visit her at the fire station.

Wilden’s calming effect was on full display when she brought him to a class while getting certified in Critical Incident Stress Management.

“As first responders were telling their story, he had an instant instinct to go up to the ones who needed him the most,” Captain Davis said.

The well-being of first responders is near and dear to Representative LaNatra’s heart.

The wife of a police officer, she filed a bill to provide greater access to mental health services for first responders involved in traumatic events.

“First responders encounter traumatic events every day and are often reluctant to share their feelings with colleagues or friends,” she said.

“My bill will really insist they get the help they need.”

Captain Davis and Wilden have been working hard to earn this certification.

This past August, Wilden obtained his American Kennel Club Canine Good Citizen certificate, which was the final step in his application for the First Responder Therapy Dogs program.

Captain Davis and Wilden are one of 81 certified First Responder Therapy Dog teams across 17 states.

Two additional teams are currently enrolled in the certification process.