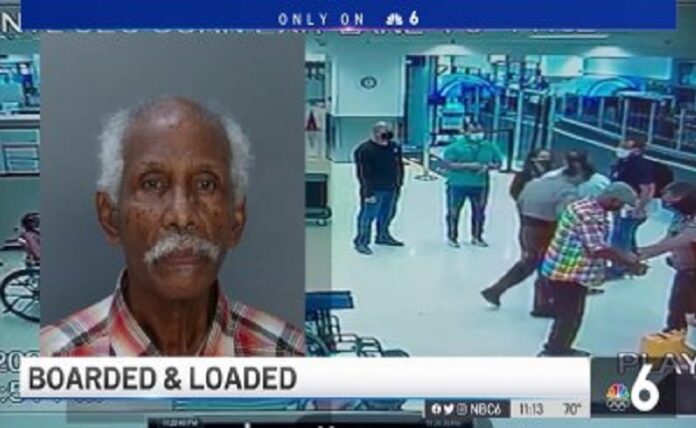 NBC -BOSTON – A man carrying a fully loaded gun boarded a commercial flight in Barbados and flew to Miami with the fire arm in the plane’s cabin, the NBC 6 Investigators exclusively learned — a hair-raising incident that triggered an immediate investigation by the Transportation Security Administration into the security lapse that aviation experts say could have caused a disaster.

In security video footage exclusively obtained by NBC 6 Investigators, airline passenger Cameron Hinds is seen being stopped at a Miami International Airport checkpoint after TSA officers found a loaded handgun in his belongings.

According to a Miami-Dade Police report, Hind’s revolver had five 32-caliber rounds in the gun’s chamber. He told told police that when he boarded the plane in Barbados he had the revolver in his pants pocket. That failure in screening abroad has sent federal security experts into high alert.

The U.S. Department of Homeland Security relies on foreign governments to maintain aviation security standards at last-point-of-departure airports with direct commercial flights to the U.S.

Hinds made his journey from Bridgetown, Barbados, to Miami on American Airlines flight 1089. During the flight, police say his Ruger revolver was with him in the cabin for the four-hour trip.

What Hinds was able to do runs against everything that was implemented after 9/11 to keep the traveling public safe and to protect national security, Rollins said.

“That’s what the whole thing is set up for, to catch guns. Not only a gun, but a loaded gun,” Rollins said. “Obviously, a weapon in the cockpit or in the airplane anywhere is a grave danger to everyone on board … It could have been used for far worse, as 9/11 teaches us. And in terms of the aircraft, even if it went off accidentally, there are so many things it could hit. Some of them could disable the aircraft.”

The TSA notified authorities in Barbados of the security lapse at the Grantley Adams International, where Hinds took off from.

“We understand the danger in allowing things like this to happen. Sadly, this is one of those unfortunate situations,” said Neval Greenidge, Barbados’ Consul General to Miami. “We take it extremely seriously and we have been working and investigating this matter since we received the report from here in Miami.”

“The gentleman was searched. He was patted down. He was scanned, but the firearm seemed to have been under a laptop and I think that’s where the blunder came because the officer who would have been reviewing his bag or checking the luggage should have taken the laptop out, or had him take the laptop out which is customary for the TSA,” Greenidge said.

Greenidge added that screeners at Grantley are being retrained and “all steps are being taken to make sure there is no repeat.”

Security experts say terrorists groups continue to target passenger aircrafts as they pursue new attack methods, and there’s always a concern that Latin America and the Caribbean could be a launching point for those looking to do harm in the U.S. That threat is one of the reasons why security officials are so troubled by the failure in Barbados.

In a statement to NBC 6, American Airlines said, “The safety and security of our team members and customers is our top priority. We are aware of this incident and have worked closely with law enforcement on their investigation.”

Hinds was taken to Miami-Dade jail and charged with carrying a concealed weapon — a felony. Hinds entered a not guilty plea and was scheduled for a court hearing Friday. NBC 6 Investigators attempted to contact him but his phone wasn’t working.