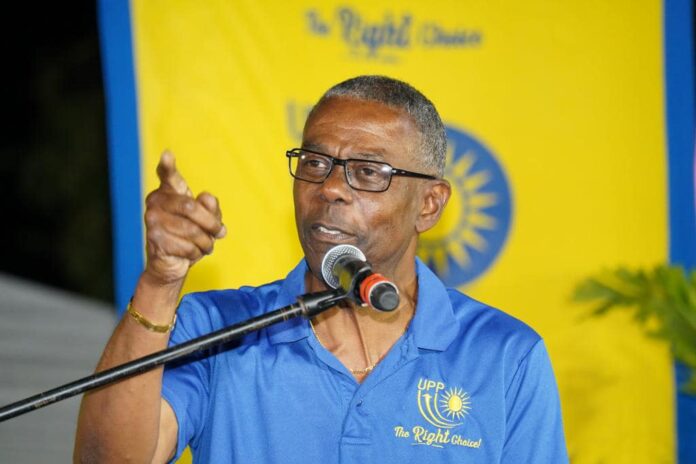 Lovell said: ” Social Security payments – for pensioners and other beneficiaries – a crying shame.  And literally so!  Because this administration has had our elders weeping at the indignity of being without and doing without, or of begging a hand-out here and there or suffering in silence.  They do not deserve that!

Nor do the workers who, dutifully, pay in their contributions every month.  And yet they are forced to wait five, six, seven months for their benefits.  Babies already christened and looking to go to pre-school, and yet their mothers are still waiting for their maternity payments.

While you are lighting lamp to look for your benefits, Gaston Browne has failed to make regular payments on the bond. In fact the one truth that Lionel Hurst ever did tell was when he confessed that successive Labour Party governments took millions out of Social Security and did not put the money back …that deliberate act of criminal neglect is unforgivable.

And he took advantage of Medical Benefits, too.  As soon as the ALP came to office, it raided the reserves of the MBS – your money; private-sector employers’ contributions; funds held in trust!  And when the Hon. Jamale Pringle asked about it, what did Gaston Browne say: “Oh, that was a grant. We don’t have to pay it back… .”  That is how this failure, Gaston Browne, writes off the debt he owes you.

Now, this past weekend, after all the showboating and grandstanding regarding the reopening of Jolly Beach Resort, what happened?  Staff have gone home again, while guests have had to be carted off to other properties – running from mosquitoes and complaining of no water or electricity.

Meanwhile, down at the St. John’s Harbour, we are yet to see one OASIS-class ship dock here – after eight years of dredging at only-the-good-Lord-knows what cost, since NAMCO appears to be a secret society, taking our money but giving no account for it.  And, while they want us to believe that the tourism cup is spilling over, the taxi drivers and Vendors Mall operators are telling a different story, because their saucer remains dry no matter how many ships are in Global Ports’ port.

Now, later this week, we are expecting more so-called tourists from West Africa; “tourists,” they say – but, in fact, job-seekers who are lining up for work alongside Antiguans, Barbudans, and Caribbean Brothers and Sisters. “