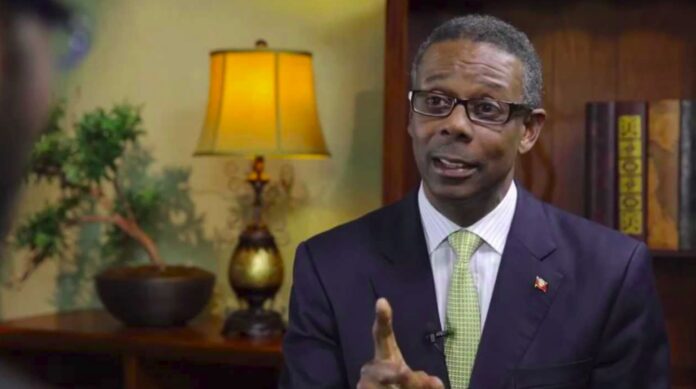 REAL NEWS:        Harold Lovell, Political Leader of the United Progressive Party (UPP), is expressing disappointment that the Judicial Committee of the Privy Council has dismissed an appeal by two Barbudans; but he says that, politically, this is something that can be addressed with a change of government. CLICK HERE TO JOIN OUR WHATSAPP GROUP.

Barbuda MP Trevor Walker and McKenzie Frank had challenged the constitutionality of the Paradise Found Act, 2015 all the way to the British court.

In its 21-page decision, the five law Lords and Lady outlined a number of reasons for its decision, and ruled that the claimants have no realistic prospect of succeeding in their claim under Section 9(1) of the Constitution.

It noted that the Eastern Caribbean Supreme Court of Appeal was correct to strike out that claim.

But Lovell opines that the claim was two-fold — that is, legal and moral/historical – and formed over the last two centuries.

Lovell says he has perused the judgment, but not read it in its entirety, and notes that the case has been decided on its legal perspective.

Accordingly, he says the Barbudans will now have to look at the facts and decide where they go from here.

Notwithstanding the adverse decision, Lovell says the UPP will stand in solidarity with Barbudans on their moral/historical claim.

It is obvious from the judgment that the Privy Council considered only the legal claim, which is what courts do, a source says.

The ruling should finally put to rest the contentious issue of land use on Barbuda and who has the right to issue leases, since Barbudans now have no other legal options to fight their centuries-old position.

The case hinged on Barbudans’ opposition to a major tourism development on the sister-island that involved the construction of a hotel resort by actor Robert DeNiro and his partners.

Walker, Frank and the Barbudan people felt that the 391 acres of land leased by the Government to Paradise Found LLC for 99 years – at a rental payment of US$5.2m on the signing of the lease – was unjust to them.

Under the Paradise Found (Project) Act 2015, there is also an option to renew the lease for a further 50 years, exercisable on completion of the resort, for a further rental payment of $1 million.

Walker and Frank were alleging that the lease infringes their rights under section 9(1) of the Antigua and Barbuda Constitution (1981), protecting them from deprivation of property.

They were hoping the Privy Council would have ruled that the Act is void and/or they are entitled to payment of fair compensation and vindicatory damages.

The defendant, Attorney General Steadroy “Cutie” Benjamin, representing the Government of Antigua and Barbuda, had sought to strike out the claim as disclosing no cause of action and/or as being an abuse of process.

Prior to the judgment, both the Barbudans and the Government had expressed optimism about winning the case.

Because of this, he says, the Paradise Found Act and any amendments to the Land Act would have been lawful based on the principles of the sovereignty of Parliament and the later Act of any Parliament superseding a previous one.