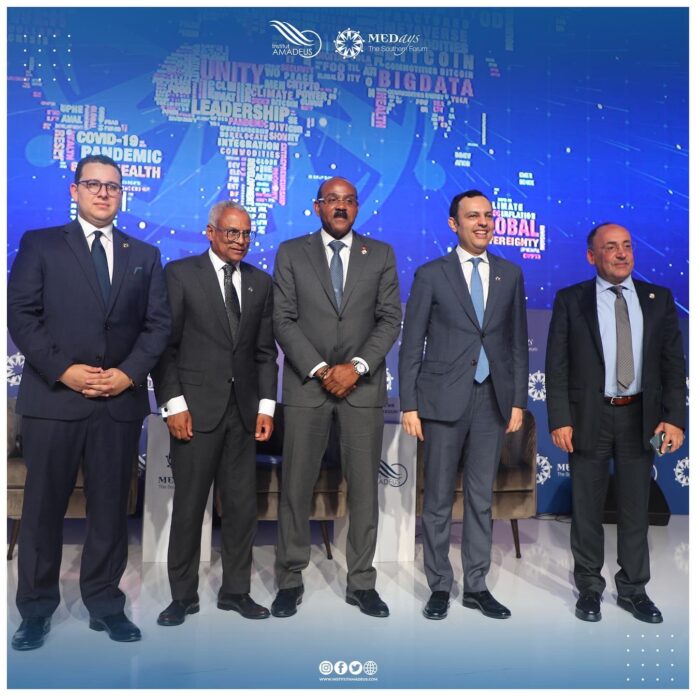 A historic move was made at the beginning of this year’s United Nations Framework Convention on Climate Change’s (UNFCCC) Conference of Parties (COP27), in Sharm el Sheik, Egypt: Loss and Damage (L&D) was finally added to the agenda.

The minute I learned the issue would be on the table at COP27, I had an instant flashback to COP21 in Paris, when hordes of young people from both developing and developed countries came together, en masse, standing in the freezing wind, protesting and demanding that Loss and Damage be prioritised.

For years, countries of the Global North (those rich countries which have benefited from industrial development and are some of the largest emitters of the greenhouse gases contributing to climate change) have been putting up barricades, preventing any discussion of L&D, much to the chagrin of the Global South (those countries already facing the brunt of the climate crisis).

In his address at the opening of Climate Week in New York City, the new Executive Secretary of UN Climate Change, Simon Steil, described COP27 as “the world’s first opportunity in the era of implementation of the Paris Agreement to demonstrate progress.”

For many, this COP could not be considered remotely effective if L&D wasn’t up for discussion. Without talks around L&D, how could implementation to deal with climate impacts be achieved? For Caribbean countries, the COP27 mission is being led by the banner of climate justice, particularly through the Loss and Damage (L&D) agenda.

So why is Loss and Damage so important for Caribbean nations? Think of the residual impacts of climate change which mitigation and adaptation efforts are insufficient to prevent or alleviate — including desertification, or sea level rise. L&D is essentially a direct response to the inadequacy of mere adaptation and mitigation efforts.

It was the Alliance of Small Island States (AOSIS) that first began championing the cause of L&D in 1991, in the run-up to the negotiations around setting up the UNFCCC11. AOSIS led the way in proposing the creation of an international insurance pool to assist in offering compensation to the most vulnerable and low-lying coastal developing countries, such as Mauritius, Seychelles, the Maldives, Samoa, Palau, etc., in terms of Loss and Damage arising from sea level rise. Since then, AOSIS has consistently called for a mechanism that would possess the ability and effectiveness to compensate countries.

The idea is to garner support for climate-vulnerable countries, which bear the heavier burden in terms of the climate crisis. Knowing fully well what this crisis means for their economies, societies, and livelihoods of their citizens, small island nations have been key in championing the L&D concept since its inception — and they have not backed down, creating a clear rally cry for raised ambitions around L&D financing.

In recent years, pressure has been steadily building to institutionalise a UNFCCC mechanism on L&D in response to the shortcomings of mitigation policy and the inadequacy of adaptation support for countries already experiencing the worst effects of climate change. This is why Caribbean leaders have been and continue to strive to make big strides at COP27 with regard to L&D.

For Caribbean and island nations, L&D is a debilitating obstacle that stands in the way of achieving development and fostering economic prosperity. As reported by CCRIF, annual expected losses from the effects of disasters triggered by such hazards are expected to be in the range of one to nine percent of Gross Domestic Product (GDP) by 2030, depending on the country and the rate of climate change.

The climate crisis has been manifesting through detrimental impacts across the scope of life in the Caribbean, including effects on agriculture and food production, human health, ecosystems, tourism, fresh water availability, energy production, livelihoods, human productivity, critical infrastructure and economic development.

According to a report by the Food and Agriculture Organisation of the United Nations, the Caribbean has experienced direct and indirect losses of over three billion United States dollars due to natural disasters associated with weather and climate events between 1970 and 2000 alone.

As I type this report from the computer centre outside COP27’s main plenary hall where all the lofty speeches took place a couple days ago, I am concerned about the massive losses and damages currently being faced by my fellow citizens of Trinidad and Tobago due to massive, widespread flooding overnight.

Loss and Damage. In the Caribbean, we see it, we feel it, we know it.

In light of oil companies scoring tens of billions in profits this year with crude prices skyrocketing in the wake of Russia’s invasion of Ukraine, a group of small island nations joined a call on November 8, pushing for a windfall tax that would force oil companies to compensate developing countries for the damage caused by climate-change-induced natural disasters.

“It is about time that these companies are made to pay a global COP carbon tax on these profits as a source of funding for loss and damage,” stated Gaston Browne, prime minister of Antigua and Barbuda and current AOSIS chair. “While they are profiting, the planet is burning,” he added, speaking on behalf of the 39-nation Alliance of Small Island States, many of whose very existence is threatened by rising sea levels and increasingly intense tropical storms. Meanwhile, Barbados Prime Minister Mia Mottley championed a ten percent tax on oil companies to fund Loss and Damage.

Island nations did not come to Egypt to twiddle their thumbs. They will no longer be obstructed by the United States and the European Union, both having dragged the L&D discussion in the past. “We look forward to the establishment and officialisation of the fund by 2024,” Brown said.

At the heart of the matter, Loss and Damage is an issue of justice.