The staging of the Antigua & Barbuda’s version of the Disney Musical, The Lion King, is a true demonstration of the excellence that ordinary citizens are capable of.

After a year of planning and preparation, more than seventy cast and crew and a budget exceeding 100 thousand dollars, The Lion King was successfully staged here, twice last week.

We all should know the story, of the young lion Simba, the heir of his father, Mufasa and Simba’s wicked uncle, Scar who, plots to usurp Mufasa’s throne by luring father and son into a stampede of wildebeests. But Simba escapes, and only Mufasa is killed. Simba returns as an adult to take back his homeland from Scar with the help of his friends Timon and Pumbaa.

So how did Silvyn Farrell, the mastermind behind the production, transform this 1994 animation into a Broadway-like theatrical musical presentation?

It’s hard to explain, but on the night, everything seemed to have fallen magically in place. Like the prompt 8 p.m. start (a rarity in these parts) and the transformation of the Dean William Lake Cultural Centre into in the Pride Lands of Africa, not just on stage.

Animals emerged from the crowd and out of nowhere. Then live singing from a choir could be heard all over the theater, Antigua’s very own version of 4D. 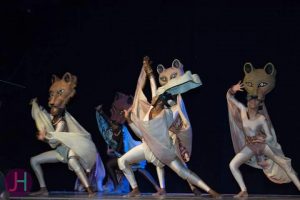 The story of the Lion King itself stands on its own and is a mixture of all kinds of emotion. The classic scene of King teaching young Simba a lesson and utter the famous words, “you deliberately disobeyed me” followed by the bonding moment of love between King and future king.

Scar’s cunning ways and the awful moment when the king of the jungle died. The “Hakuna matata” moment and who can forget that titillating love scene between Simba and his bride-to-be.

The Lion King production was much bigger than Antigua but Antigua did it. The young people proved their worth in the area of dancing, craft, acting, and singing. It was a production pleasing to the eye and ear, soul and heart. 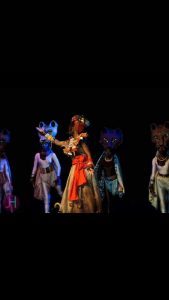 If anything, The Lion King was a demonstration of what Antiguans are capable of If they just go for it.

Production Director Silvyn Farrell says the creation was not perfect but the capacity crowd overlooked any minor technical glitches that the venue has become infamous for.

ANR Entertainment asked Farrell what was Antiguan about the staging.

“Because of financial challenges and intellectual property, we could only touch the surface of the making it Antiguan. Thus, the creative ideas of the designers and the use of locally grown products, the style of music for some songs, incorporation of the steel pan, the choreography for the dances and the arrangement styles.”

“For example, coconut fiber, locally made dried beans and seeds were used in some of the costumes and some were stuck with turtle berry which was used in the olden days by grandparents.

“We cut a tree and used it to make the staff for Rafiki. The mixture of turtle berries and dyes were also included, the use of banana tree and different Antiguan plants were used in the oasis scene. The rubber tank which is used to supply homes and businesses with water was used to make the headpieces along with the fiberglass.”

In Summary, the talent was what was Antiguan and that’s all it needed to be. 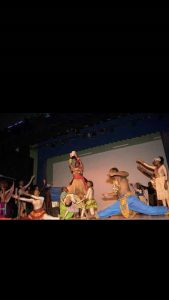 Farrell thinks that theater musicals, whether Broadway or otherwise, is an area of the arts that’s seldom tackled in Antigua.

“I like to live up to challenges and upon carrying out market research, I realised that there was a yearning for a fresh type of theater.”

He said producing a popular production that is well known and loved by a global audience can be challenging.

“People expect very little variation from the original script and the style can either kill or make the play. I realised that not only is the style similar to North American culture, but it is one that helps to not just focus on one aspect or discipline in the art, (which is what seems to always happen), but it also highlights other key areas of talent amongst young people.

“I like and want to highlight the work of positive youth and also find a way to include marginalised youth as a means of addressing social issues and so far, my experience has taught me that this is the style that can help to gain full youth participation.”

The Antigua Edition of Lion King is also expected to show in St. Kitts & Nevis later this year.