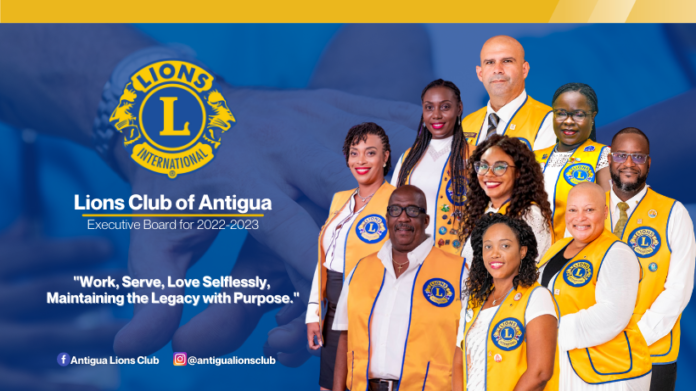 The Lions Club of Antigua roared into the 2022 – 2023 Lionistic Year during their Installation Ceremony on July 2nd at the Sir Vivan Richards Stadium – Presidential Suite. Considered ‘The Event of the Year’, this celebratory annual meeting doubled as an opportune time for the club to recognize club members, celebrate the club’s service and acknowledge community members and partners.

Even though the pandemic affected most of the usual club activities for the 2021-2022 Lioniostic year, the members were resilient and innovative in their service programmes! They spearheaded initiatives such as seedling distribution, food packages and facilitated virtual workshops.

The evening’s highlight was “the passing of the club’s gavel!”

Lion Gerard Shoul, MJF indicated that the theme for the 2022-2023 Lionistic year is – “Work, Serve, Love Selflessly, Maintaining the Legacy with Purpose.”

In his remarks, the newly installed President stated, ” Fellow lions all of us as members of this organization have a great responsibility to it. The foundation of where it started and sits, the core of its values and responsibilities, the achievements and accomplishments of its members both alive and deceased.”

Lion Gerard Should, MJF is honored to be following in the footsteps of his late father, Lion Charles A. Should, MJF, who was the 12th President from 1980 – 1981.

Since the club’s chartering in 1968, its members have worked on numerous projects in the local community such as the Annual Prostate Screening and Eye Screenings in schools. Proceeds from fundraising events have gone to the continuity of the Hot Meals Programme, Bursary Programme for Primary Schools and visits to Clarevue Psychiatric Hospital.