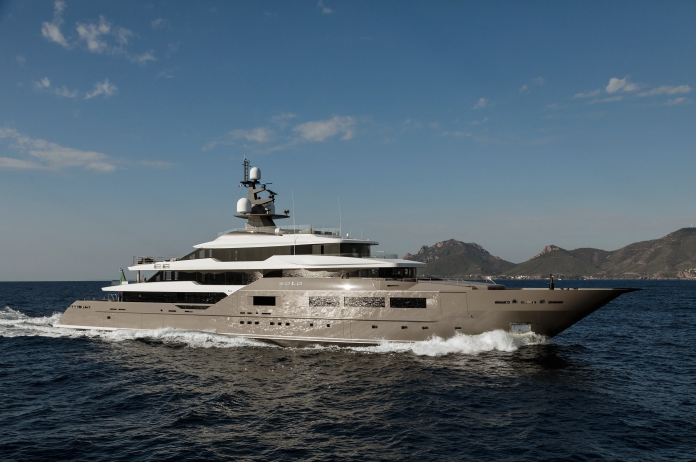 Countdown has started for the 58th Annual Antigua Charter Yacht Show taking place December 4-9, 2019. This year’s event, like in the past, will take place at the Nelson’s Dockyard Marina in English Harbour, and the Falmouth Harbour Marina and the Antigua Yacht Club Marina both located in Falmouth Harbour. Yacht Harbour lists top 10 superyachts on view not to miss this year.
L
#1. Aquijo
LOA: 86.26m
Builder: Vitters/Oceanco (2016) 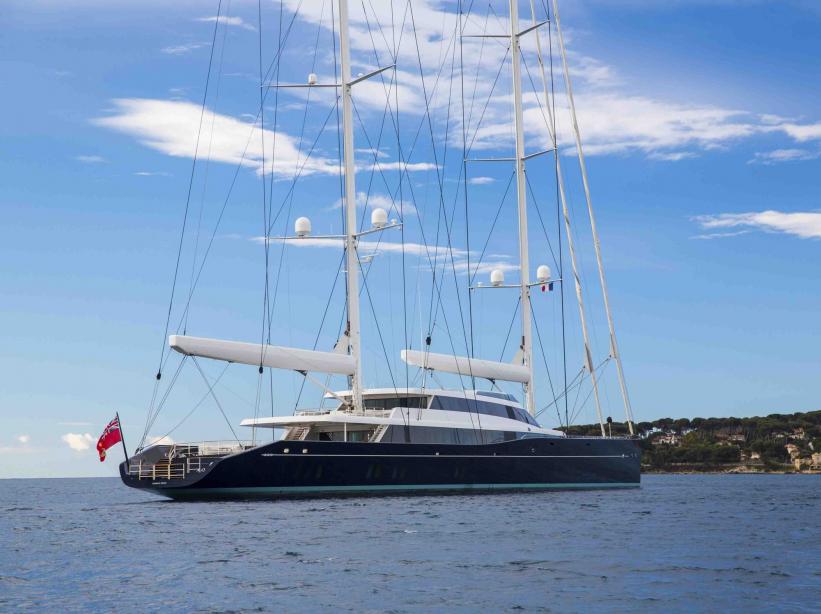 The 6th largest sailing superyacht in the world, the 85-metre Aquijo was created in collaboration between Dutch shipyards Oceanco and Vitters. BGerman studio Dölker + Voges was responsible for her interior design, whilst Tripp Design Naval Architecture styled her exterior. The yacht comprises 4 decks and accommodates up to 12 guests on-board. 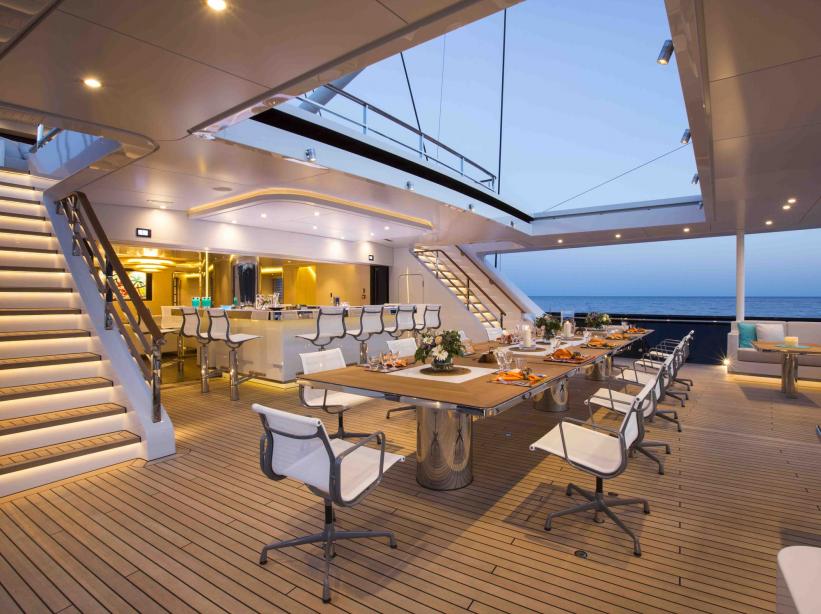 Noteworthy, Vitters developed a custom steering system for Aquijo. It works by translating the hydrodynamic forces on the rudder blades directly to the steering wheels on the flybridge, thus providing the helmsman with immediate feedback and a feeling for how the yacht is moving through the water. 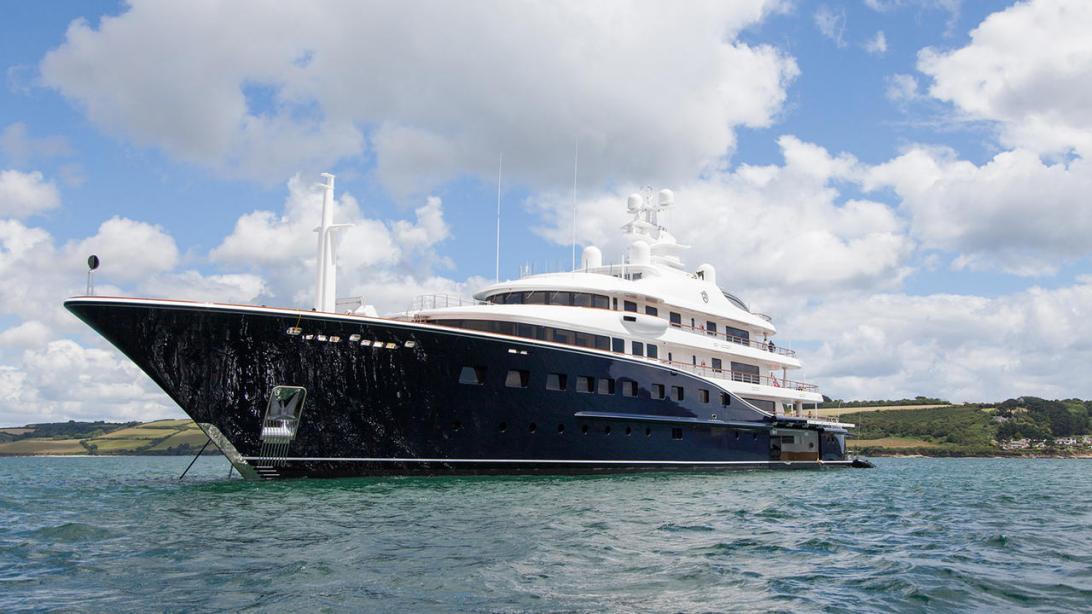 Formerly known as Cakewalk, the largest superyacht built on the territory of the USA since the 1930s, was sold to her current owner at an asking price of €119,000,000 at the end of 2014. Consequently,  the 85-metre vessel underwent a 12-month refit at Pendennis in the UK and had her name changed to Aquila.
The motor yacht can accommodate 14 guests in 7 cabins with an interior design by Dalton Designs and an exterior design by Tim Heywood. She is powered by MTU engines of 3306 hp each giving her a maximum speed of 18 knots and a cruising speed of 15 knots. 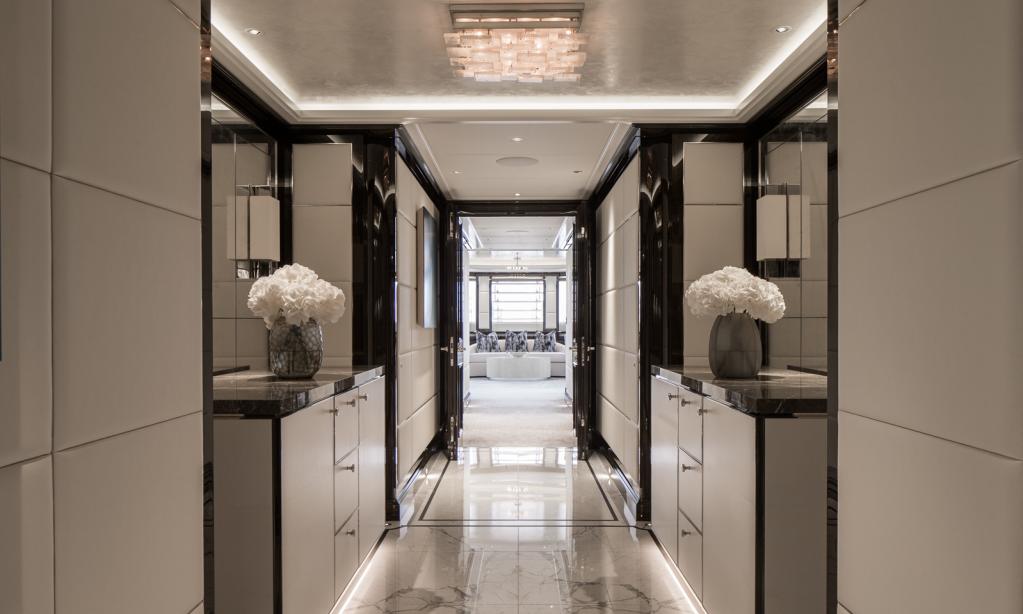 Aquila’s improvement focused mainly on the interior. For instance, the owner’s stateroom was entirely remodelled, a 60 square metre private deck was added, while the Jacuzzi was repositioned to the forward sun deck. 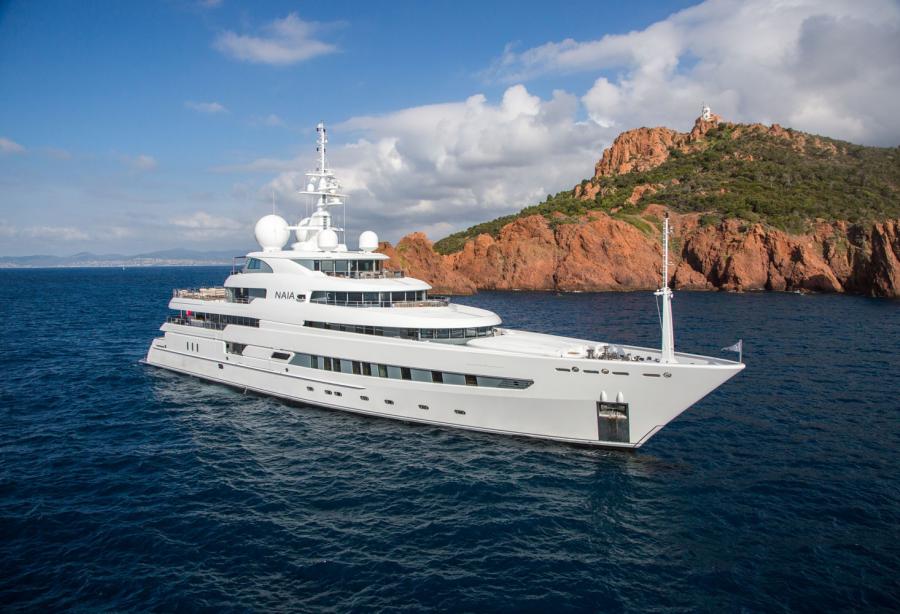 With a beam of 13.2 metres and a draft of 3.8 metres, Naia features a steel hull and aluminium superstructure. This adds up to a gross tonnage of 2,059 tons. The motor yacht can accommodate 12 guests across 8 cabins with an interior design by Mark Berryman and an exterior design by H2 Design. 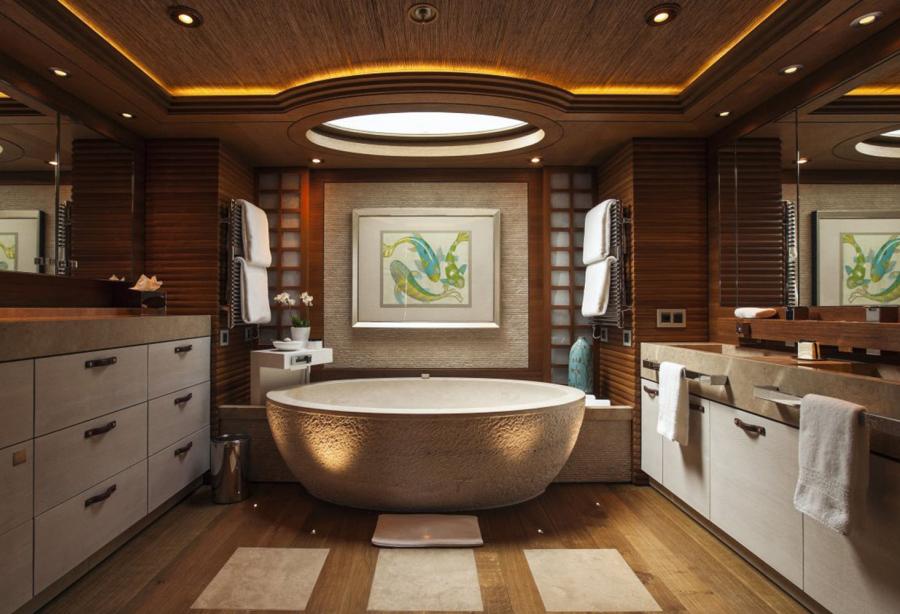 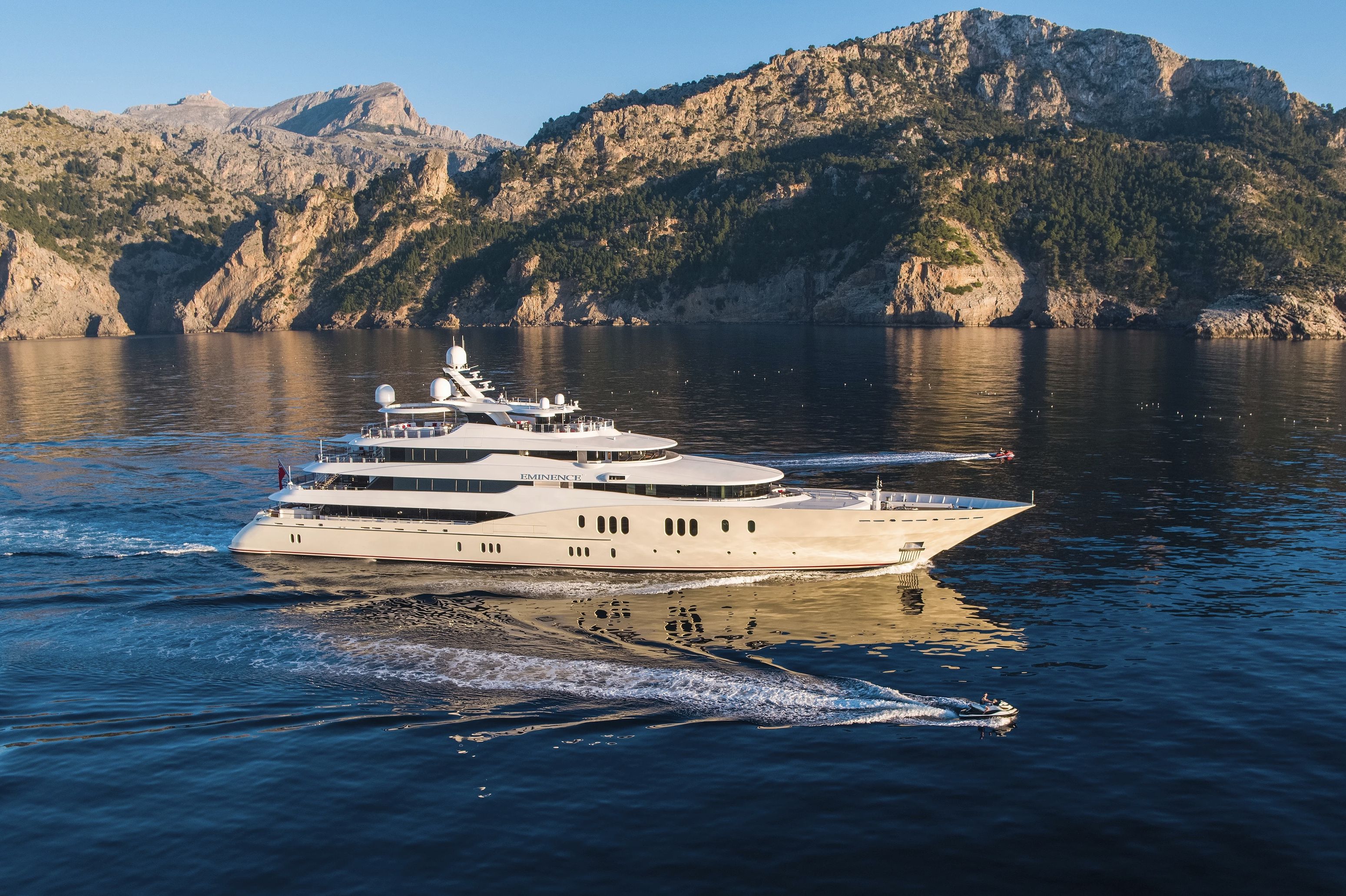 Initially built for American businessman Herb Chambers, the project was sold right before delivery in 2008. Classified by Lloyds, Eminence features a beam of 12.4 metres and a draft of 3.2 metres along with a steel hull and aluminium superstructure. This adds up to a gross tonnage of 2054 tonnes. 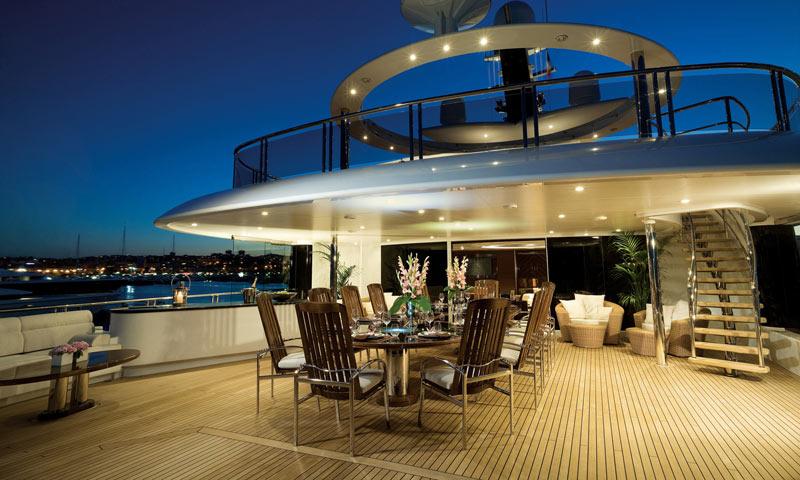 Eminence offers accommodation to up to 14 guests across 7 cabins, within interiors and exteriors by Reymond Langton. One of the most outstanding features of the yacht is her bridge deck dining room, which features a horseshoe table surrounded by sliding glass doors that can open the space entirely and deliver panoramic views when closed. Eminence comes fitted with a generous beach club and swim platform.
Powered by Caterpillar 3516 DITA engines of 2000 HP each, the yacht reaches a maximum speed at 16 knots and cruises comfortably at 14 knots for 6,000 nautical miles.
She was sold in summer 2019 asking € 80,000,000.
#5. Elixir
LOA: 54.86m
Builder: Amels (2016) 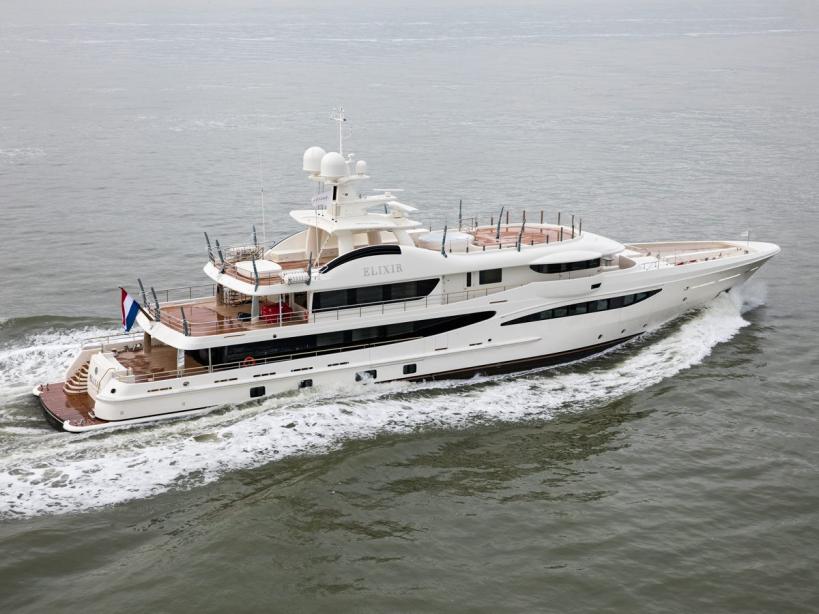 Elixir was delivered by Dutch shipyard Amels in 2016. Her exterior design concept was developed by Tim Heywood, with interiors by Laura Sessa. Her to modern interior look contributes to jet black gloss and stainless steel around the superstructure.
The magnificent outdoor spaces of Elixir include a huge Sun Deck, folding bulwarks for Main Deck indoor dining with an al fresco feeling, along with the owner’s Suite balcony.
The vessel is asking € 38,900,000.
#6. JOY
LOA: 69.8m
Builder: Feadship (2016) 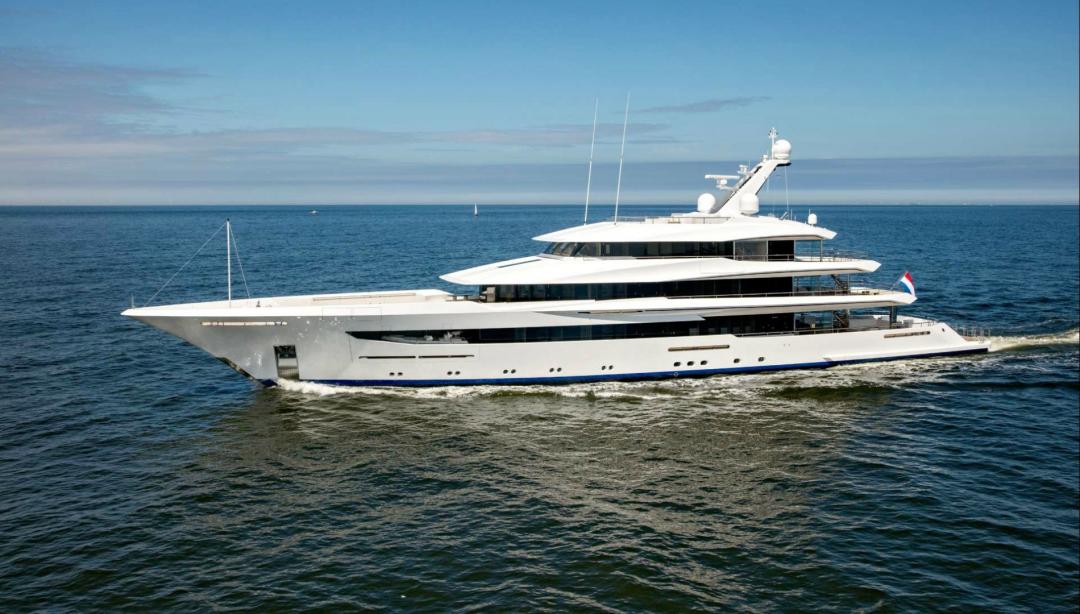 With a beam of 11.5 metres and a draft of 3 metres, JOY has a steel hull and aluminium superstructure. She is powered by MTU engines of 1850 hp each giving her a maximum speed of 16 knots, next to a cruising speed of 12 knots. Joy’s maximum range is estimated at 4,500 nautical miles. 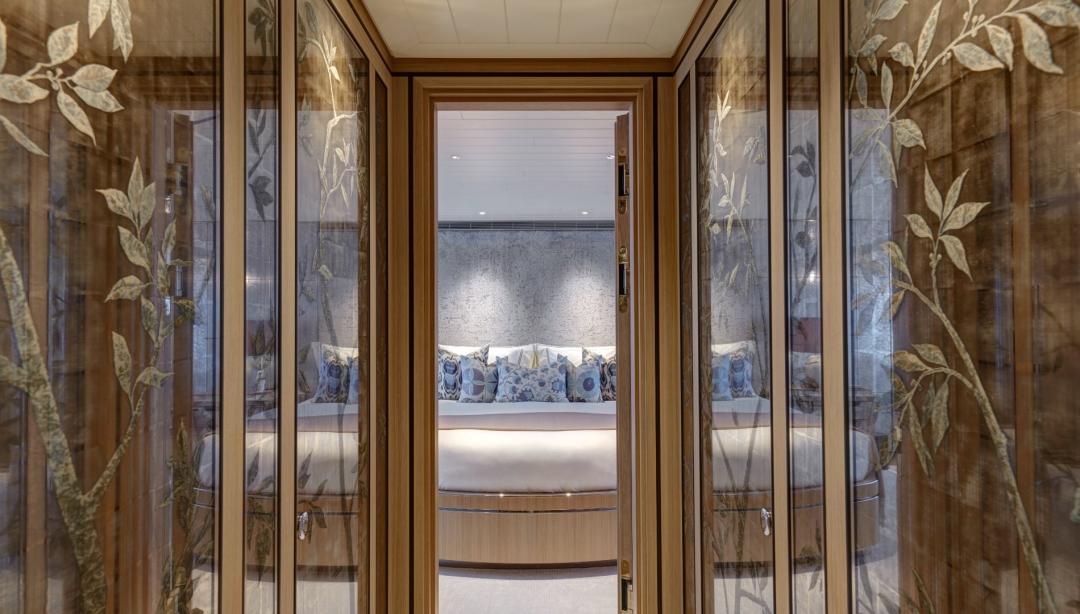 The 66.45-metre built by ISA unit bears exterior design by Andrea Vallicelli, while the interior design is by late Alberto Pinto. Both designers worked to combine design and architectural aspects in a strong contrast between the curvaceous lines of the decks with the rigorous and diamond-like geometry of the transom and sundeck.

The naval architecture is developed in-house by ISA Technical Department in conjunction with BMT NIGEL GEE naval architects, including intense tank testing program to evaluate all possible sea-conditions before starting the production of the vessel.
As for the accommodation, the yacht can sleep up to 12 guests and 17 crew. Okto is powered by twin CATERPILLAR 3512 C engines providing a top speed of 18,5 knots and a cruising speed of 16,5 knots.
The yacht is listed for sale asking € 39,000,000.
#8. Wheels
LOA: 75m
Builder: Oceanco (2008)

In 2008, the yacht originally named Anastasia was delivered amongst an uptick in the superyacht market. According to Forbes, she also became the first of a series of 3 yachts that her Russian billionaire owner, Vladimir Potanin would build at Oceanco. The vessel changed owners and the name in 2018. 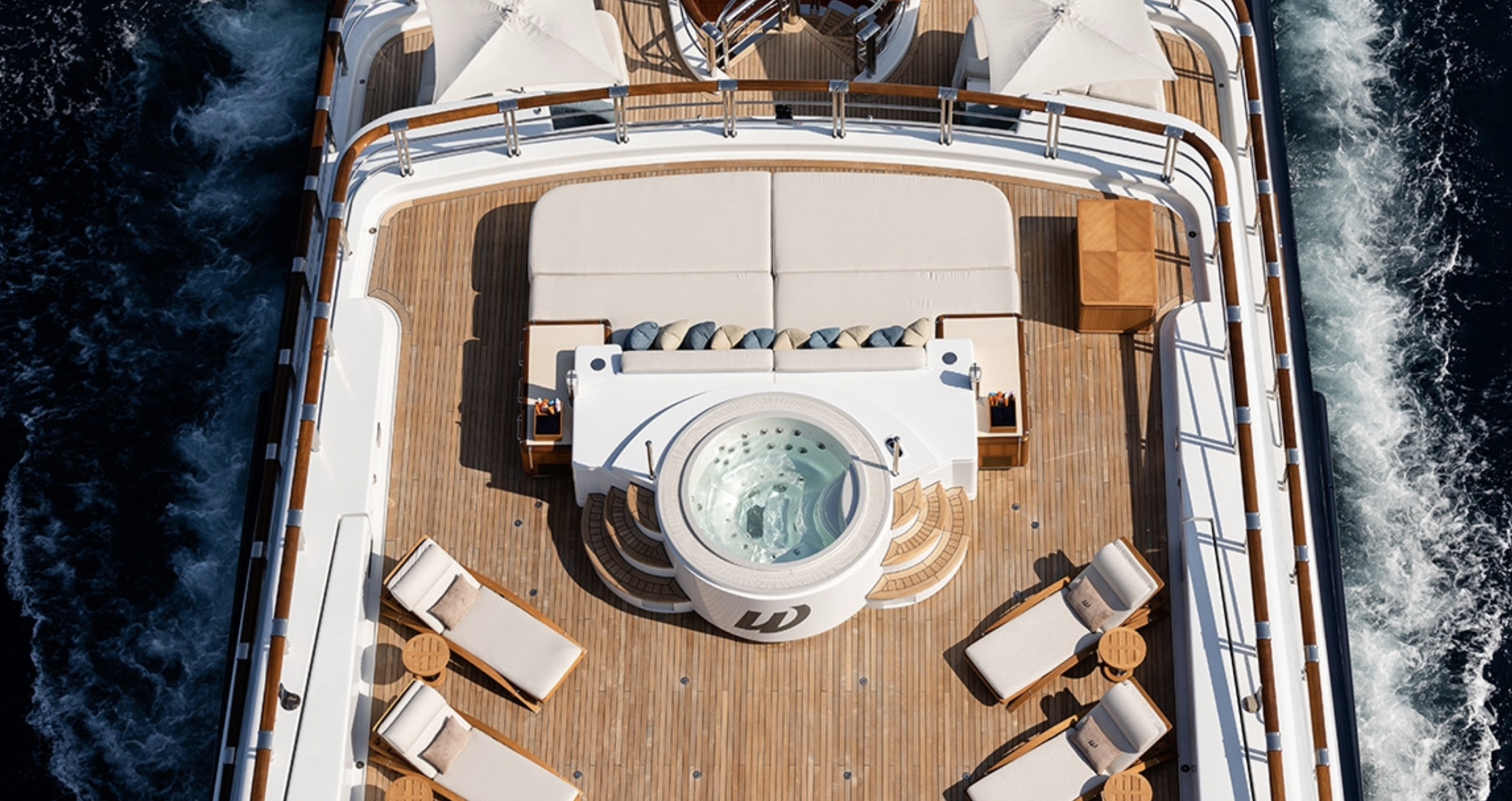 The superyacht was designed by Sam Sorgiovanni. With a beam of 13.4 metres and a draft of 3.95 metres, Wheels has a steel hull and aluminium superstructure. She is powered by MTU engines of 3648 hp each giving her a maximum speed of 18 knots and a cruising speed of 14 knots. The motor yacht can accommodate 12 guests in 6 cabins. 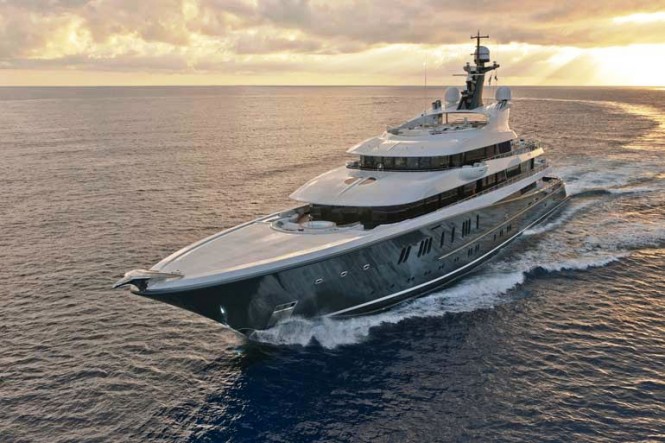 Launched in 2010 by German shipbuilder Lürssen and last refitted in 2011, the 90-mere Phoenix2 boasts design by Andrew Winch and offers elegant exterior lines, complemented by beautiful interiors and spacious socialising areas throughout. The most notable feature is definitely the giant sculpted phoenix figurehead that sits proudly on the prow of the vessel.
Built for the late Polish billionaire, Jan Kulczyk as a replacement for his previous 61-meter Lürssen, Phoenix was delivered by the German shipyard in 2010. Designed by Andrew Winch, Phoenix boasts over 100 metres of steel handrails built specially to follow the shape of the hull. 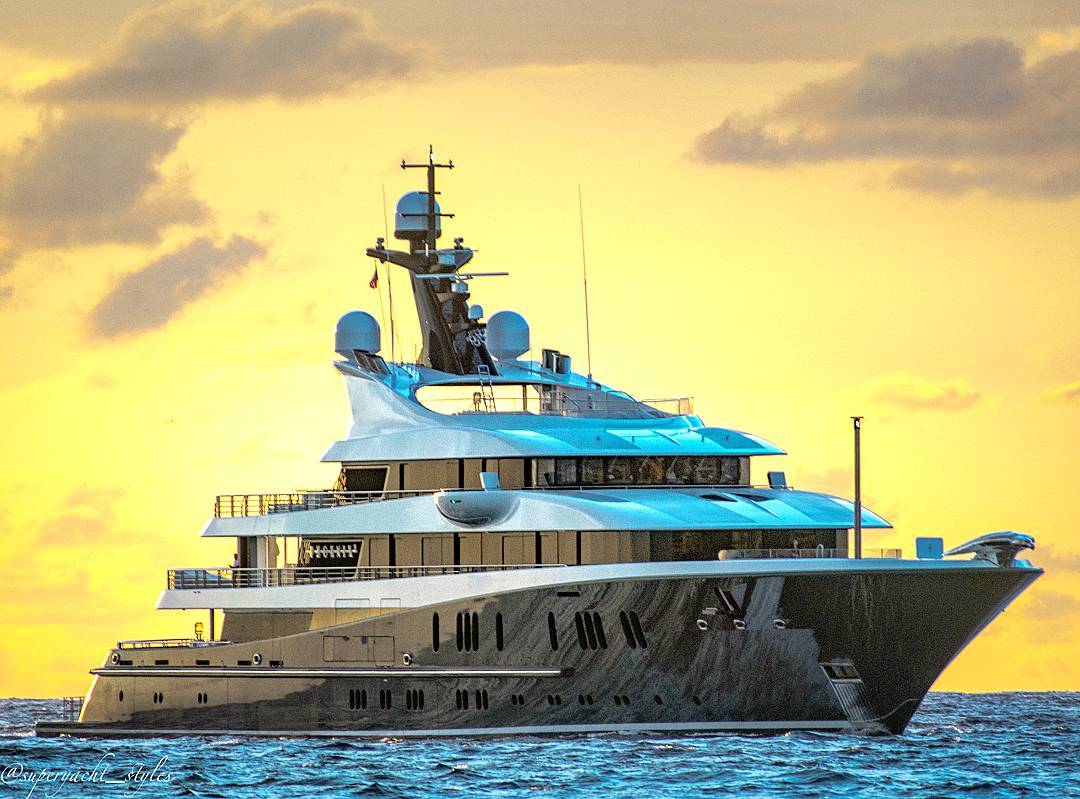 The owner’s stateroom located forward of the yacht is styled like a New York duplex from the 1930s with a private staircase linking the two areas together and leading to a private jacuzzi and owner’s deck on the yacht’s bow. Other features include a spa pool, Jacuzzi and cinema on the sundeck. 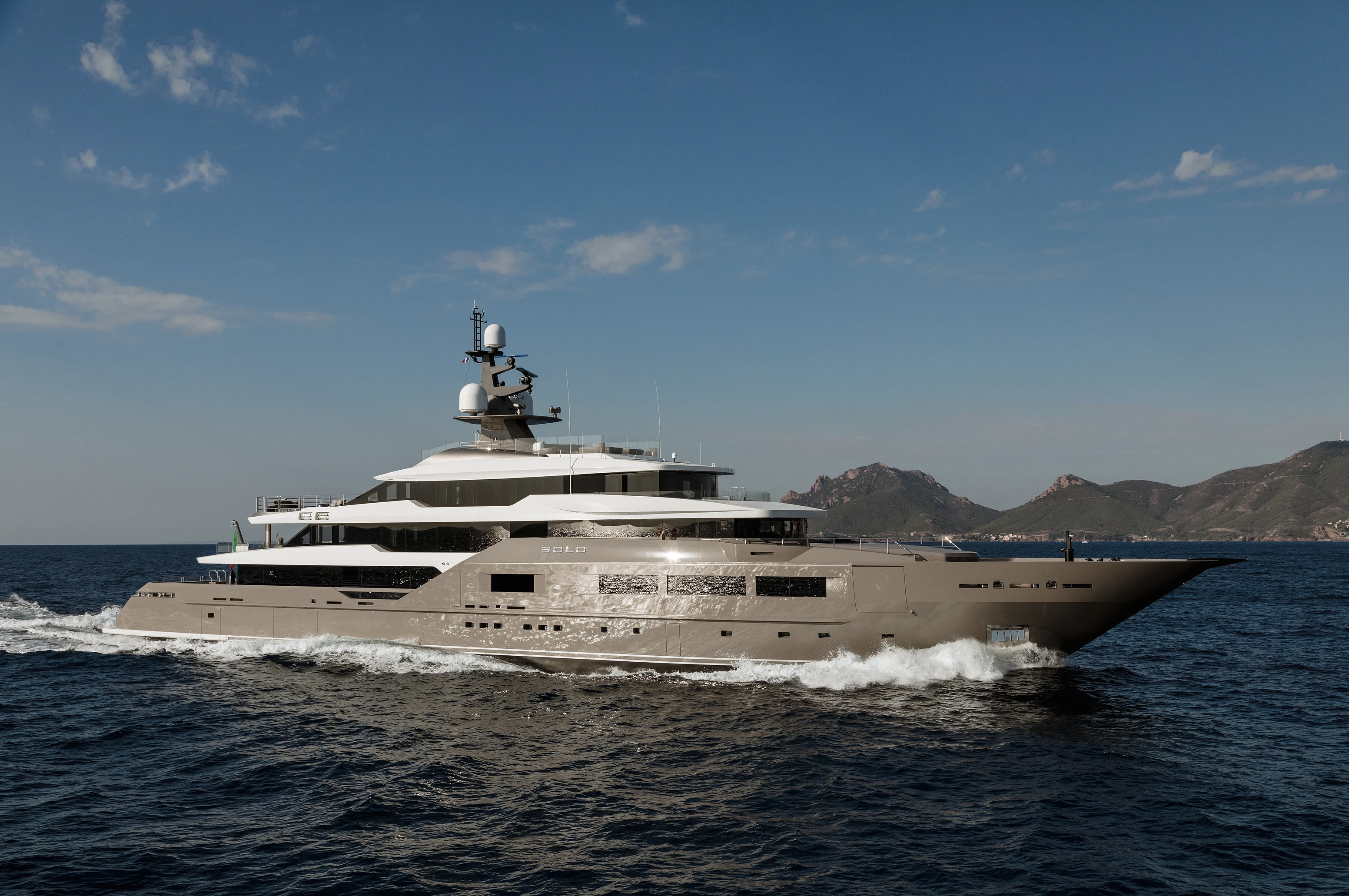 Solo was launched in August 2018, making her international debut at the Monaco Yacht Show the same year. Francesco Paszkowski was responsible for both her exteriors and interiors, collaborating with Margherita Casprini for the latter. Solo’s interiors feature spacious main and upper salons providing relaxation zones with large plush seating areas, along with a dazzling baby grand piano and numerous entertainment options.
The yacht’s six staterooms can accommodate up to 12 guests, including a spacious VIP, two doubles and two twins. The master suite is fitted with a private terrace complete with sunpads and a Jacuzzi with panoramic views. 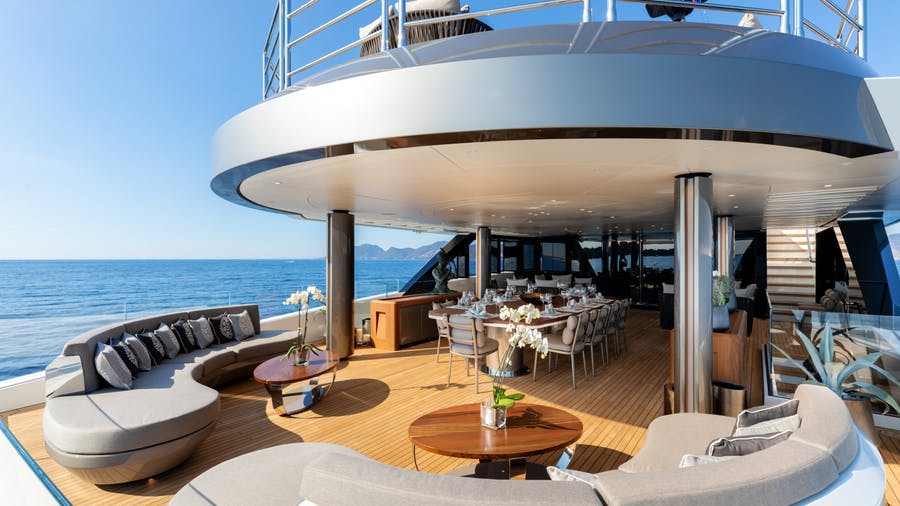 Some of key features include a swimming pool and a private dance floor, which easily converts to a touch-and-go helipad, on the skylounge aft. Solo’s beach club, meanwhile, represents a spacious and welcoming space with sofa, bar, TV, oversized glass walled gym with fold-out terrace, bathroom, sauna (also fitted with its own fold-out terrace) and hammam.
The vessel is listed for sale asking €71,500,000.