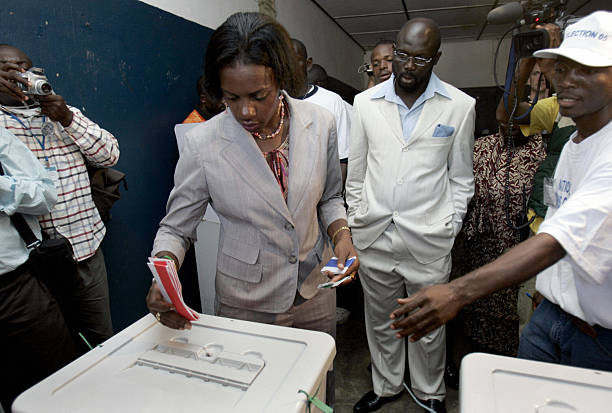 A Jamaican national has become the First Lady of Liberia following the election of her husband as the new president of this West African nation.

Clar Weah’s husband, George Weah, a former FIFA World Player of the Year, won the presidency in the Liberian electoral run-off on December 26.

Clar Weah, who was born in Jamaica to Jamaican parents, migrated to Fort Lauderdale in the United States where she runs a thriving Caribbean restaurant and grocery store.

According to reports, the couple met in a bank in the US  where Clar worked as a customer service officer.

“Clar, who unlike most women of Caribbean descent, dresses simply, is regarded not only as a brilliant strategist but great canvasser as well, whose bright smile even in difficult moments is able to break barriers,” said the Punch newspaper in a recent article. “Close allies describe her as intelligent and possessing a special type of aura.

“The Jamaican wields a lot of power around her husband and could further expand her power base once he assumes office as the President of Liberia in January 2018,” the Punch continued.

Liberia, a country yet to fully recover from many years of civil war and senseless blood-letting, might not be popular with many around the world but that has not stopped the name – George Weah – from being prominent on the lips of millions across continents, the Punch said.

One of the tiny West African country’s most illustrious sons, Weah shot to global prominence plying his trade with some of Europe’s biggest football clubs.

An energetic and skillful striker during his playing days, the 51-year-old featured for the likes of Paris Saint Germain, Monaco, Chelsea, Manchester City and AC Milan, where he won the coveted FIFA World Player of the Year and Ballon d’Or in 1995 – the first and only African to achieve such feat to date, according to the Punch.

“That achievement, not only engraved Weah’s name in the sports hall of fame but made him more prominent across the world.Joining politics in his home country shortly after retiring from professional football in 2003, the Punch said Weah has occupied various top positions, winning the keenly-contested presidential run-off election in December after the main ballot earlier in October.