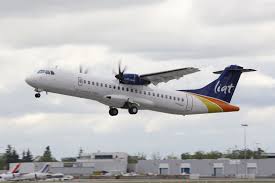 An aviation consultant who wants to see drastic changes made to LIAT to help the regional airline survive and become profitable is predicting that LIAT will fold in the near future if far-reaching changes are not implemented.

Former LIAT pilot James Lynch is calling for a board of directors whose members have aviation experience or expertise, and less political interference in the running of the company.

As WINN FM has been reporting, Lynch has sent a proposal to LIAT shareholder heads of government and other CARICOM leaders, outlining what he considers major steps that can cure LIAT’s ailments.

When asked what kind of response did he get from the leaders that he sent his proposal to Lynch said: “Most of them I didn’t even get an acknowledgment, from one or two of them I got an acknowledgment that they received my emails and documents, other than that I got zero response.”

WINN asked if there would ever be a time when political appointees are a thing of the past in the LIAT scenario.

“I think I will live to see the demise of LIAT, I don’t believe LIAT can last much longer. Barbados is already completely bankrupt with a national debt of over $20 billion dollars, Antigua is headed the same the other shareholders, St Vincent has their own airline, they no longer need LIAT.  Gonsalves no longer cares about LIAT and even when he did care about LIAT, he was only holding eleven percent of the losses.”

James Lynch insists that he has the recipe for making LIAT profitable.

His comments were made in the weekend edition of WINN FM’s The Bigger Picture.

“The recipe for making LIAT profitable is putting in professional management. Right now the board is ineffective and incompetent, when I say incompetent I don’t mean that they are incompetent in every area, they are incompetent in aviation. They know nothing about airlines, they nothing about aviation and they almost never have. They are put there on the board as political favors because they have done something for the party or they are friends of a politician.  What LIAT needs is professional management, remember LIAT is a monopoly in the Eastern Caribbean that is losing money. This is something that never happens in the world, you get a monopoly and you make money, LIAT is a monopoly that loses money.”

Among the measures proposed in the aviation consultant’s ten-point plan,  that LIAT’s current executive management be given immediate notice of termination, and that a new aviation savvy board of directors be mandated to seek other regional citizens for executive management positions who are qualified in the required skills as well as have experience in international or regional airlines.

Lynch’s drastic measures include encouraging the prime ministers concerned to direct broad objectives for a new board and then “withdraw totally from any and all involvement in the airline”.

Antigua-based commentator and analyst Arvel Grant says there is some merit in the Lynch proposals.

However, he argues that the problem of political interference in the airline by shareholder governments will be a difficult nut to crack. (WINN)