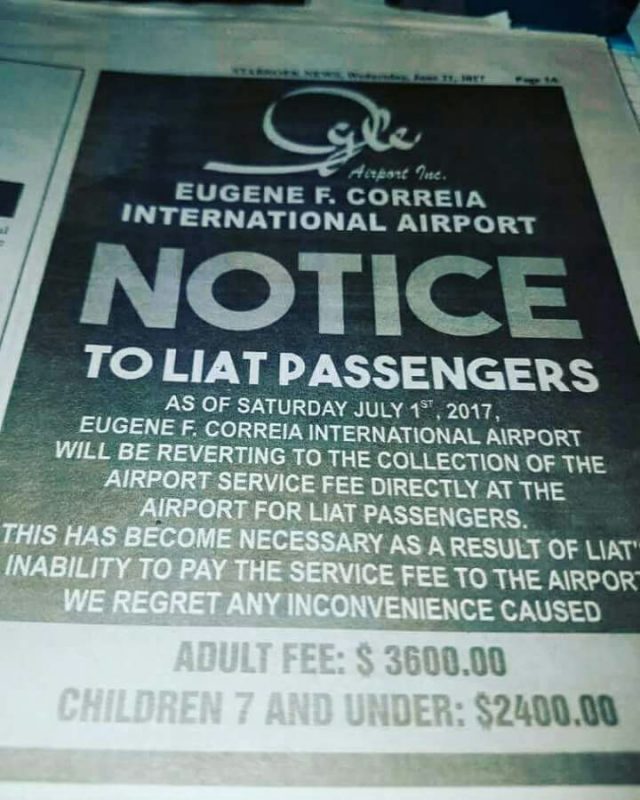 LIAT today committed to “on schedule” payments to an airport in Guyana which threatened to collect taxes directly from the airline’s customers.

In June, the Eugene F. Correia International Airport said from July 1 customers would no longer enjoy the convenience of paying airport taxes as part of their ticket costs.

The airport said it would implement that measure to LIAT customers only because the airline wasn’t paying the taxes it collected from passengers.

It would appear that the airport made good on its promise because the two entities announced in a joint statement today that “effective 1 st September 2017, this fee will be included in the LIAT ticket price and will appear on the LIAT ticket for any booking on LIAT for international flights departing Guyana from the Eugene F. Correia International Airport.”

The collection would have to be approved first by IATA.

LIAT also said that it is “committed to working with Ogle Airport’s management to ensure that the Airport is paid on schedule in accord with an agreed payment plan.”

Last week, the Guyana Civil Aviation Authority led by Director General, Lieutenant Colonel Egbert Field hosted a meeting with a team from LIAT led by Chief Executive Officer, Julie Reifer-Jones and representatives from the Ogle Airport Inc led by Anthony Mekdeci to discuss concerns relating to the airport Passenger Facilitation fee which LIAT’s passengers are required to pay for the use of facilities at the Eugene F. Correia International Airport (Ogle Airport Inc) and which is being charged to LIAT.

When the notice was published in newspapers in June it further underscored the financial problems at the airline.