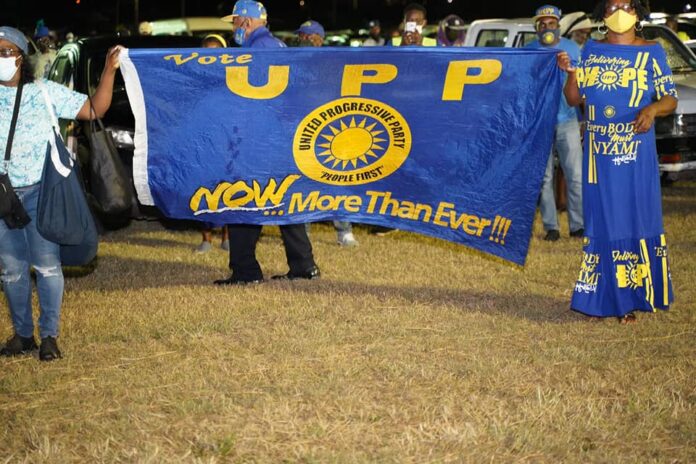 As the political warfare continues to get more & more intense, I will admit that I am impressed by the courage, the confidence & the enthusiasm that is been displayed by the UPP candidates towards this upcoming election .

Additionally, I also admire the personality, the mannerism, the charisma, and the eloquence of Mr. Lovell, who I think has some perfect attributes to become a Prime minister.

However, as I reflect back on the track record of UPP, especially during their time in office between 2004 & 2014, the data has not presented itself to convince me that UPP is qualified enough to be the best political party to manage the affairs of our country for next five years.

According to the record, Mr. Lovell’s constituents have rejected him more times than he has won at the polls. This then tells me that if the top is slack, then there is no doubt that those below would certainly be slack also.

On the other hand, Lovell’s age is a factor which cannot be overlooked. Obviously, Mr. Lovell is now cruising off into the sunset and as the leader of UPP,  his campaign policies & programs are clearly illustrating that he suffering from a weakness and deficiency to create new ideas to propel our nation forward & more so, to take the country to the next level.

Presently, many persons both young & old are scared of reliving another term under UPP’s administration. Many have bluntly indicated that they have not forgotten, neither have they forgiven UPP for putting the country into the hands of the IMF. To them, it was like living in hell.

Under the IMF program, people’s spending power instantly dropped. Persons immediately lost their jobs. Families began falling apart.  Breadwinners could no longer provide for their families. The nation’s best teachers & policemen were evicted from the system. Crimes began rising & the education system began crumbling. Life in Antigua was extremely scary back then.

On the other hand, Non-nationals were charged exorbitant fees to regularize their immigration statuses, their health care services & their work permits. Monies were badly spent & misappropriated by the UPP administration, causing the country to eventually be plunged into darkness several times, due to a lack of generated power. The supply of water to the populace also had its challenges. Disappointedly the nation’s utility resources were just falling apart because of lack of proper maintenance.

SembCorp & APC as two private utility enterprises came to the nation’s rescue but because of UPP’S incompetence of managing the country’s finances, these companies ended up been owed large sums of monies and in retaliation, both companies were forced to hold the nation at hostage so that they can be paid their monies. Of course, the list of UPP’s incompetence can go on & on.

It is sad to say but the local economy began collapsing under UPP.  The economy was definitely on the verge of becoming a failed state. Foreign investors had no confidence & credibility in UPP’s governance. As a result, to generate revenue UPP resorted to selling our patronage such as the Royal Antiguan hotel for a pepper corn price. PCS, our telephone company & State Insurance were next in the pipe line to be sold. Thank God the Labour party challenged them & stopped them along the way.

It is my view that UPP no longer has the confidence of the citizenry and to add salt to a wound, the candidates that UPP have now selected to run the affairs of this country is certainly unattractive & very unappealing. Their reputations are left to be desired.

It will definitely be against my conscience & my constitutional pride to give anyone of the UPP’s candidates my sacred vote.

I think the development & progression of Antigua  and Barbuda has reached too far under the Gaston Browne’s administration to make a change now. Therefore, I am of the firm view that it would be a grave mistake and furthermore a sin to return the governance of this country back into the hands of UPP once again.