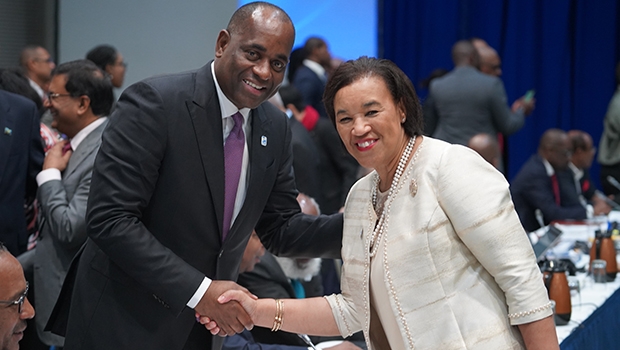 As a single geographical unit, the constant intent of the larger Caribbean nations to dominate the psychological space of a bewildered regional public is simply unacceptable.

It is baffling why, even in times of turmoil fueled by escalating wars and widespread pandemic, the Prime Minister and Government of Jamaica would wish to insert their own candidate ( reputedly a citizen of Canada) into the “non-race” for Secretary General of the Commonwealth.

The position, currently held by Dominican-born The Right Honorable The Baroness Patricia Scotland, QC of Antiguan and Barbudan parentage, is NOT “up for grabs “.

In 2016 when the eminently qualified Baroness was voted into office fairly and squarely by the majority of the 54 Commonwealth countries, it was expected that she would serve for two terms (8 years ).

She has executed her role with professionalism and poise, advancing the progress of many nations through dialogue and direction.

She is overwhelmingly supported by the Caricom (Caribbean Community)  member states . The more informed and rational leaders have expressed their content with the work that Baroness Scotland continues to do.

As a Jamaican, the attitude of my government can only be described as embarrassing . While we all understand the craving for total independence , and while many comprehend the meaning behind the call for reparations , the blatant effort of the Jamaican Prime Minister to berate the Queen’s representatives , the Duke and Duchess of Cambridge , on their recent state visit to Jamaica was totally undignified and unnecessary.

If the Honorable Prime Minister felt so strongly about the significance (or lack thereof) of the Royal visit , it was his prerogative to decline at the time that initial letters of intent were exchanged . The proud figurative beating of his chest was a clarion call for political attention . Further , it is paradoxical that Hon .Andrew Holness should wish to proffer a candidate for a position within an organization headed by none other than HM Queen Elizabeth ll !

The Jamaica Observer of today ‘s date reports Antigua and Barbuda’s  Prime Minister , the Honorable Gaston Browne , as saying : “I think Jamaica’s proposed candidate for Commonwealth Secretary General is a monumental error , which could only serve to divide the Caribbean .” Well said , Mr. Prime Minister . I can safely assume that other Caribbean luminaries like the Hon. Mia Mottley (Barbados) and the Hon. Roosevelt Skerritt (Dominica) would agree with you wholeheartedly.

From my observation, Baroness Scotland has played fair ball — highlighting issues which affect all nations of the Commonwealth. For her, each state is equally as important. She knocks on the doors of all countries and continents . But if the overall situation is assessed, it appears that the “Big Boys” like the United Kingdom and Canada have introduced subtle bullying tactics. These powerful nations are continuously attempting to rid the Commonwealth of a leader that they regard to be excessively in favour of the smaller, more fragile island developing states . Is their latest seeming support of Jamaica’s newly-announced, freshly-minted candidate another case of divide and rule ?

In this life, will we ever come to terms with fairness, equity and peace? Will we forever be striving to short-change and trample upon each other? Will the political back-biting and character brutalization ever stop ? There is little wonder that we find ourselves in a world wounded by human greed and ambition.

Well said, Prime Minister Gaston Browne. “Our consensus decisions should never be broken without overwhelming cause; that will not undermine the unity of our integration movement or violate the treaty provisions”. It is expected that other Caribbean Heads of Government will voice their public support for the Baroness in short order.

If we cannot stand together, then we will fall apart .