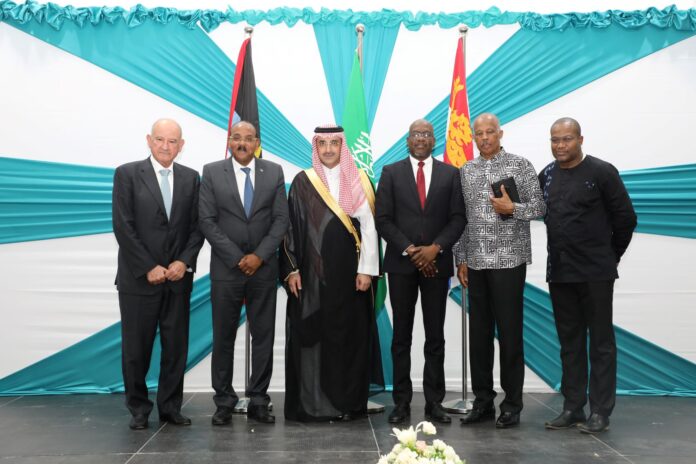 Is This Treating With $80m Loan?

The presence of Saudi Arabian officials on the eve of Antigua’s election 2023, providing a platform for the lame duck Prime Minister for campaign treating, with the collusion of our University of the West Indies Fifth Campus, is frightening.

Even talking about it gives me the shivers when I remember the journalist who spoke out and got dismembered for his exposure.

The political oversight seem to be in denial as are the politicians who are in the photo with the present Saudi Officials, Chairman of UWI, Vice Chancellor of UWI, Minister of Education, Antigua and the Prime Minister. This ceremony was witnessed by the Governor General and a cross-section of the hierarchy of Government and the Who’s Who of Antigua’s society.

Are we to understand that no one in that prestigious crowd on the eve of our National Election saw the error in hosting such an event, clearly creating a platform for what appears like campaign treating, by the signing of a Saudi loan of US $80 Million,  ostensibly for a good cause – the expansion of our UWI Campus.

Clearly the Court judgment against the Dominica PM and his Party for ‘treating’ has not been absorbed by those who organized this event, and once more our little island is complicit in accepting big money under unacceptable circumstances. What is even more disconcerting is the University colluding with this activity on the eve of an election.

These are the hands into which we have placed our young minds to be moulded in integrity and uprightness. How this could have been allowed to happen in the absence of the Legislature and the Executive?

The House has been dissolved!

UWI owes the nation an explanation and an apology as those concerned are the creators of teachers, the educators on whom we rely for guidance. The Vice Chancellor needs to face the nation and if necessary, tell us it was a now or never timing and he had no choice.

He needs to say at the same time that his first error was taking the Five Islands school without an explanation, and a commitment to restoring the early education building plus a special pedagogy department for the island. Please UWI do not mess up your name!