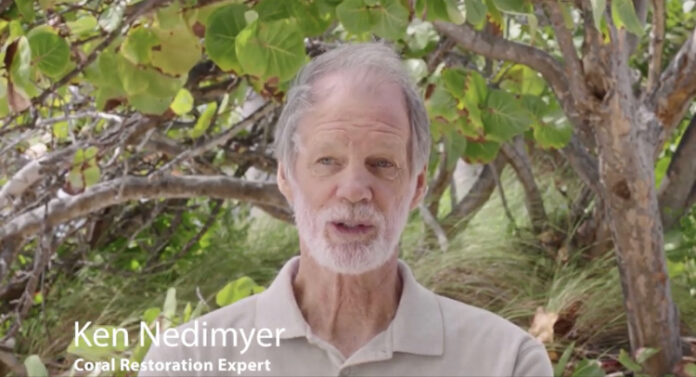 The Elkhorn Marine Conservancy (EMC) is a newly established non-profit dedicated to enhancing the resilience and local stewardship of Antigua’s marine ecosystems through restoration, collaborative management and conservation.

Named after the iconic elkhorn coral that once defined many of Antigua’s reefs, the EMC was founded in response to growing concerns over the deteriorating health of nearshore ecosystems.

Coral reefs have suffered extensive degradation in the past several decades due to a combination of factors including regional disease epidemics in important coral and herbivore species, pollution, coastal development and dredging, overfishing, hurricanes and climate change.

The EMC’s first large-scale initiative is a coral reef restoration project, which aims to enhance the health and resilience of coral reefs by increasing the abundance and diversity of stony corals, particularly branching elkhorn and staghorn corals.

These corals are the backbone of Antigua’s eastern coastline, dissipating strong wave activity from the Atlantic, providing complex habitat for fish and invertebrates and supporting the area’s important coastal and marine tourism sectors.

Now listed as critically endangered on the International Union on the Conservation of Nature’s Red List, we risk losing these species altogether along with the important ecosystem goods and services coral reefs provide.

To help the reef recover, the EMC will grow a diversity of locally-sourced coral fragments in an underwater nursery, and, once they’ve reached a sufficient size, plant them back onto degraded reefs.

Throughout this project, the EMC strives to increase environmental stewardship and reduce local impacts to the environment through collaborative management with primary stakeholders, educational programming, outreach and advocacy.

The EMC will also conduct scientific research and incorporate innovative approaches into the project’s design to increase the effectiveness, scalability and cost-efficiency of restoration activities throughout the region.
The project’s pilot area is limited to the eastern coast of Antigua, between Nonsuch Bay and Exchange Bay.

The EMC seeks to expand the scope of their efforts in the coming years.