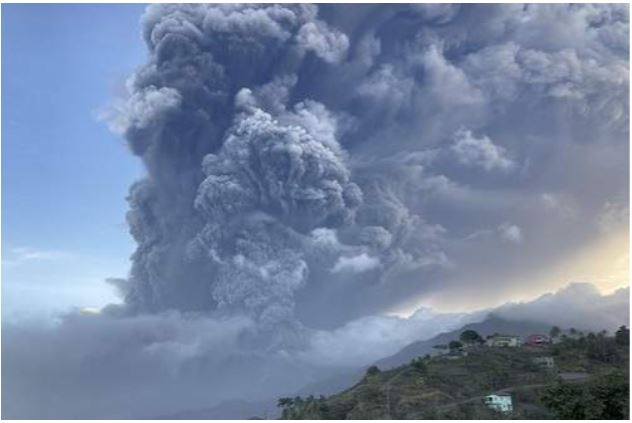 The La Soufrière volcano continued its eruption on Friday sending a column of ash, estimated at roughly 8,000 meters, towards the west of the island, the Seismic Research Centre (SRC) of the University of the West Indies (UWI) said.

It said that the explosion occurred at 6.15 a.m. (local time) and that the period between explosions has now lengthened to more than 40 hours.

“Seismic activity at La Soufrière has changed its pattern. The last of a series of bands of tremor ended at about 5:40 am and, unlike all the previous bands, had no strong venting or explosive activity associated with it,” the SRC had said in a bulletin prior to the latest explosion.

The SRC, which has a team monitoring the volcano that had its first explosive eruption last Friday, said seismic activity at La Soufrière continued as before with a near-constant swarm of long-period and hybrid earthquakes.

“There was one band of low-level tremor at 9 pm (local time) on 15 April which lasted about 40 minutes and may have been associated with a small increase in venting,” the SRC said, noting that the first successful measurements of sulphur dioxide (SO2) flux at La Soufriere were undertaken along the west coast and yielded an average SO2 flux of 809 tonnes per day.

“The volcano continues to erupt although explosive activity appears to have ended at this time. Its current pattern of seismic activity may indicate growth of a lava dome, but this has not yet been confirmed,” the SRC said.