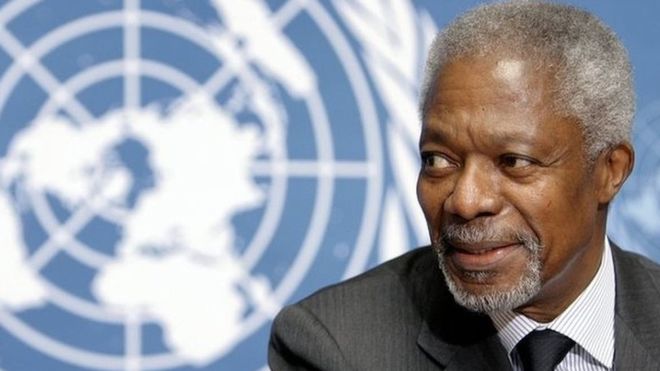 Kofi Annan, the only black African to become UN secretary-general, has died.

The 80-year-old “passed away peacefully on Saturday after a short illness”, the foundation named after him said.

His home country, Ghana, has declared a week of national mourning. Mr Annan served two terms as UN chief from 1997 to 2006, and was awarded a Nobel Peace Prize for his humanitarian work.

He later served as the UN special envoy for Syria, leading efforts to find a solution to the conflict.

In a statement announcing his death, the Kofi Annan Foundation described him as a “global statesman and deeply committed internationalist who fought throughout his life for a fairer and more peaceful world”.

“Wherever there was suffering or need, he reached out and touched many people with his deep compassion and empathy.”