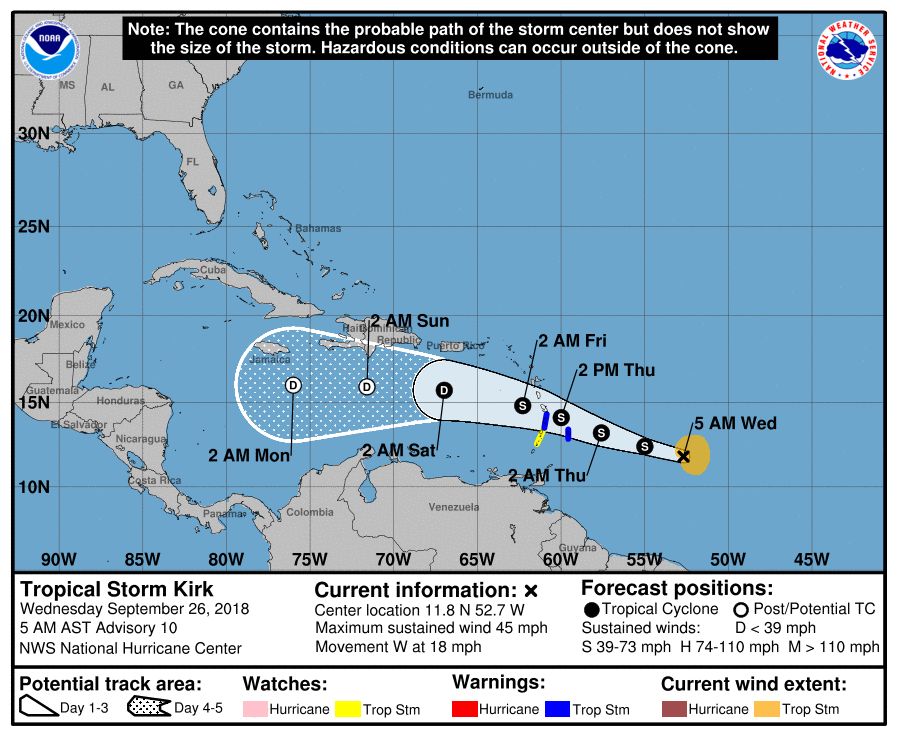 A tropical storm warning has been issued for Barbados and St. Lucia after the depression Kirk regenerated into a tropical storm over the Western Tropical Atlantic on Wednesday.

A tropical storm watch has been into effect for St. Vincent and the Grenadines as Kirk, with maximum sustained winds of 45 miles per hour, is located 470 miles east of Barbados and 595 miles east south east of the French island of Martinique.

The Miami-based National Hurricane Centre (NHC) in its 5.00 am (local time) bulletin, said the center of the storm was located near latitude 11.8 North, longitude 52.7 West and is moving toward the west near 18 mph.

The NHC said that a westward to west-northwestward motion is expected through Friday night and that on the forecast track, Kirk is expected to approach Barbados and the northern Windward Islands Thursday afternoon and move into the eastern Caribbean Sea by Friday morning.

It said that the winds could strengthen as Kirk moves through the central Lesser Antilles Thursday afternoon and evening. Rapid weakening is expected on Friday after Kirk emerges over the

The NHC said that tropical storm conditions are expected to first reach the warning area by Thursday afternoon, making outside preparations difficult or dangerous.

“Tropical storm conditions are possible within the watch area by Thursday afternoon or evening,” it said, adding that Kirk is expected to produce total rainfall totals of four to six inches with maximum totals of 10 across the northern Windward and southern Leeward Islands from Barbados and St. Lucia northward across Martinique, Dominica, and Guadeloupe.

“These rains may produce life-threatening flash floods and mudslides.

September is usually the peak month for Atlantic hurricanes, recording more hurricanes in that basin than any other month on record. The hurricane season ends on November 30.