At the Annual General Meeting (AGM) of the Antigua and Barbuda Sailing Association (ABSA) held last month, the members unanimously elected Karl James OLY MBE as the new President. In a milestone moment for the association, Geoffrey Pidduck, founder of the organization 30+ years ago, informed the members at last year’s meeting of his intention to stand down. The obvious choice to take on the role is Antiguan sailor Karl James who was recently awarded an MBE by Queen Elizabeth II for his contribution over 35 years to yachting in Antigua & Barbuda.

A two-time Olympian in the Laser Class, Karl James started sailing in Antigua at the age of 12, when the largest yacht in English Harbour was 60 feet. Since then, he has achieved multiple awards in various sailing classes both as helmsman and professional crew, competing internationally in over 75 countries. Over his extensive sailing career, he has successfully helmed various classes to the podium including the Laser, Dragon, Sunfish, and 6 Meter. At the 2001 Sunfish World Championship, Karl claimed the silver medal, a level of achievement still unsurpassed today by an individual athlete in Antigua. In home waters Karl has won every major sailing event in the Caribbean and has single handedly won the Caribbean Laser Championship 6 times.  In addition to his personal campaigns, he has worked professionally as tactician/trimmer/midbowman aboard several legendary superyachts.  Notable achievements among these are the 3 World Championships won aboard the J Class “Ranger” and the 10 years with Sir Peter Harrison on “Sojana” during which time she first won the Lord Nelson Trophy in 2011.

Competition is only part of Karl’s contribution to the sailing community.  In the greater Caribbean he is recognized as a pioneer in sailing education, holding the position as Manager of the Dinghy Sailing Program at the Antigua Yacht Club for almost thirty years.  He devotes his efforts to developing local youth, ages 6 – 25, into the sport to create a lifelong love for sailing. He recognizes that in Antigua the sport of sailing offers a direct pathway to a career.  Many of his former students work in the yacht industry – instructors in water sports hospitality, captains of charter yachts and tour boats, officers of Coast Guard and US Navy, professional athletes in the America’s Cup or as international Coaches.  At the Antigua Yacht Club, he is recognized for running a “tight ship” for the junior sailors based on clean living and accountability.

About his new role as President of the ABSA Karl James says “I am very aware of the incredible work Geoffrey Pidduck has done over the years to get the ABSA to this level.   I am very thankful for his tremendous support and friendship throughout.  I am focusing on carrying his work forward for the benefit of the sport of sailing in Antigua. I intend to bring to the ABSA my experience as an Olympic athlete, professional superyacht crew, sailing Coach, regatta committee member and manager of Sailing Youth Development programs.   I give myself the same advice that I give to my junior sailors: “Be willing to learn, create goals, keep options open and talk to people in the industry.  We are all ambassadors for Antigua. Give back and help others to grow in our community.”  To succeed, work is inevitable, but if you do what you love, it won’t seem so hard.

Outgoing President Geoffrey Pidduck has been nominated by ABSA for Sportsman of the Year for his contribution to the sport of sailing and its development in Antigua and Barbuda. 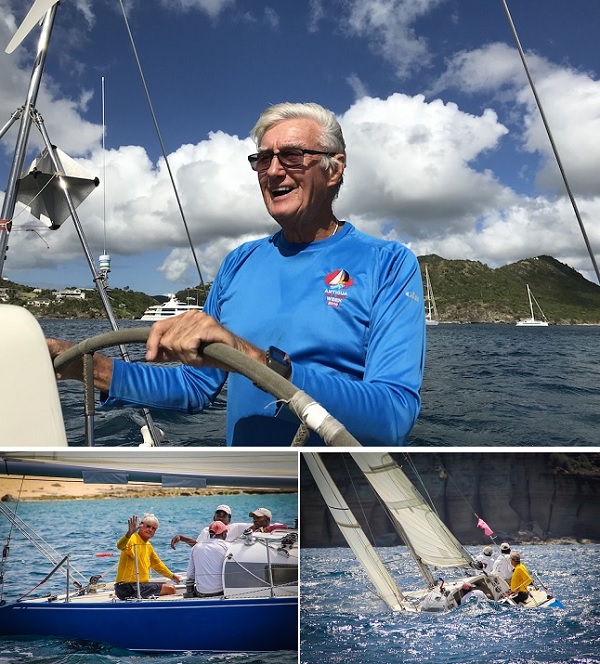 Following the ABSA AGM, Geoffrey commented “It has been a privilege and pleasure to have played a part in the growth and success of the Yachting industry. Since returning to Antigua in 1982, we have seen sailing grow. A large part of our focus has been on Development, leading to pathways for Antiguans. I am delighted to pass on the responsibility for the association to an Antiguan who has been on this journey with me for many years and look forward to where Karl James’ leadership can take the sport in the future.”