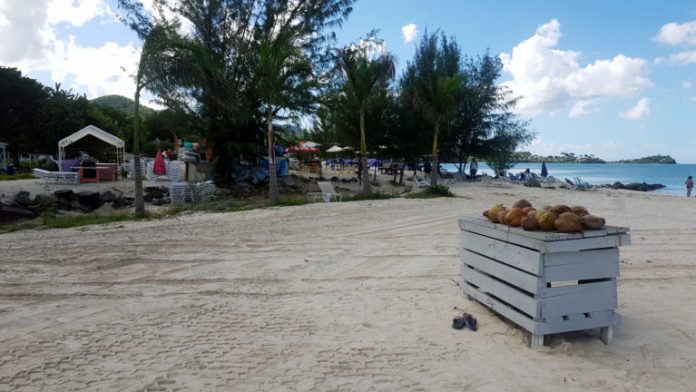 Vendors were left in distressed on Friday morning when officers from the Development Control Authority (DCA), enforced a relocation order that was issued months ago to beach chairs and other vendors operating in the Jolly Harbour area.

The vendors revealed that the officials removed chairs and other structures that were erected by them, and displaced them at the Sir Vivian Richards Cricket Ground at North Sound for storage.

The vendors were subsequently told that they would have to reclaim their property at their own cost.

The vendors, who sell and/or rent beach chairs, souvenirs and food and beverage items during the tourist season, allege that the Special Economic Envoy for Antigua and Barbuda Calvin Ayre had been actively seeking to buyout several vendors in the area to make way for his restaurant and other business interests.

“They think that they can use their money to buy us out,” said 29-year-old Kailer Tonge.

The vendors claim that the duo of Calvin Ayre and Prime Minister Gaston Browne had already paid a few vendors for the spaces which they occupy at the beach.

“So they realise now that they can try to do that with everybody, but we don’t want that. We want to stay where we’re at and make our bread… our honest dollar… we don’t want any easy money and we want to work hard for our money like we usually do every season.”

The vendors said that since Ayre acquired properties in Jolly Harbour, neither he nor his representatives have reached out to them.

In July of this year, the vendors were given two working days to remove all their belongings and seek permission from the relevant authorities for a suitable relocation site.

However, they were given an extension of that time following a meeting with Tourism Minister Charles “Max” Fernandez.

Earlier this year, the restaurant, allegedly owned by Ayre, implemented a policy whereby patrons would be able to make use of the beach amenities provided by the restaurant free of cost.

According to the vendors, they are not harassing or disturbing the restaurant guests in any way.

“The tourists love us and the vibes that we bring,” Tonge said.

“The tourists want more local stuff, they don’t want the ‘high-soci’ stuff,” she continued. “They want to be down to earth. They want the rum punch; they want everything local… local food and so on.”

They pointed out that not all of them necessarily share the same position or have the same resolve on the issue of the ongoing displacement.

“We have a few vendors who will stand up,” said Tonge, “but we need backing and we need to go the right way.”

Tonge added that after they had further discussions with DCA officials later in the day, both parties agreed that the vendors continue to ply their trade provided that they packed up their belongings and stored away from the beach at day’s end.