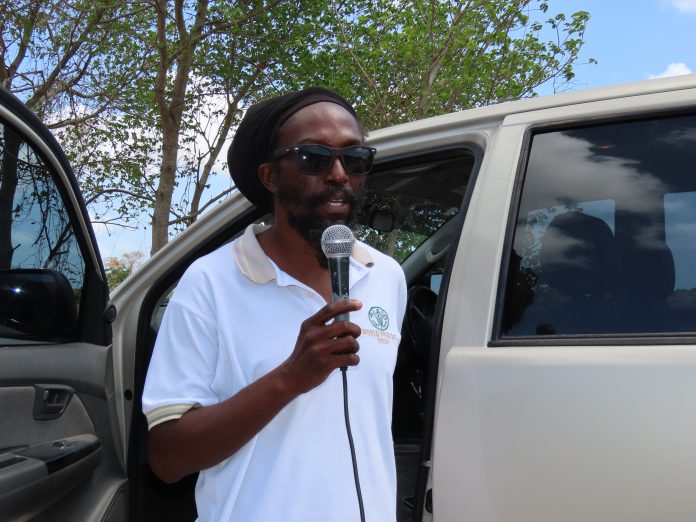 A collaborative effort is being undertaken between the National Solid Waste
Management Authority within the Ministry of Health and the Ministry of
Agriculture to see how green waste can contribute to food security within the
crop and livestock industries while at the same time, controlling the quality and
quantity of waste ending up at the Landfill.

On Thursday of this week, a team from both ministries journeyed to the Burks
Agricultural Settlement to witness the demonstration of shredding green waste
generated from the clearing of lands in the area when the dam expansion project
was undertaken not too long ago.

The demonstration focuses on the depletion in green waste and a solution to
waste diversion, as it will help to reduce the amount of organic bulk waste going
to the landfill while converting solid waste to a product that can be used as

livestock food and to even enhance the country’s ecological footprint in terms of
climate change.

Acting Director of Agriculture, Mr. Gregory Bailey explains that this project will
capitalize on the multifaceted characteristics of green waste material.

“The focus here is to use green waste and convert to a more valuable material,
which can be used by crop and livestock farmers and at the same time, diverge
waste from going to the landfill and reducing the bulk waste reaching the landfill,”
stated Mr. Bailey.

In terms of crop production, the material will be grinded to a size where it can be
incorporated into the soil as a soil enhancer, which will adjust the soil structure
and even its fertility. It can also be used on the soil surface as mulch in order to
retain the soil’s moisture.

This project will also aid in the issue of climate change and how the country plays
a part in this? Mr. Baily explains.

“A lot of times, these bulk waste from the clearing of lands, end up in the landfill
and occupy unnecessary space; in addition to that, if they do not reach the
landfill, farmers tend to burn them at certain times of the year which releases
carbon dioxide into the atmosphere.”

The acting director of agriculture also stated that currently, the Ministry of
Agriculture is in the process of seeking a designated area to create a centralized
plant where this activity be done and they are also in the process of reaching out
to the farmers to see if it is a technology that they would want to implement at a
farm level.

General Manager of the National Solid Waste Management Authority, Daryl
Spencer, said that this project can remove up to 40% of waste, which goes into
the landfill.

This is very important, according to Spencer, as small countries like Antigua and
Barbuda, have limited space, which needs to be preserved as much as possible.

Mr. Spencer stated that the last time they tested the equipment, it generated up
to twenty (20) tons of green waste within forty-five (45) minutes.

According to Spencer, this project really highlights the importance of collaborative
efforts between organizations to work to address issues which will result in the
betterment of the country.

“It shows that all organizations, all government departments must work together,
because together we have the necessary resources to make the change,” said Mr.
Spencer.

Following this project, the National Solid Waste Management Authority and the
Ministry of Agriculture, will be working on another project, which is a follow up to
this project, which seeks to mulch and shred the wood chips to be used for
composting, which will be given to farmers.

Is considered very timely, as each year, numerous amounts of green waste is
dumped into the landfill.