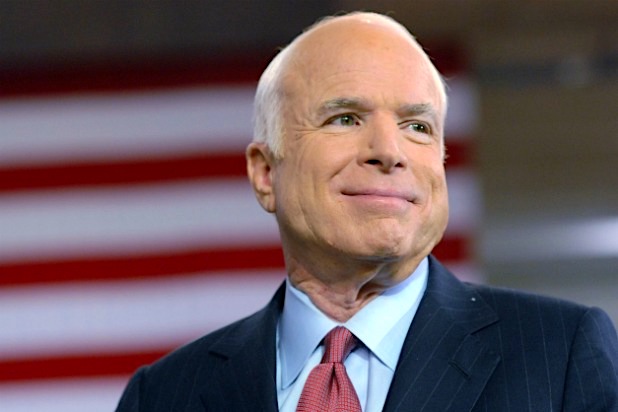 Mr McCain died on Saturday in Arizona surrounded by his family, a statement from his office said.

He was diagnosed with an aggressive brain tumour in July 2017 and had been undergoing medical treatment.

His family announced on Friday that Mr McCain, who left Washington in December, had decided to cease treatment.

His widow, Cindy, tweeted: “My heart is broken. I am so lucky to have lived the adventure of loving this incredible man for 38 years. He passed the way he lived, on his own terms, surrounded by the people he loved, in the place he loved best.”

Mr McCain’s daughter Meghan said the task of her lifetime would now be “to live up to his example, his expectations, and his love”.

Following news of his death, wellwishers waving flags lined the street as a hearse brought Mr McCain’s body from his ranch in Sedona, Arizona, to a funeral home in Phoenix.Image captionMourners waited outside the funeral home in Pheonix, Arizon

The six-term senator for Arizona and 2008 Republican presidential nominee was diagnosed after doctors discovered his tumour during surgery to remove a blood clot from above his left eye last July.

His family said he would lie in state in Phoenix, Arizona, and in Washington DC before a funeral at the Washington National Cathedral and his burial in Annapolis, Maryland.

Former presidents Barack Obama and George W Bush are expected to give eulogies.

The son and grandson of Navy admirals, Mr McCain was a fighter pilot during the war in Vietnam. When his plane was shot down, he spent more than five years as a prisoner of war.

While in the custody of his captors, he suffered torture that left him with lasting disabilities.

In politics, he took a conservative line on many issues, including opposing abortion and advocating higher defence spending. He backed the 2003 invasion of Iraq and criticised President Obama for not intervening more in the Syrian civil war.

However, he also gained a reputation as a Republican maverick who was willing to cross party lines on a range of issues.

In July last year, just after his diagnosis, he took part in a late-night Senate session and gave the deciding vote – with a thumbs-down gesture – against partially repealing the contentious Obamacare healthcare law. The move reportedly infuriated Mr Trump.