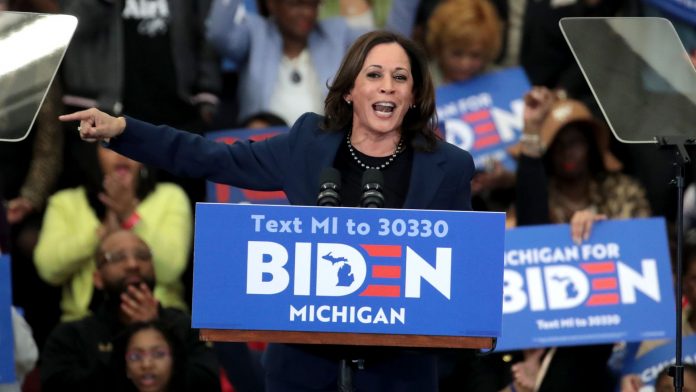 Joe Biden announced Tuesday that he has chosen Sen. Kamala Harris (D-Calif.) as his running mate — the first Black woman to be named to a major-party U.S. presidential ticket, and potentially the first woman vice president if Biden defeats President Trump.

The big picture: Harris was probably the safest choice Biden could have made among his running mate finalists. She has a national profile and experience with elected office, was vetted and tested in the Democratic presidential primaries and can boost Biden’s fundraising.

What he’s saying: “I need someone working alongside me who is smart, tough, and ready to lead. Kamala is that person,” Biden announced in a statement.

Between the lines: The pick gives Biden a running mate with strong prosecutorial skills, as Harris has proven at Senate hearings and during her strongest debate moments. That could help them make the case against Trump in the fall.

The backstory: Harris, who at 55 is more than 20 years younger than Biden, is a former prosecutor and has been a senator from California since 2017.

She had been seen as a front-runner when she announced her presidential campaign in January 2019, but she was never able to capitalize on the early momentum — except for a brief spike in public attention after her confrontation with Biden over federally mandated school busing at a June debate.

As a presidential candidate, Harris campaigned on a $500-a-month tax credit that she called “the largest working and middle-class tax cut in a generation.” She started out as a supporter of Medicare for All, but then switched to an alternative that would have preserved a role for private insurance.

Harris has also faced some criticisms based on cases she argued and policies she enacted as California’s attorney general:

Reality check: It will be Biden who sets the policies if he wins — but Harris’s record will be relevant if she’s elected vice president, especially if she takes ownership of specific issues and projects as Biden did when he was Barack Obama’s vice president.

What’s next: Harris’s speech accepting the nomination at the Democratic convention will be her chance to introduce herself to an audience of general election voters — and to show how well she and Biden will be able to work as a team.