The government has admitted to breaking its promise of job creation on the Knuckle Block project in Gray’s Farm for men and women of the community.

At the start of the project, officials boasted that 40 percent of youth would be guaranteed jobs at the constriction site.

However, Parliamentary Secretary in the Ministry of Social Transformation Londel Benjamin confirmed that only 20 percent of locals have found jobs there.

The remaining 80 percent of workers are Chinese.

Benjamin said the promised employment did not materialise “because of lack of materials at times.”

“The Chinese are not prepared to wait so they push along and so some of our folks have been left behind,” Benjamin confirmed.

The project is expected to be handed over to the government in June. It will feature an indoor basketball court, community center and other facilities. 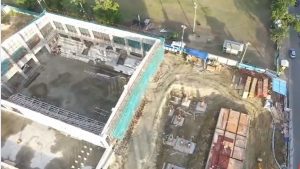