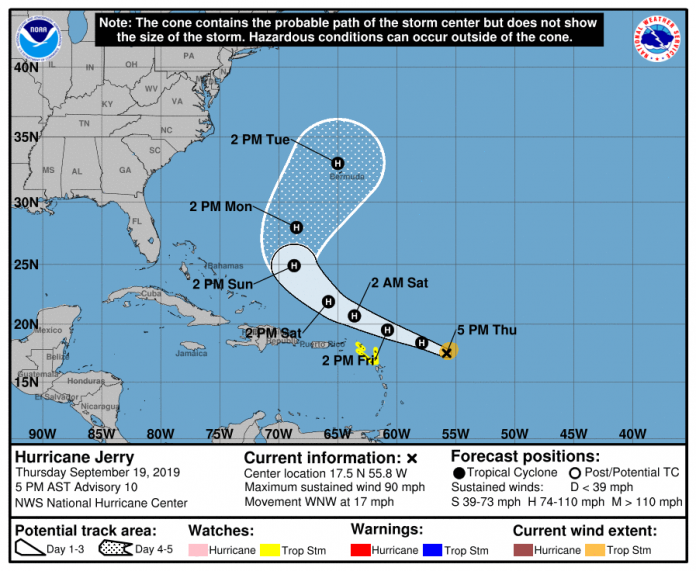 Weather Officials say at 5 pm, Jerry is forecast to most likely pass even further away from Antigua and Barbuda on Friday.

Climatologist Dale says the probability of storm-force winds for each island is less than 10% with Antigua at 4% and Barbuda at 5%.

The watch issued for Barbuda yesterday will therefore be dropped at 8 p.m he reported.

At 500 PM AST (2100 UTC), the eye of Hurricane Jerry was located near latitude 17.5 North, longitude 55.8 West. Jerry is moving toward the west-northwest near 17 mph (28 km/h). A west-northwest to northwest motion at a decreasing forward speed is expected over the next few days.

On the forecast track, the center of Jerry will move north of the northern Leeward Islands Friday, pass well north of Puerto Rico on Saturday and be well east-northeast of the southeastern Bahamas on Sunday.

Satellite and Air Force Hurricane Hunter data indicate that maximum sustained winds have increased to near 90 mph (150 km/h) with higher gusts. Jerry could strengthen during the next day or so before weakening is anticipated by this weekend.