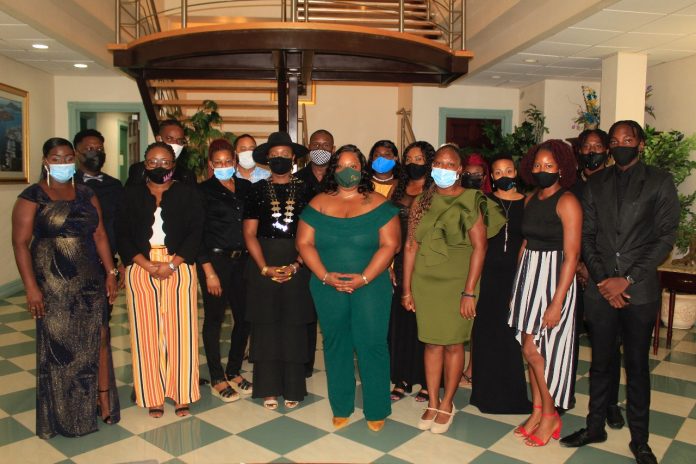 The event marked its fourth annual staging, but due to COVD-19 heath protocols, took a slightly different approach. The gala-type affair took place in a mixed virtual setting with only the awardees and production team at the Office of the Prime Minister while over a thousand viewers and supporters tuned into the live feed via Facebook to witness the awards gala. 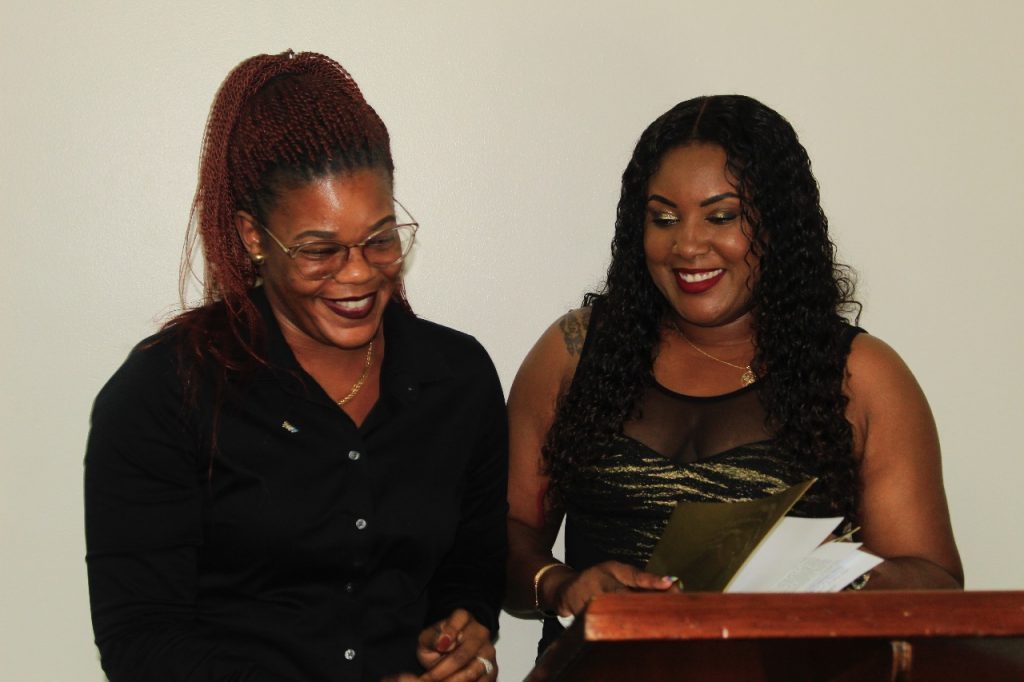 According to Co-Chairs of the YEP Committee, Samara Emmanuel and Derrica Watson, despite the difficulties being faced because of the global pandemic, the annual awards event was a pivotal endeavor for the committee. “This year, the awards meant so much more because we have all recognized the resilience of our young people across the island. And what better way to recognize them, than to join with the corporate community to award these entrepreneurs,” Co-Chair Samara said. 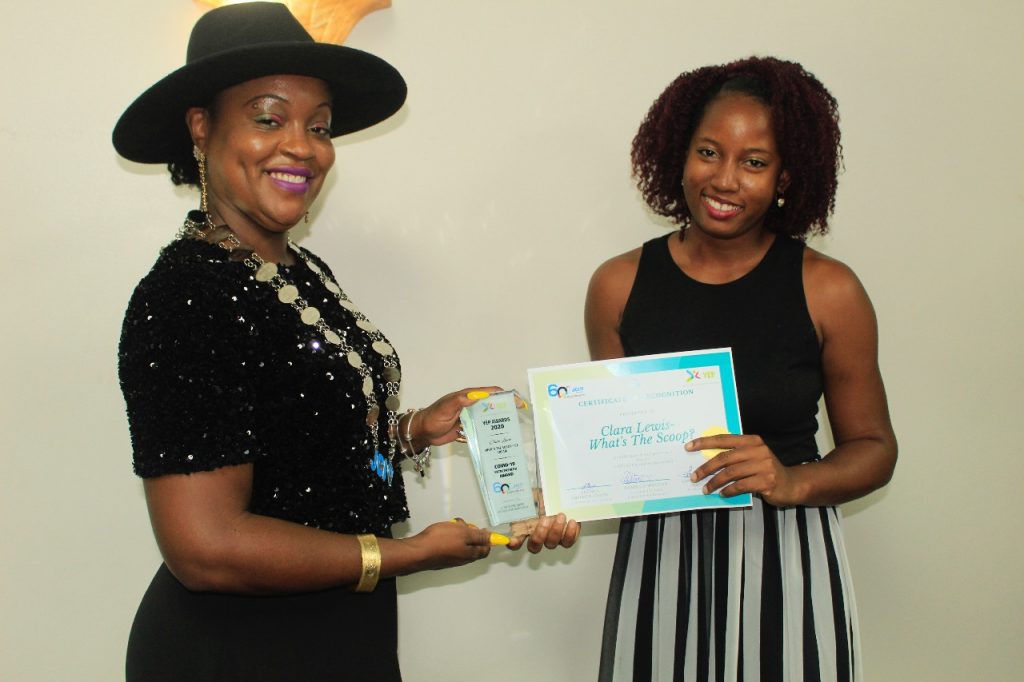 Derrica continued, “The 10 Entrepreneurs awarded that night, the young professionals in Antigua and Barbuda who, despite these unpredictable and unprecedented times, have managed to put their entrepreneurial skills to use during the COVID-19 pandemic, we say to them, continue to blaze a trail that will inspire others to follow.” 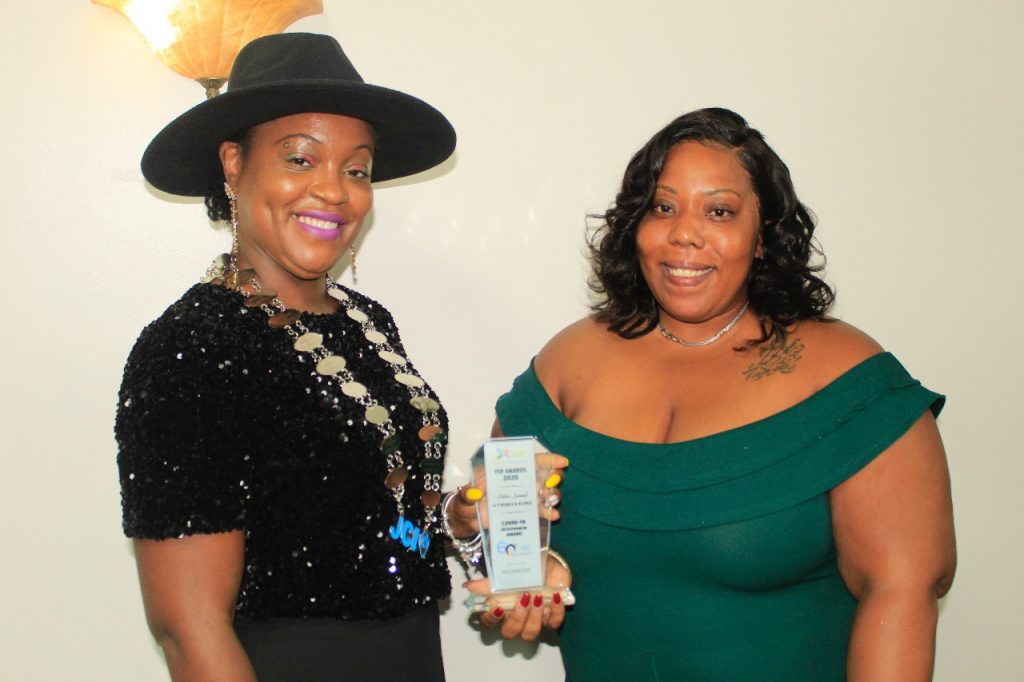 The ten awardees were all between the ages of 18-40, with a 19-year-old being the youngest recipient. However, according to committee members, the highlight of the awards gala was hearing the stories of trial and trumpet of each awardee that night. 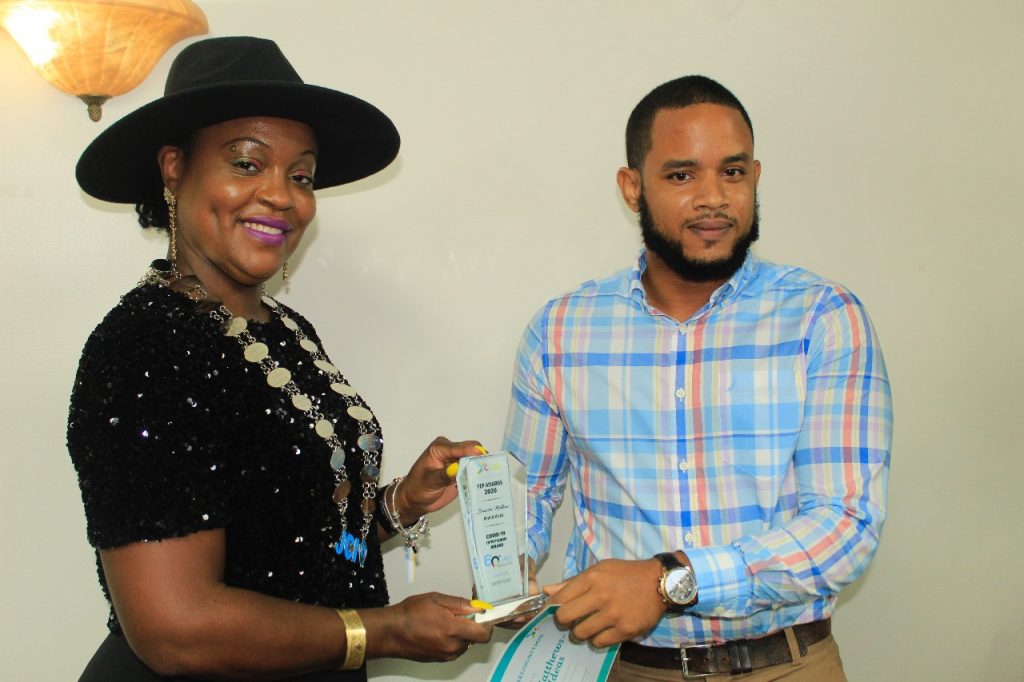 The awardees included Ms. Clara Lewis, a twenty-nine-year-old who owns and operates ‘What’s The Scoop?’, homemade ice cream, a small business launched in June 2020. According to Clara, “I started my business a few months after losing my job as a Chef at a local Hotel due to Covid19. I was running low on funds and having a child to support. Starting a business was always a dream of mine but I never thought it would have become a reality especially during a worldwide crisis such as this.” Clara revealed that she started selling mangoes to survive. “I stop selling Mangoes by mid-May and by faith used my last $100 to buy ingredients needed to make Ice Cream.” The awardee said. 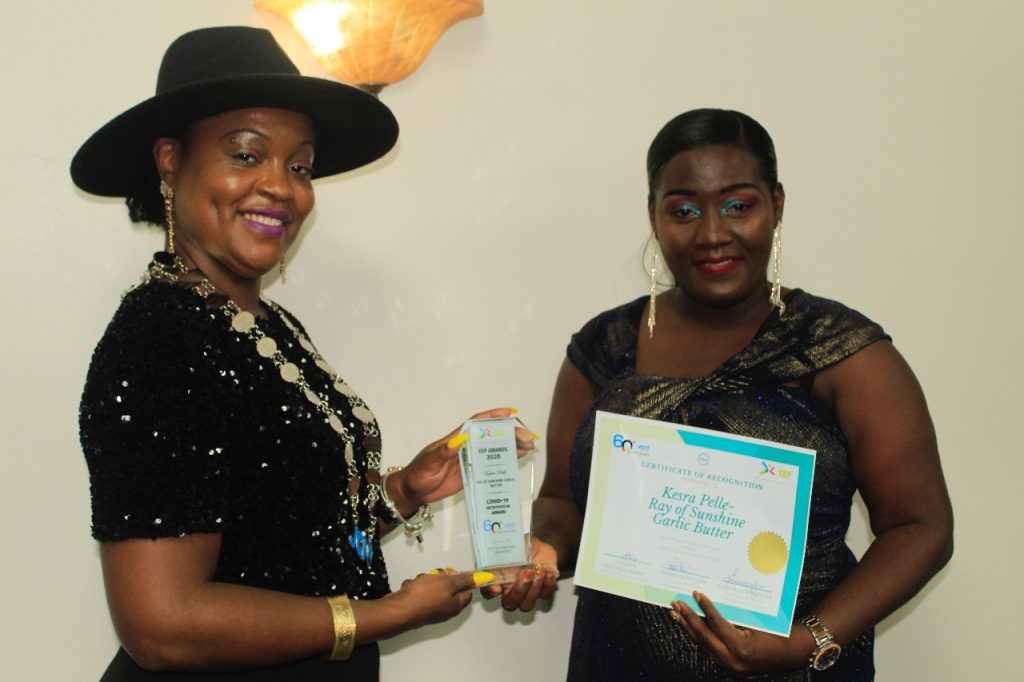 Eldica Samuel of El’s Bowls & Blends, a small business that was only birth in July 2020, was also a recipient of the coveted award. Eldica indicated that although she is employed in government, she needed to find ways of augmenting her income to help support her family. 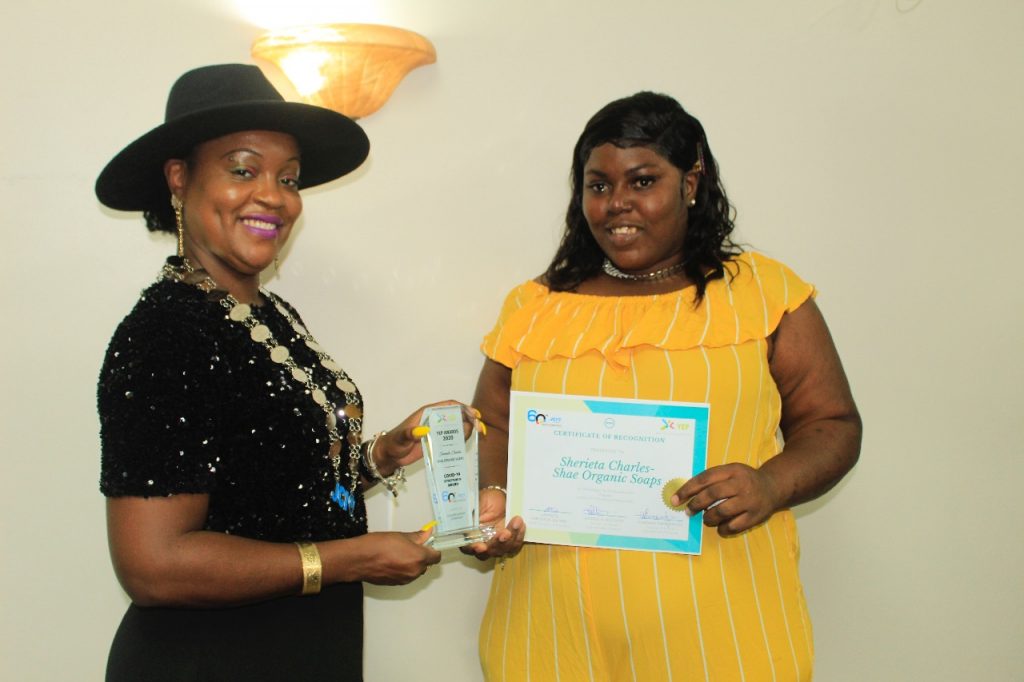 The youngest awardee that night was Jakobi Gilgeous, a nineteen-year-old who saw the restricted movement of people because of COVID-19 as an opportunity to launch his business, ‘Errands4You’, a Delivery and Concierge service provider which started at the cusp of the pandemic in January 2020. 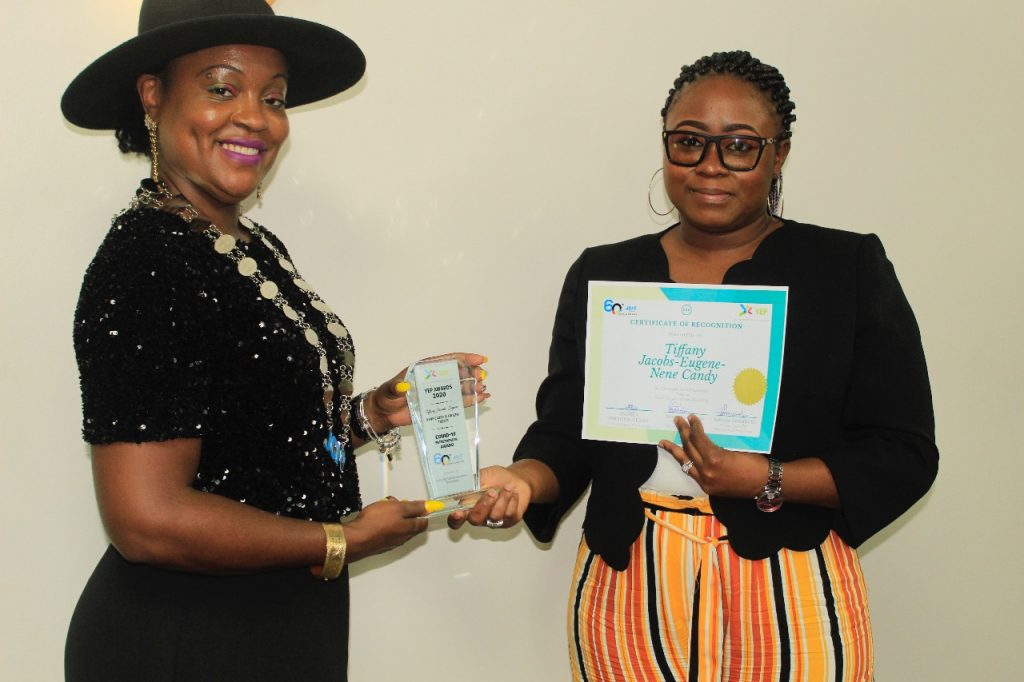 Twenty-year-old Javhone Miller, also received the auspicious award as he started his retail business, ‘TopBrands268’ in August 2020. Javhone indicated that running a business has not been easy, but it is quite rewarding.

Mother of two, Kishma Joseph-Dupuis was one of the ten awardees that night. Kishma owns Kishee’s Treats and Things which started in June 2020 after she noted the importance and sustainability of offering snacks and household items retail, and at an affordable rate.

Brandon Matthews of ‘Bridged Ideas’ Graphic Design was a financial victim of the pandemic after his place of employment was forced to close for several months due to COVID-19. However, Brandon indicated that it was because of this downtime that he was encouraged to finally get the ball rolling on creating his own business, and with that launched the company in August of this year. Brandon joined his colleagues that night as he received the COVID-19 Entrepreneur of the year award.

Twenty-eight-year-old Kesra Pelle of Ray of Sunshine Garlic Butter was also a victim of the economic fallout from COVID-19. After losing her job as a result of a hotel closure earlier this year, Kesra decided not to become a victim of her circumstances and started making local garlic butter to fill a void in most supermarkets due to import issues. After officially launching in August 2020, Kesra’s product can now be found in over fifteen (15) supermarkets and shops across the island. Kesra also received the COVID-19 Entrepreneur of the year.

Also receiving the award was Tomeka Cole, a twenty-eight-year-old business owner who operates ToMeeks Retail Outlet which started in May of this year.

The tear-jerker of the night was Sharieta Charles of Shae Organic Soaps. After an emotional award acceptance, Sharieta revealed the main inspiration behind her business. “For several years particularly throughout my school life I was scorned and looked at differently because of my skin. I used several products and soaps in an attempt to help to no avail. Thus, in June 2020 although met with several challenges and being unemployed I decided that I would be the best person to get my skin where I wanted it to be!”

Who opens a storefront business during a global pandemic? Twenty-nine-year-old Tiffany Jacobs -Eugene of Nene Candy Frozen Treats did as she opened her ice-cream doors in August 2020, landing her the highly regarded YEP Youth award of COVID-19 Entrepreneur of the year.