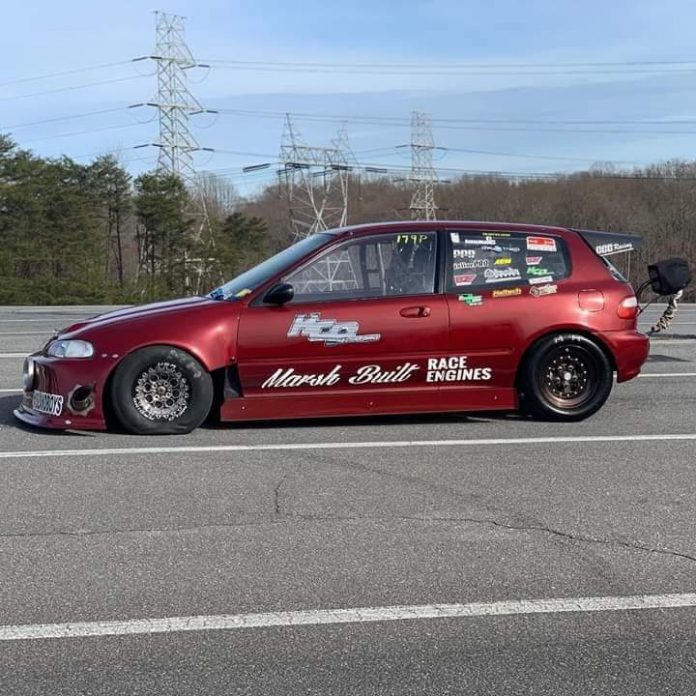 Jason Marsh hails from the village of English Harbour the son of Zona and Doc Marsh, now resides in Maryland USA.  He has been participating in the Haltec World Cup Finals in 2007 and for the 1st time will race not just flying the Antiguan Flag but representing the Island also.
Jason decided to register this year representing Antigua, as he says over the years a lot of Antiguans has traveled to support and assist him and as the Drag Racing scene is now growing at home he thought it would be fitting to give his home country and the sport of Drag Racing a boost.
Marsh races in the True Streets class and although he has never won he has made it to the finals 2 years consecutively placing 2nd. He holds the record for the 1st EF Honda Civic to run 8.35 seconds through the 1/4 on a 67mm turbo and has reset his record in his Honda EG Civic with 8.30 and holds the record for the fastest miles per hour (mph) in a Honda on a 67mm turbo.
Jason is not just a race car driver but also a performance engine builder, MarshBuilt Race Engines, and has a total of 8 cars built by him participating in the world cup this year.
His Team comprises of Demar Marsh his son and Joel Giscombe both from Antigua, Mosley, Luis, Fire & Daily from the VI, Brandon from Tortola, Cade from Jamaica and Jason Hunte from the USA.
His sponsors are: Darton Sleeves, Paradise Racing, PPR Guys in Turkey, Jason HunT Tuning, 100% Performance in Florida, In Line Pro, BZE Cylinder Head, Ar Fabrication/Howard, Hubcity Performance  MarshBuilt Race Engines  & The Island Boys.  He says “we island boys help each other so we are the main sponsors an we buy parts from each other”.
Jason wishes to say a special thank you to some Antiguans that travel each year to the WCF (World Cup Finals)  not only to support him but also assist the Team with maintenance between the races and major repairs if any car breaks, Luewico Brown, Cliff Richards, Walty, Kava and his sister Melissa Marsh who has never missed a year.
Haltec World Cup Finals a Miller Brothers Production will take place at Maryland International Raceway, Maryland, USA from October 30 to November 3rd.  Last year the event say 42,000 spectators at the venue and over 2 million viewers on the ouve stream.