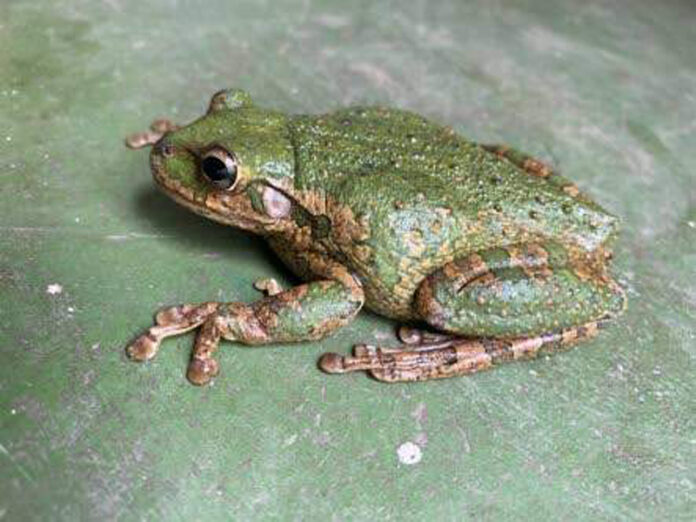 A teacher at Rest Primary and Infant School in Milk River, Clarendon, had to seek medical attention after she was poisoned by a Cuban tree frog earlier this year.

“I was at work, and I went outside to assist a child who spotted a frog under his table while having his lunch. I thought it was a toy, since the children are allowed to take toys to school,” Keran Burnell said.

She said that while removing the frog with her bare hands, she realised that it was real.

“It was wet and slimy, so I threw it out the window and quickly went to the pipe and washed my hands with plain water,” she explained.

However, three days later, Burnell noticed that her toes and fingers became numb, and her tongue was heavy.

“I decided to go to the doctor to get a check-up to see what was going on. After examining me, the doctor asked which animal did I interact with. I said no animal out of the norm; I have my dog, cat, cow, and bird, but then I remembered I had touched the frog!” exclaimed Burnell.

After she described the frog, the doctor confirmed that Burnell had been poisoned and needed immediate medical attention.

“I was given an injection, and he also prescribed medication for me. After the first dose things started to return to normal,” stated Burnell.

Her encounter with the amphibian came approximately nine months after local scientist Damion Whyte appealed to Jamaicans to report sightings of the invasive species of frogs (Osteopilus septentrionalis) after receiving photos and reports of them in St Catherine and Clarendon.

Last November, Whyte, a terrestrial biologist, had told the Jamaica Observer that the first official sighting of the frog was made by a colleague scientist in 2017. “He spotted a green frog on a fish farm in Clarendon,” Whyte, had said.

“Specimens have also been identified in Denbigh, and we have continued to track the spread of these frogs throughout the two parishes. With the help of social media, persons have also shared pictures of their encounters,” added Whyte, who is known for his environmental science work and who posts regularly on Twitter as @Roosters_world, and on Instagram using the handle @Roosters_world1.

On Friday night, Whyte told the Sunday Observer that he and his colleagues have received more than 100 reports of sightings of the frog. The majority, he said, were from Clarendon. Other sightings have been reported in St Catherine, Manchester, St Elizabeth, and St James.

Burnell said since her encounter with the frog at school, she had seen one in her garden at home “eating a big toad”.

She also said that the frogs could be seen in the early mornings hanging from the roof with one leg swinging, or on the window, desks, and even behind the computers at the school.

“The children are terrified of them, and after my encounter we do not want the children to be around them,” she stated.

In Jamaica, there are over 29 species of frogs that are both native and endemic to the island. A number of these frogs are currently threatened primarily as a result of habitat loss.

“The introduction of an invasive species, such as the Cuban tree frog, could therefore negatively impact on our species if it can spread through the country,” Whyte stated in November.

He also pointed out that the Cuban tree frog can have an impact on humans as the mucous it secretes from its skin as a defensive mechanism can irritate people’s skin, eyes, and nose. There have also been reports of these secretions triggering asthma attacks.

The frogs can also be a public nuisance, messing up walls and blocking drains. In Florida, for instance, they have been known to cause costly power outages by short-circuiting utility switches.

While it is native to Cuba, the Cayman Islands, and The Bahamas, the Cuban tree frog can also be found in Hawaii.

The frog ranges in size between 1.5 and three inches. The females are generally twice the size of the males. Their body colour varies from white, grey, brown, and green, with some dark blotches on the skin. As with most tree frogs, they have enlarged sticky toe pads for climbing.

They generally reproduce between March and October, and it has been reported by Dr Steve Johnson from the University of Florida that a female can lay up to 1,000 eggs, which are then fertilised externally by the male.

The Cuban tree frogs can be easily identified by their loud hoarse calls, “mraaaak”, at nights. you can also occasionally hear them in the day, especially after a period of heavy rainfall, which is common with most frogs.

Whyte said he and his colleagues are still not sure how the Cuban tree frog arrived in Jamaica. However, in Florida, it is alleged that the amphibians got there as hitchhikers on cargo ships.

He again appealed to Jamaicans “to take pictures and share information of sightings which can help track their spread”.

“Send them to me at my Twitter or Instagram accounts,” Whyte said, adding that he and his colleagues will continue to use information from other countries where the frogs are a major problem “to guide our monitoring”.