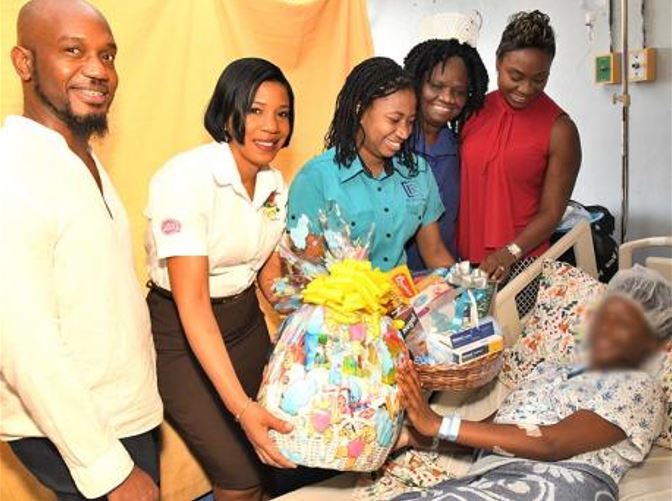 A 14-year-old who was the first to give birth on Christmas Day at the Victoria Jubilee Hospital Sunday has resolved to repay the faith and support of her parents as she charts an uncertain future.

The young mother, who was showered with gifts after she bore twins Keovanni and Reovanni shortly before 2 o’clock Christmas morning, said her premature sons had been due to be born in March 2023.

In a Gleaner interview, the teenager admitted that her pregnancy was unexpected and, initially, unwelcome. The minor, whose name this newspaper will not publish, said she was frightened and almost lost her mind but was determined not to have an abortion.

The girl credited her family’s support, especially from her mother, for keeping her grounded during pregnancy.

“From mi mother find out say mi pregnant, she always be ’round mi. She nuh rough mi and she nuh do weh she nuh fi do. She always deh round mi and she stay by my side,” she said.

Acknowledging that her pregnancy was also a source of disappointment for her parents, the teenager – the youngest of three siblings – said that she will now focus on becoming the best mother possible. She has also pledged to work to regain the trust of her parents.

“Mi disappoint her (mother) and Daddy, but I’m going to make up back everything and I promise her that,” she said.  “Mi a go back a school and do what mi need fi do and make Mommy proud and Daddy proud of me.”

The birth of Keovanni and Reovanni to a teenage mom comes weeks after vigorous public and parliamentary debate over Jamaica’s age of consent, which stands at 16.

There has been years-long discussion about the apparent incompatibility between the age of consent, which was increased from 14 in the 1980s, and the right to make decisions in adulthood, at age 18.

Senator Damion Crawford recently called for the age of consent to be raised to 18 and for prosecution to be waived if the accused in consensual sexual relations is within a few years of the minor’s age.

The 14-year-old mom at Victoria Jubilee said that the father of her twins is a schoolboy.

The Kingston resident, who appeared bashful when State Minister of Health Juliet Cuthbert-Flynn and hospital personnel approached her bedside bearing gifts, said she dreams of becoming a doctor one day. She also hopes that her sons will pursue academic goals.

“Mi want dem turn pilot, doctor, anything. Mi don’t want them fi inna no badmanism, not do no crime, just stay in school and do them best,” the 14-year-old said.

Cuthbert-Flynn said she was not made aware of Campbell’s age until it was pointed out by The Gleaner, but noted that support was available through the Ministry of Health’s teen clinic.

However, chief executive officer of the Child Protection and Family Services Agency (CPFSA), Rosalee Gage-Grey, said a bigger concern was the fact that at 14, the young mom was under the age of consent.

While “not taking away from the joy of giving birth”, Gage-Grey said the hospital has a responsibility to report cases like these to the Centre for the Investigation of Sexual Offences and Child Abuse.

It is unclear whether that information was relayed by the hospital to those state agencies.

However, the CPFSA’s chief executive contends that support for the young mother is also crucial in the process.

“It’s very important for parents to support their children, especially for a young girl like that,” said Gage-Grey. “If she is in need of additional support, the social work unit at the hospital would contact us.”