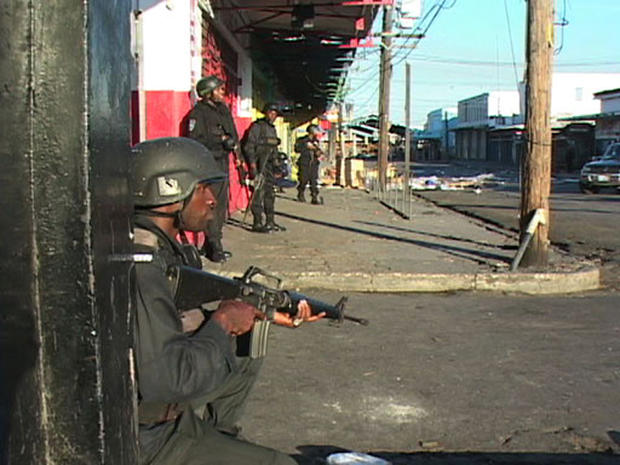 The main opposition People’s National Party (PNP) says it in support of the government’s decision to implement a State of Emergency in the western parish of St. James.

In a release on Thursday, the party’s spokesman on National Security, Fitz Jackson said the parish –  home to the tourist capital of Montego Bay, had “reached a near state of anarchy which could not be allowed to persist”.

He said Jamaicans have been  calling for a response from Government throughout last year, when 1617 Jamaicans were murdered and already more than 63 persons have been killed since the start of this year.

“The main victims of this wave of unchecked criminality are the ordinary citizens of St James who have been abused and murdered in this atmosphere of wanton violence,” said PNP president and opposition elader, Dr. Peter Phillips.

The oppositon party says it lends qualified support to this effort and will await the regulations governing the operations of the State of Emergency which are required to be placed before the Parliament.

“The Party is insisting that a robust, accessible and viable mechanism to protect the rights of law-abiding citizens during the operations must be in place.”

“Every effort must be made by the security forces to be vigilant, courageous, and determined in confronting the criminal threat, even as they are protective of the rights and interests of the law abiding citizens of the parish.”

On Thursday, during a press conference, Prime Minister Andrew Holness declared a State of Public Emergency for St James.

“The proclamation has been gazetted and a state of public emergency is now in effect for the parish of St. James” said Holness who added that under the state of emergency,  the security forces will have extraordinary powers.

“This does not mean that the use of these extraordinary powers are arbitrary or beyond review.This does not mean the suspension of the rule of law. The security forces are expected and have been directed to treat citizens with respect and protect the dignity and safety of all.

“We will be relentless as we pursue to criminals. We therefore seek the patience and understanding of all the citizens. As you travel, you will encounter roadblocks. Although there will be instances where some activities will be curtailed, as much as possible we do not intend to stop the good citizens from doing what they would normally do in the scope of things For his part, Police Commissioner George Quallo said the parish has presented a major challenge to police operations.

“There are numerous gangs operating in St. James. They are involved in murders, shootings, scammings, extortions and other illicit activities. They use murder as a tool to further their criminal interest, they create an atmosphere of insecurity throughout St. James and surrounding areas.”

The Commissioner said the key operational objectives of the security forces is to disrupt the activities of these gangs.

“One of primary activities is also the protection of the rights of citizens. We will be going after wanted men, seizing weapons and taking place our communities. We want to ensure the public that the security forces are there for your protection.

Quallo also noted that a hotline has been established for citizens to register their concerns and get information about activities of the security forces .

He added that last year there were 335 murders in St. James, almost twice the number committed in  the central parish of Clarendon, that had the second highest number of killings.

A State of Emergency related to crime and violence was last imposed in a section of Jamaica eight years ago during the operation to capture the fugitive Christopher ‘Dudus’ Coke.