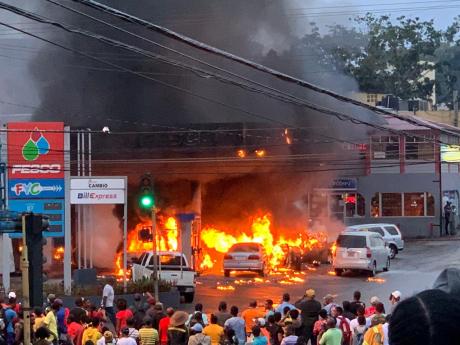 Four persons have been hospitalised with third degree burns and three others are now nursing minor injuries following a major fire at the FESCO service station located at the intersection of Perth, Manchester and Caledonia roads in Mandeville.

Approximately 5:40 pm Friday (February 21) the service station was engulfed in flames, emitting a heavy blanket of smoke across sections of the town and causing chaos among customers, commuters and passersby.

A video circulating on social media shows litres of gasoline gushing from a service pump just seconds before a fiery explosion.

It appears that sometime after, a car was being jump-started which may have caused sparks which ignited the blaze.

According to the police approximately twelve motor vehicles have been damaged.

“The fire was brought under control by three units from the Manchester Fire department… Myself and 20 other officers are actually managing this situation,” said Superintendent Gary Francis.