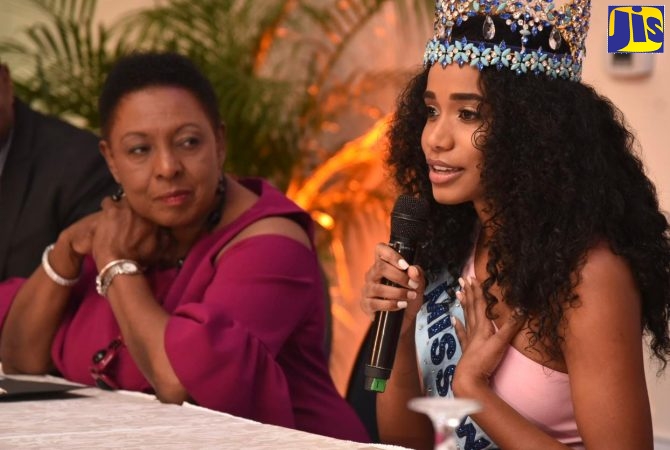 Miss World 2019, Toni-Ann Singh, says that winning the prestigious global title has given her a platform to advocate for change while participating in projects that will assist the less fortunate in the society, particularly women and girls.

She was responding to questions from journalists during a press conference at the Jamaica Pegasus Hotel in New Kingston on Saturday (Dec. 21).

Miss Singh, who grew up in Bath, St. Thomas, was crowned Miss World on December 14 in London, becoming the fourth Jamaican to take the 69-year old competition.

She said the pageant allows women to showcase and highlight their capabilities “which aren’t solely based on outward appearances or beauty.”

“It is so far past being about the standards of beauty and so much more about women being granted the opportunity to be heard,” she said.

“Yes there is a crown…but most of the time you’ll find us with the hair pulled back, with no makeup on and we are on the ground working because that is the importance of the Miss World platform,” she pointed out.

Ms. Singh said she has been inspired to work with teenage mothers and is hopeful that she will be able to make a positive difference in their lives.

“I am grateful for that but I realise that there are so many awesome women in Bath and all over Jamaica and the world that have the same capabilities that I have, but they don’t have the opportunities and they might not have the parents that I have …so here I am now trying to make sure that I can be the difference for these women,” she said.

Meanwhile, Miss Singh said that her rendition of Whitney Houston’s popular song ‘I Have Nothing,’ which won her the talent aspect of the Miss World competition, has been recorded and released on YouTube as a charity single.

She noted that all proceeds from the recording will support the Miss World ‘Beauty with a Purpose’ programme.  Donations can also be made on the Miss World official pages.

“Every penny that is made from this recording, everything that is donated even the smallest amount makes such as difference,” Miss Singh said.

Minister of Culture, Gender, Entertainment and Sport, Hon. Olivia Grange, in her brief remarks, said that Jamaica is delighted that Miss Singh copped the Miss World crown and has returned home.

“We are very happy that Miss Jamaica World is now Miss World…I want to thank (Head of the Miss World Organization) Julia Morley for agreeing to have her come to Jamaica just before Christmas…We are happy that we are able to celebrate her as Miss World,” she said.

Ms. Grange noted that Miss Singh will be presented with the Key to the City of Kingston later in the day by Mayor of Kingston, Senator Councillor, Delroy Williams, at a cultural tribute at Emancipation Park.

The press conference formed part of activities to mark the four-day homecoming celebration for Miss  Singh organised by the Government of Jamaica.

She is expected to perform at the cultural event at Emancipation Park before travelling to her home parish later in the evening where she will make an appearance at the ‘Unruly Fest’ concert.

During the event, Mayor of Morant Bay, Councillor, Michael Hue, will present her with a citation on behalf of the people of St. Thomas.

Activities scheduled for Sunday, December 22 include a tour of sections of the parish.

During that tour, she will place a wreath at the tomb of her grandfather and former Councillor, Harold Singh, and visit the Women’s Centre of Jamaica Foundation’s (WCJF) office in the parish.

She will also be hosted at a luncheon by Mayor Hue.

On her return to Kingston on Sunday, Miss Singh will be hosted by Prime Minister, the Most Hon. Andrew Holness, at a reception at Jamaica House.

On Monday, December 23, Ms. Singh will pay courtesy calls on Governor-General, His Excellency the Most Hon. Sir Patrick Allen; Prime Minister Holness; and the Leader of the Opposition, Dr. Peter Phillips.

She will also visit the WCJF’s head office in Kingston where she will interact with young mothers and staff at the institution. Miss Singh departs the island later in the evening.