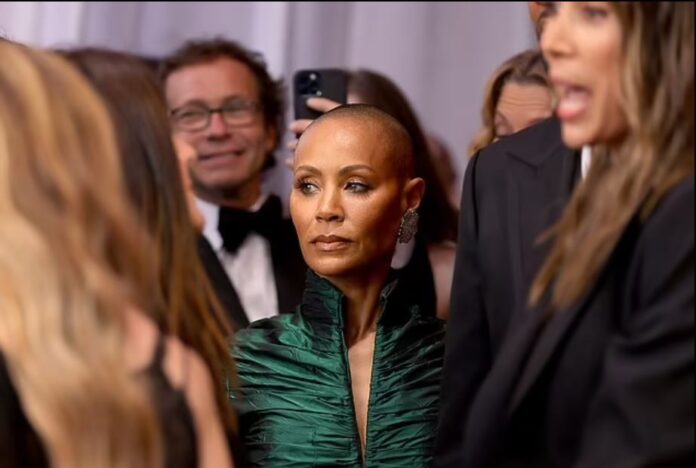 Bill Maher dived into the Oscars controversy in his show on Friday, saying that Jada Pinkett Smith should ‘thank God’ that alopecia is her biggest medical concern.

‘If you are so lucky in life as to have that be your medical problem, just say ‘thank God,” the HBO Real Time host joked to his panelists, attorney Laura Coates and former presidential and New York City mayoral candidate Andrew Yang.

‘Aging is, trust me I know, it’s the degradation of the flesh. It happens to all of us,’ said Maher, 66.

Pinkett Smith suffers from alopecia areata, a hair-loss autoimmune disorder which is distinct from androgenic alopecia, the pattern baldness that often accompanies aging in many men, and some women.

After Oscars presenter Chris Rock cracked a joke about Pinkett Smith’s shaved head at Sunday’s ceremony, saying that she could star in ‘GI Jane 2’, her husband Will Smith stormed the stage and slapped the comedian.

But Maher argued that Smith’s sensitivity over his wife’s hair loss was misplaced.

‘You know, just put on a f***ing wig like everybody else at the Oscars if it bothers you so much,’ the commentator joked.

During the panel discussion, Coates said she couldn’t believe Smith received a standing ovation when he won the Best Actor award just minutes after the infamous slap.

‘I thought, ‘Why is he even there to get the award?’ said Coates, a CNN legal analyst and former federal prosecutor.

Yang responded: ‘Part of it was he’s Will Smith. Anyone else would have been ushered out.’

‘They’re always talking about micro-aggressions,’ Maher said of the celebrities who applauded Smith.

But ‘suddenly, they were OK with this,’ he added, saying that it was a moment that ‘showed broken morals.’

Maher wasted no time jumping into the controversy in his show, addressing the slap heard ’round the world in his opening monologue on Friday.

‘Thank you all for coming and putting on a brave face,’ Maher said, adding that everyone was still ‘processing’ the events of the Oscars. ‘To Will Smith: stay strong and I got your back.’

‘Look, I’m not here to humiliate Will Smith. He gets enough of that at home,’ Maher added.

‘Every single person in America was talking about the sucker punch heard ’round the world so that whole ‘Keep my wife’s name out of your mouth’ didn’t really work out.’

‘And the Oscars, wow — There was more action in three seconds than in three hours of The Power of the Dog,’ Maher cracked, referring to the lengthy Benedict Cumberbatch Western.

‘Who would have thought the movie coming out of the Oscars with all the buzz was GI Jane,’ the host continued.

On Friday night, Smith in a shock announcement resigned from the Academy of Motion Picture Arts & Sciences in the wake of his on-stage assault of Rock.

Smith, in a statement first obtained by Variety, called his actions during the Oscars ceremony ‘shocking, painful and inexcusable,’ adding that he would accept any additional consequences issued by the Academy’s Board of Governors.

‘The list of those I have hurt is long and includes Chris, his family, many of my dear friends and loved ones, all those in attendance, and global audiences at home,’ Smith said. ‘I betrayed the trust of the Academy. I deprived other nominees and winners of their opportunity to celebrate and be celebrated for their extraordinary work. I am heartbroken.’

The actor also acknowledged that slapping Rock during the ceremony caused other award winners to be overshadowed.

‘I want to put the focus back on those who deserve attention for their achievements and allow the Academy to get back to the incredible work it does to support creativity and artistry in film,’ Smith, 53, said.

He also shared how ‘change takes time’ and he is now ‘committed to doing the work to ensure that I never again allow violence to overtake reason.’

The Academy said it has accepted Smith’s ‘immediate resignation’ and will ‘continue to move forward’ with its disciplinary proceedings against him for violations of the group’s standards of conduct.

Smith’s shocking move comes just one day after sources close to the actor confirmed to The Sun that he and his lawyers had planned to write to the Academy to plead his case ahead of his upcoming hearing on April 18.

‘Things are hanging in the balance. He will write an official letter to apologize, and effectively beg for their forgiveness,’ the source revealed Thursday.

‘He is also expected to hold a call with show bosses in the next 24 hours. April 18 is D-Day, though — he will find out if he still has an Oscar, and quite possibly, a career.’

Sources familiar with the situation also claim the fate of his upcoming projects, including the Apple-funded slave escape drama Emancipation, remains in question.

‘Production executives and studio chiefs do not want to be seen picking a side too early,’ the insider said, noting that Smith was expected to return for a fourth installment of the Bad Boys franchise although no start date has been set yet.

News of the actor’s resignation also followed a Good Morning America interview with Oscars producer Will Packer that aired Friday morning and detailed the Academy’s immediate response to the attack.

After the actor onto the Oscars stage on Sunday and hit Rock, Academy officials asked Smith to leave the ceremony, Packer said. The producer claimed they were considering physically removing Smith, an option that he successfully lobbied against.

Packer said that his co-producer Shayla Cowan informed him that Academy officials ‘were about to physically remove Will Smith.’

‘I had not been a part of those conversations, and so I immediately went to the Academy leadership that was on site and I said, “Chris Rock does not want that. Rock has made it clear that he does not want to make a bad situation worse”,’ said Packer.

‘I was advocating what Rock wanted in that time, which was not to physically remove Will Smith at that time. Because as it has now been explained to me, that was the only option,’ he said. ‘There was a conversation, that I was not a part of, to ask him to voluntarily leave.’

However, a source close to Rock told TMZ denied that the comedian was ever asked about removing Smith from the theater.

‘Chris told Packer ‘I’m not pressing charges. All I want to do is leave.’ He was never asked if he wanted Will removed. This is the Academy covering itself.’