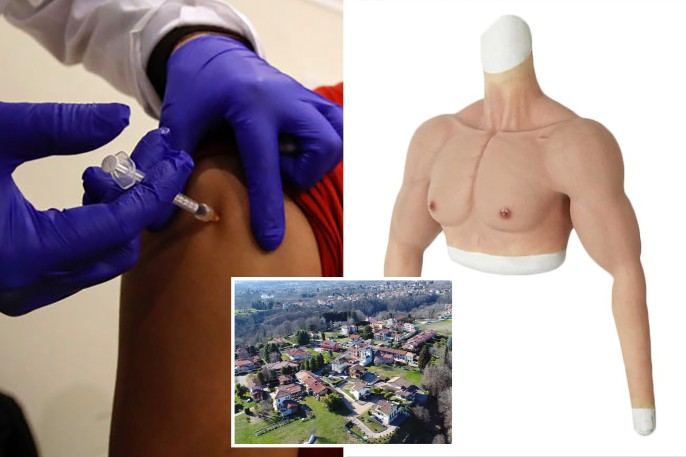 An Italian man thought he had an ace up his sleeve to circumvent his country’s COVID-19 vaccine mandates — but was busted when he showed up for his shot wearing a fake arm, according to a report.

The creative anti-vaxxer may have paid hundreds of euros for the silicone prosthetic, which he wore to the vaccine center in Biella, a town in the northern Piemonte region near Turin, the Guardian reported.

The 50-year-old — who sought to avoid the jab but still get the so-called Green Pass — signed a consent form and lifted up his sleeve for the health care worker, who didn’t notice anything amiss at first.

But when the woman touched the faux limb, she realized something was odd, told the man to remove his shirt and discovered the trickster’s strong-arm tactic.

The worker, Filippa Bua, 60, told the Italian newspaper La Repubblica that she “felt offended as a professional,” adding that “the color of the arm made me suspicious … It was well-made, but it wasn’t the same color.”

She told La Stampa she could not see any veins, the Guardian reported.

“At first I thought I made a mistake — that it was a patient with an artificial arm,” she said.

The shameless man still tried to persuade her to turn a blind eye to his ruse while injecting some levity by asking, “Would you have imagined that I’d have such a physique?”

The 50-year-old signed a consent form and lifted up his sleeve for the health care worker, who didn’t notice anything amiss at first.

Piemonte president Alberto Cirio said in a joint statement with regional health chief Luigi Icardi, “The promptness and skill of the health worker ruined the plans of this person, who will now have to respond to the judiciary.”

La Repubblica suggested that the same man may have shared a message on Twitter featuring a silicone body suit on sale on Amazon, along with the message, “If I go with this, will they notice?

“Maybe beneath the silicone I’ll even put on some extra clothes to avoid the needle reaching my real arm,” the user reportedly added.

The “super green pass,” which takes effect across the country Monday, requires proof of vaccination or recovery from the bug.

The busted man’s attempt would “border on the ridiculous” were it not “for the fact that we are talking about a gesture of enormous gravity,” Cirio and Icardi said in their statement.

“It is unacceptable in the face of the sacrifice that the pandemic is making the whole community pay for,” they added, according to the Guardian.