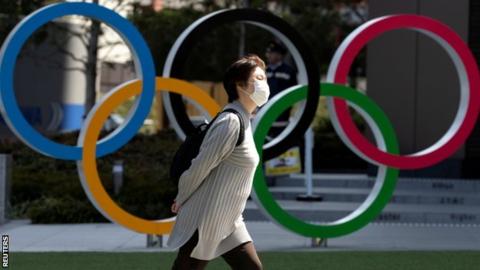 “On the basis of the information the IOC has, postponement has been decided,” Pound said in a phone interview. “The parameters going forward have not been determined, but the Games are not going to start on July 24, that much I know.”

Pound, a Canadian who has been one of the most influential members of the IOC for decades, said the Games will likely be moved to 2021, with the details to be worked out in the next four weeks. He said he expects the IOC to announce its next steps soon.

“It will come in stages,” said Pound, 78, the longest-serving IOC member. “We will postpone this and begin to deal with all the ramifications of moving this, which are immense.”

Neither the IOC nor the Tokyo 2020 organizing committee had announced a decision to postpone as of Monday afternoon.

When informed of Pound’s comments and asked for an IOC response, spokesman Mark Adams said, “It is the right of every IOC member to interpret the decision of the IOC executive board which was announced (Sunday).”

In that announcement Sunday, IOC president Thomas Bach indicated, for the first time, that postponing the Tokyo Games would be a possibility.

In a letter to the athlete community, he wrote that the IOC would begin exploring alternate ways to stage the Games, including postponement, and plan to reach a decision within the next four weeks. He emphasized that the IOC has ruled out canceling the Games, a stance that was reiterated by key Japanese officials – including Prime Minister Shinzo Abe – on Monday.

Representatives of the Tokyo 2020 organizing committee did not immediately reply to an email from USA TODAY Sports seeking a response to Pound’s comments.

The Olympics would be the latest – and, by far, most significant – sporting event to date to fall victim to the coronavirus, which was first identified in Wuhan, China, in December. Also known as COVID-19, the disease rapidly spread throughout China and across the world in subsequent months, infecting hundreds of thousands of people and causing major disruptions to daily life in numerous countries.

The spread of the coronavirus also has interrupted Olympic qualification procedures and severely affected training regimens, prompting athletes and sports governing bodies around the world to call for the Games’ postponement.

“I would have real moral objections, if the situation was the same as it was today, to competing,” swimmer and five-time Olympic gold medalist Nathan Adrian told USA TODAY Sports on Friday.

Pressure mounted over the weekend as World Athletics, the international federation that oversees track and field, publicly called for the Games to be postponed. The Canadian Olympic and Paralympic Committees then took matters to another level Sunday night by announcing they will not send a delegation of athletes to the Tokyo Games unless they were postponed.

Within the next 12 hours, Australia’s Olympic Committee released a similar but more ambiguous statement, explaining that its executive board had agreed that “an Australian team could not be assembled in the changing circumstances at home and abroad.” And the German Olympic Committee joined its counterparts in Brazil and Norway, among other countries, in publicly urging the IOC to postpone the Games.

The decision to postpone, when finalized and announced by the IOC, will mark a significant milestone. It would the first time the Olympics have been suspended, though the Games have been canceled in times of war.

“I’ve had so many calls with athletes who have been in tears trying to train for their ultimate dream but not wanting to jeopardize their health,” American hurdler Lolo Jones wrote on Twitter after Pound’s comments. “This was the right thing to do. May the world heal.”