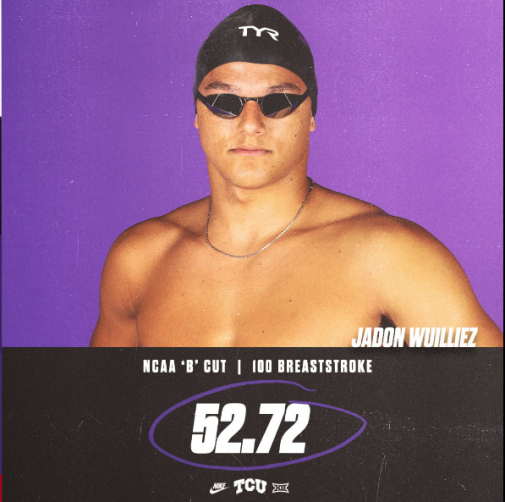 The year 2021 has seen Antigua and Barbuda’s Jadon Wuilliez introduce himself on the collegiate level with some of the best times seen in the CARIFTA region in the short course yards pool. In the United States he has become the fifth fastest Caribbean swimmer ever in the 100 yard breaststroke midway his first season with a time of 52.72.

What we saw in college from the Texas Christian University freshman was just a glimpse of what he would do on the international stage.

Today at the Etihad Arena, Abu Dhabi, United Arab Emirates he crowned himself the fastest CARIFTA region swimmer in the 100 metre breaststroke of all time at the World Short Course Swimming Championships.

He came to the Middle East with a personal best of 1:00.67 from June 26 this year while competing for Plymouth Leander. That mark would be crushed . Swimming from heat 2 the man from St John’s covered the field in the first 50 metres . He blazed to a split of 27.65. That time also bettered his 50 metre national record 27.74. He brought it home in 31.08 to touch in a new national record of 58.73. That was the fastest time ever done by a CARIFTA region, Caribbean or CCCAN swimmer. It is also the first time a swimmer from the CARIFTA region had broken the 59 seconds barrier.

The previous unofficial CARIFTA region record had been set almost a decade ago .The record holder was Abraham McLeod of Trinidad and Tobago who had stopped the clock in 59.35 at the 2012 edition in Istanbul Turkey.

It was Jadon’s better speed endurance in the last 50 metres that helped him get through that 59 seconds barrier first.

The previous unofficial CCCAN record was set by Mexican Alejandro Jacobo . Alejandro is a graduate of Texas A&M , the same school as the women’s CCCAN, Caribbean , CARIFTA Region and world record holder Jamaican Alia Atkinson. Jacobo set the time of 58.83 at his country’s National Short Course Championships in 2008.

Jadon held on to all three accolades and had the fastest time at the global showpiece until heat 4. The 19 year old lost the CCCAN and Caribbean titles to the Dominican Republic’s Josue Dominquez .the 25 year old Brigham Young University student won in 58.44.

It has been quite the start for Jadon on this stage placing 24th. He now completely dominates his national sprint breast record books.