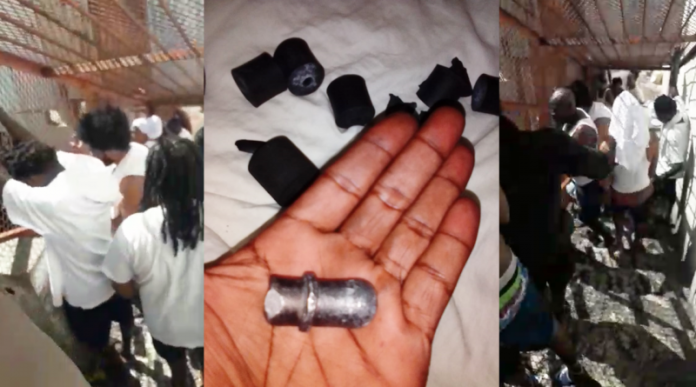 Inmates at His Majesty’s Prison were able to access the keys to their cell block and let themselves out to enjoy some fresh air, today, after reportedly being on lockdown over the weekend.

However, in the ensuing near-riot, one prisoner reportedly was shot – but not taken to the hospital for treatment.

It is alleged that the man – identified as Junior Emmanuel, a.k.a. “Steel” – was walking away from a police officer on the scene when he was shot and, subsequently, taken away to another wing of the facility.

REAL News was unable to ascertain the seriousness of Emmanuel’s injury and whether he was eventually taken to the medical centre.

Apparently, the weekend lockdown was meant to penalize inmates – following an incident, last week, in which a prisoner got hold of a cell phone and telephoned Progressive FM, complaining about the conditions they are facing.

These included the lack of drinking water and their hunger, since, the inmate alleged, the prisoners are not being fed properly.

On behalf of his fellow prisoners – who could be heard encouraging the caller – the inmate threatened that there would be protest and riot action if the situation was not addressed.

In a second instance, a prisoner again managed to call a radio station and confirmed the lockdown.

He alleged that inmates had been in their cells for days without food or water and had not been able to empty the buckets of human excrement sitting in the cells.

Since getting hold of the keys, however, the prisoners reportedly were able to empty the buckets and explain that their actions were not meant to harm anyone – only to draw attention to their plight.

Meanwhile, the keys to the entrance and exit gate remained in the hands of prison officers.

The inmate says the authorities seem to be punishing them for complaining about the conditions they face and saying the food served in the prison is not fit for human consumption.

He says the institution is in urgent need of attention, since those behind its walls are being treated like animals.

According to the inmate, they are also being deprived of their snacks; and, in his opinion, the officers appear to go to bed with thoughts of how they can frustrate the prisoners.

Having made their grievances known publicly, some 167 inmates reportedly have signed a petition, seeking better living conditions at the penal facility.