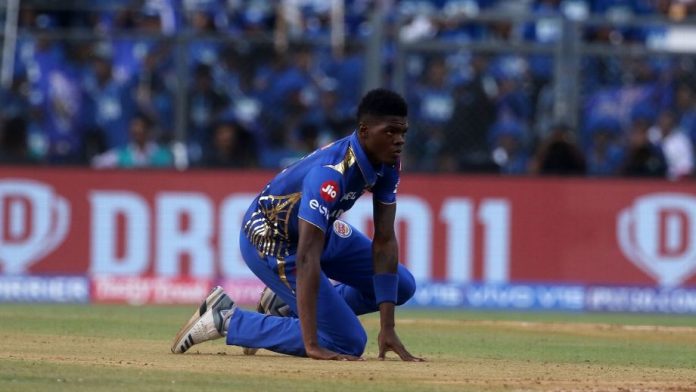 Alzarri Joseph is unlikely to be seen in action for Mumbai Indians for the foreseeable future after picking up an injury during Saturday’s game against Rajasthan Royals. ESPNcricinfo understands that Joseph has a tear in his right arm, which he dislocated while diving on the field, and will miss the remainder of the tournament.

Joseph came into the IPL as a replacement for New Zealand’s Adam Milne, who didn’t arrive in India at all because of a swollen heel. Milne had been bought at the December auction for INR 75 lakh ($104,000 approx), and Joseph was brought in for the same amount in accordance with IPL rules.

This has been a difficult year for Joseph already. In February, he lost his mother in the middle of his maiden home Test in Antigua, where he’d dismissed Joe Denly off the first delivery. He opted to play the Test, displaying a lot of character in West Indies’ series win against England.

Joseph’s IPL sojourn lasted a week. He announced himself spectacularly by picking up 6 for 12 – the best-ever figures in the IPL – to deliver an away win against Sunrisers Hyderabad. Three days later, Joseph hit the winning runs against Kings XI Punjab in his first home game. However, he bowled just two overs in that game, in which he conceded 22 runs, going wicketless.

On Friday, before his fall, Joseph had already endured a hard beating, once again going wicketless and leaking 53 runs in three overs.

Mumbai play Royal Challengers Bangalore at home on Monday before travelling for four away games.