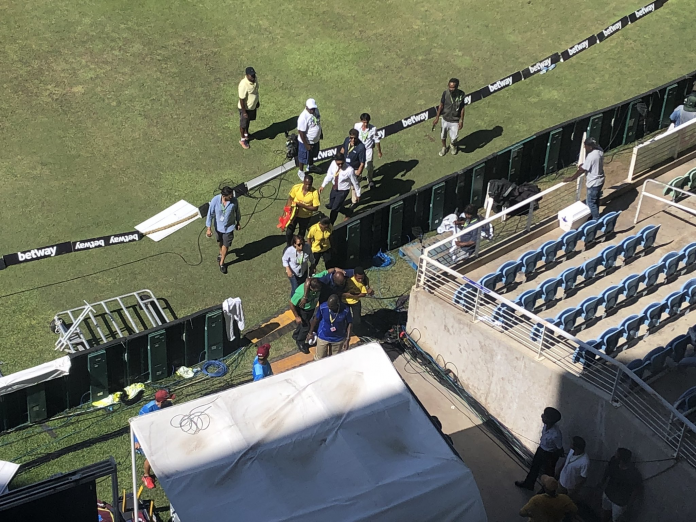 Sir Vivian Richards fell ill while he was on air doing a pre-game analysis on the eve of the second World Championship Test between India and West Indies on Friday.

Richards, who has been doing commentary along with pre and post-match analysis on official broadcasters Sony was doing a pre-match show when he complained of uneasiness.

While a stretcher was brought, Richards left the ground with the help of two volunteers as posted on Twitter. The details of his medical condition is still awaited.

It has been learnt that Richards suffered from dehydration due to excessive humid conditions. He was taken to the hospital for a precautionary check-up. He is currently getting medical attention in the West Indies dressing room.

West Indies Players’ Association also took on Twitter and wrote, “We wish Sir Viv Richards a speedy recovery, Sir Viv, who was doing the pre-game show, fell ill on air and has reportedly been taken to the hospital to get checked.”

Meanwhile, Rahkeem Cornwall, the 26-year-old all-rounder from Antigua weighing around 140 kilograms, became the heaviest Test cricketer ever when he was inducted in West Indies’ playing XI for the second Test against India. Rahkeem surpassed former Australia captain Warwick Armstrong, who weighed 133-139 kg, to achieve this feat.

West Indies skipper Jason Holder won the toss and opted to bowl against an unchanged India in the 2nd Test at Sabina Park. West Indies had two debutants in the form of Rahkeem Cornwall who replaced Miguel Cummins and Jahmar Hamilton who was drafted in the side at the place of Shai Hope.