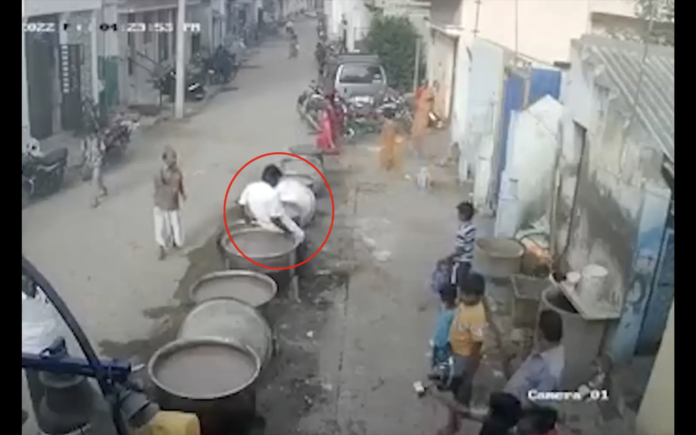 ny post: A man died last month from horrific burns he sustained after falling into a giant pot of porridge in India, as seen in a graphic video.

The victim, named Muthuswamy, had reportedly been in charge of overseeing the preparation of porridge for an upcoming festival.

However, things went south on July 29 after he suffered an unfortunate spill. In the clip of the incident, which took place in Tamil Nadu, the event organizer can be seen walking along a row of porridge vats when he suddenly staggers backward after seemingly losing his balance.

The unsteady soul then attempts to brace himself against one of the cauldrons, only to topple backward into the scalding stew with a splash.

Upon witnessing the freak accident, bystanders rush in to try and extricate Muthuswamy but to no avail. After what seems like an eternity in the pot, the poor fellow is finally retrieved by a team of Samaritans after which he was subsequently rushed to the Rajaji Government Hospital.

Unfortunately, his saviors came too late: Muthuswamy tragically perished from the severe burns he sustained in the stew.

The cause of the man’s sudden unsteadiness is not yet known, however, his wife said he suffered from epilepsy, which may have triggered the fall.

Police have since launched an investigation into the tragedy.

In a similar freak accident in 2016, a Russian confectionery plant worker was killed when she fell into a giant mixer filled with molten chocolate.