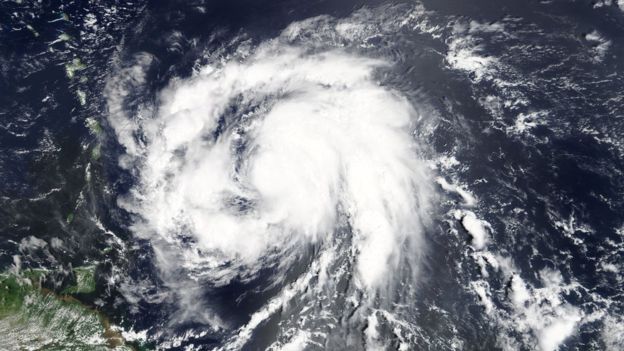 It is due to hit the Leeward Islands, with the eye passing directly over Dominica  in the coming hours.

Maria is moving roughly along the same path as Irma, the hurricane that devastated the region this month.

Hurricane warnings are also in place for:

Warnings are also in effect for St Kitts and Nevis, Montserrat and St Lucia while hurricane watches are in place for St Martin, Saba, St Eustatius and Anguilla.

Some of these islands are still recovering after being hit by Hurricane Irma – a category five hurricane which left at least 37 people dead and caused billions of dollars’ worth of damage.

The Leeward Islands, where Maria will first strike, include Antigua and Barbuda. The latter island was evacuated after being devastated by Irma.

The US National Hurricane Center (NHC) has warned that heavy rainfall caused by the hurricane “could cause life-threatening flash floods and mudslides”.