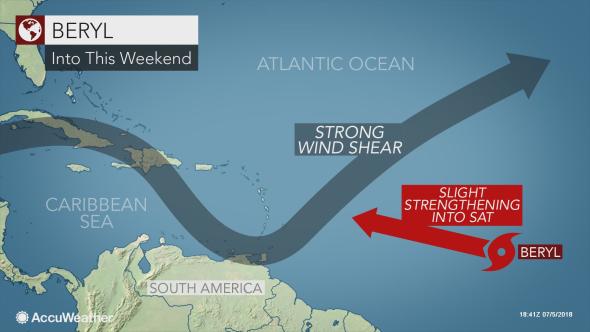 Beryl was upgraded from a tropical storm to a hurricane on Friday, according to the National Hurricane Center.
According to meteorologists, Beryl is in the south-central Atlantic drifting toward the northwest at 14 mph with maximum sustained winds of 75 mph, making it a Category 1 hurricane.

Beryl may affect the Leeward Islands by late this weekend, although it is currently forecast to weaken some by that time.

“It’s got a lot of open ocean to deal with for a while, but late in the weekend, it may start to affect the Lesser Antilles.”

“It’s not extremely well organized, though a really small eye has developed.”

Due to Beryl, there will be a chance of tropical storm force winds and heavy rains in the Lesser Antilles over the weekend.

“It does look like it will be weakening some by the late weekend, but we can’t guarantee it will dissipate by next week.”

Beryl is the first hurricane of the 2018 Atlantic season.