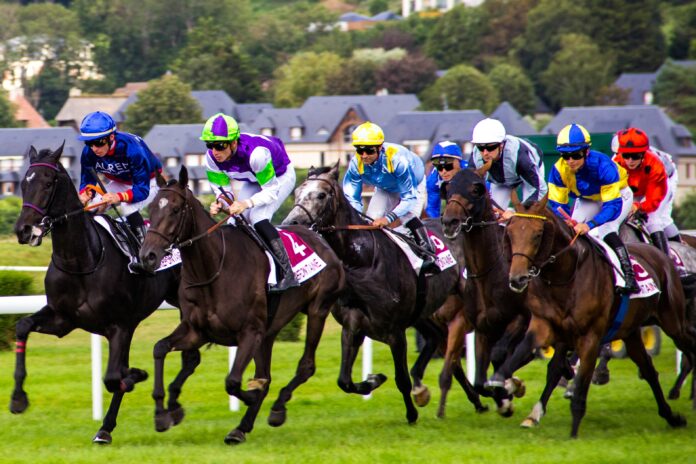 2022 saw the triumphant return of competitive horse racing to the island of Antigua. After almost three years without hooves on the track at Cassada Gardens, the Antigua Turf Club staged the Back to the Races meet in March of this year, comprised of five exciting races.

Antigua should be proud of its contribution to the global sport, but when it comes to the very best in horse racing you will need to look a little further afield. On the international calendar, nothing can top the United Kingdom for world-class racing.

The horse racing events that take place on the annual British calendar are either flat races or jumps races.

Flat races are contested “on the level” and don’t feature any jumps or obstacles to negotiate. This is the ultimate test of speed, stamina and skilful riding; although it seems like racing on the flat is easy, jockeys need exceptional precision to be able to restrain their horse or let them run.

The types of flat races you’ll come across in Britain are group/listed races, classics, handicaps and maidens.

Jumps racing, meanwhile, takes place on courses with obstacles that need to be jumped. Larger jumps are referred to as fences, while small ones are classed as hurdles. The official name for jumps racing is National Hunt racing, which pertains to its traditional origins.

Jumps races test stamina in horse and jockey as well as jumping ability. Some examples of National Hunt races are hurdles, handicaps and steeplechases.

Major Events on the British Calendar

While horse racing takes place across the UK throughout the year, there are several major meetings that will be of considerable interest to racing enthusiasts. At least three stand out on the calendar.

The Cheltenham Festival takes place every March at the notable race course. Easily the highlight of the National Hunt calendar, Cheltenham is known for delivering world-class jumps racing year after year. Taking place over four days, the meet features a whopping 28 races. The blue riband event is The Gold Cup, which takes place on the fourth and final day of the festival.

Is there a more famous race than the Grand National? Probably not! This race is known the world over and was even memorialised in film by the 1944 blockbuster National Velvet. While the race itself is globally popular, thanks in part to its challenging course featuring notorious fences like Beecher’s Brook and The Chair, few people other than diehard fans know that the Grand National takes place during a three-day festival.

The most stylish event of the flat racing season, Royal Ascot is so-named for a reason. This is the only racing event where you can guarantee there will be a royal presence. Her Majesty Queen Elizabeth II is a keen supporter of Royal Ascot. She even owns a former World Cup winner – Estimate, who snatched the trophy in 2013.

If you can’t be at British racing festivals in person, the next best way to experience these events is to follow the highlight races online. Most of the top festivals broadcast key races via streaming services like YouTube or digital TV channels.

If you are going to watch live, one of the easiest ways to keep track of race times is via specialist platforms such as Racing TV. The site posts up-to-the-minute timings for both today’s race cards and future events.

Anyone with even the slightest interest in horse racing dreams of picking the next Grand National or Gold Cup winner. While actually betting on British races may be slightly tricky depending on where in the nation you reside, you can still have plenty of fun researching horses and making predictions for who you think will snag a coveted trophy.

As with following races, the internet really is your best friend when it comes to researching and selecting the horses you think are in with the best chances of being first past the post.