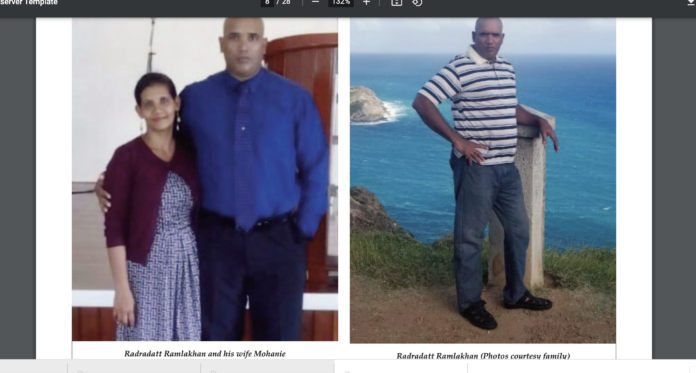 Leonard Ramlakhan described his father’s killing as a nightmare when he recounted Monday night’s tragic incident.

Forty-five-year-old Radradatt Ramlakhan was shot in his sleep after bullets penetrated his wooden house in Grays Farm.

Radradatt was apparently injured by stray bullets from this incident.

“Everyone was sleeping and I woke up hearing screams from my mother and she was screaming that “he got shot,” “he got shot,” Leonard told state media.

“So, when she ran in my room, I quickly closed the door ‘cause I thought the person was in my house. So, when I asked her what happened, she said he got shot and nobody in the house.”

He said he tried to take his father to the hospital but could not manage on his own.

“When he first got shot, I was trying to put him in my vehicle but there wasn’t anyone there to help me at that time because people just shoot the place so nobody coming out their house,” Leonard recounted.

The Emergency Medical Services later took Radradatt to Sir Lester Bird Medical Centre, where he was pronounced dead at 11:15.

“He’s the breadwinner of the family. He is a baker. He have his own business. We just finished working to go out on the road to sell and woke up to this. It’s a nightmare,” Leonard lamented.

Mussington also succumbed to his injuries.

The police are appealing to anyone who witnessed suspicious activities in the area, before or after the incident, to contact the Grays Farm Police Station at 462-0481 or the Criminal Investigations Department at 462-3913.

The police are also reminding the public of a $25,000 reward for information leading to the arrest of people involved in heinous crimes.