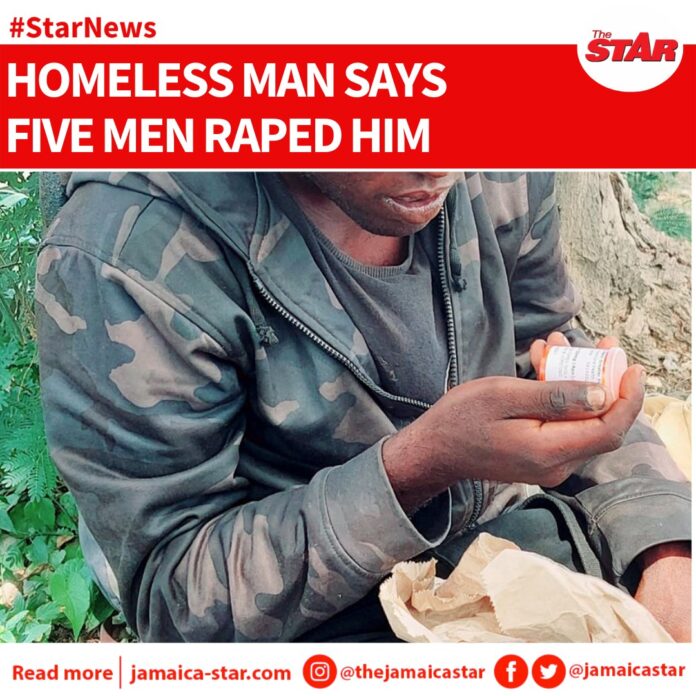 A homeless man said he is now fearing for his life after he was allegedly held at gunpoint and buggered by five men in St Catherine, last Friday.

The man, Paul*, said that he was sitting along the roadway when an unidentified man, travelling in a grey motor car, pulled up beside him. He said that he asked the man for a $1,000 to buy food. He said that the man asked about his well-being and shortly thereafter brandished a handgun and ordered him to enter the vehicle.

Paul said that the man took him to the dirt track in the parish where he and four other men repeatedly assaulted him at gunpoint.

He said that the ordeal lasted for about an hour.

“A last night a di fuss mi a get fi sleep a likkle bit, because since it happen mi can hardly sit down and defecate,” he told THE STAR on Monday.

Paul said that the experience has been his most difficult encounter in his life.

“Mi nuh deserve this! Me is a hard-working youth, nuh true me look so and deh pon di streets. I have been homeless since 18, when mi did affi leave the home. Mi do landscaping, painting, and any likkle thing fi help out the people inna di market. A nuff things mi guh through, but this is the worst thing mi ever experience,” he said.

Retired Woman Police Inspector Emily Howard, who has been supporting Paul, told THE STAR that he called her two days after the alleged incident and told her of his ordeal. She said that she immediately took him to the hospital, and also ensured that the matter was reported to the police.

“This is a heartless act. How can we continue to act like this towards each other in society?” Howard said.

The retired cop said she is hoping to get assistance from the public to help get Paul off the streets.

“This young man is a talented young man; helpful and very positive-minded, despite all he has been through. I will continue to do the best l can to help him, but l need help. I would love for anyone out there to help me to help him,” she said.

Retired Woman Police Inspector Emily Howard may be contacted via telephone at (876) 310-1097.