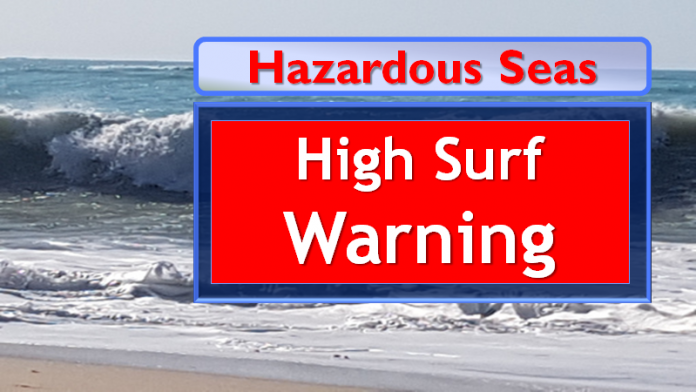 A high surf warning is in effect for Antigua, Barbuda, Anguilla and the British Virgin Islands. Swells are expected to peak Sunday.

Moderate, long period swells, being generated by a low-pressure area located over the northern North Atlantic, are reaching the area. The swells are expected to cause high surfs and powerful rip currents, which will be a severe threat to life and property in the surf zone.

There is also the increased likelihood of damage due to flooding of some low-lying coastal areas.

Swell period: 12 to 15 seconds. Swells: north at 2 to 3 metres (6 to 10 feet) and occasionally higher. Highest swells will take place across the northern waters of the British Virgin Islands.

Surfs (breaking swells): Over 3 metres (over 10 feet). These conditions will be very conducive for dangerous rip currents. Please note that surfs could be as much as twice the height of swells, depending on the bathymetry of the near shore areas.

Locations (to be) affected: Reefs and mainly exposed northern and eastern coastlines with relatively shallow gently sloping near shore areas.

Timing: Until Monday when it will likely be downgraded to an advisory.
Impacts (possible/likely/expected): Loss of life – strong currents that can carry even the strongest swimmers out to sea; injuries to beachgoers; beach erosion; sea water splashing onto low lying coastal roads; beach closures; disruptions to marine recreation and businesses; financial losses; damage to coral reefs; salt water intrusion and disruptions to potable water from desalination.

No one should enter the water, especially on the northern sides of the islands. All are also urged to say away from rocky and or coastal structures along beaches in the affected areas.

Rip currents are powerful channels of water flowing quickly away from shore, which occur most often at low spots or breaks in the sandbar and near structures such as groins, jetties and piers.
If caught in a rip current, relax and float. Don`t swim against the current. If able, swim in a direction following the shoreline. If unable to escape, face the shore and call or wave for help