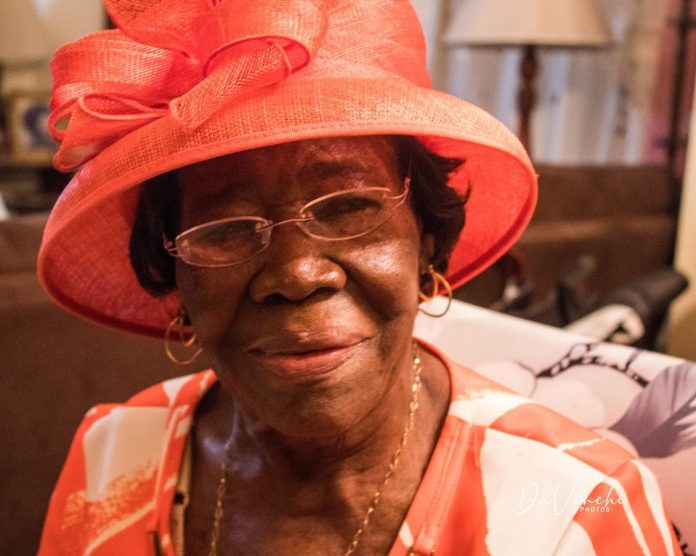 Hermena Joseph Goodwin also known as Winifred or Winnie was born December 28th, 1920 as told to her by her mother.  However officially her birth has been recorded as January 10th, 1921 based on the date given by the midwife as the date of birth.  In those days most children were born at home and the birth would not have been recorded until the midwife came through the area.  She was born on the historic Betty’s Hope Estate to her parents Clementina Benjamin and Edward Joseph.  She was the last of 4 children for her mother with her being the only girl and the first of 7 children for her father.

Her father Edward emigrated from Antigua to Cuba in search of work before she was born so she never met him until later in life.  At the age of 9 months she was taken to English Harbour to be cared for by her paternal grandmother.  At the age of 4 her mother took her back into her care where she resided at Pares Village.  She attended the All Saints School from the age of 5 and due to there not being a school in Pares she stayed with her Aunt Louisa Benjamin in the village of All Saints.

After completing 6th Standard in her teenage years she decided that she did not want to go on to 7th Standard as she wanted to become a seamstress.  This had been a dream of hers since age 10 where she would be constantly making clothes for her dolls whenever she was able to find a piece of fabric.  Her mom insisted that she return to school but she was determined to become a seamstress.  Her mom gave in and soon made arrangements for her to be trained in St. John’s by a lady who they referred to as Miss Baby.  So at the age of 17 Winnie embarked on the journey to becoming a seamstress.  She would leave home in Pares Village at 5:00 am every morning walking 9 miles to St. John’s where she would attend classes with Ms. Baby who was located on the corner of Redcliffe Street & Corn Alley and returning home by 6:00 pm.  So passionate was she about her future career that she would practice on her own during her spare time.  She laughed as she recalled her first attempt at making her own underwear where on trying it on turned out to be too tight.

She was under Miss Baby’s tutelage for one year after which she was able to start sewing on her own.  At the insistence of her mom her brother Arnold bought her a sewing machine from Shouls.  It was a Vesta Machine.  She said that before getting the machine she would have to sew by hand and would beg anyone that she knew with a machine to allow her to borrow theirs in order to do some of the stitches.  Upon acquiring the machine she started sewing for persons in her village as well as nearby.  She designed dresses including wedding gowns and was instrumental in making the gowns of her 2 daughters and 1 of her granddaughters.  She made school uniforms and other clothing for her children and grandchildren and she boasts all of the time about her ability to construct clothing without the use of patterns.

In the late 1930’s to early 1940’s her skills as a seamstress afforded her the opportunity to work at Lyons Estate where she made and fitted dresses for the Goodwin Family who were the occupants at the time.  From her recollection they were originally from Canada.  In the 1960’s she was employed by the Studio on Cross Street where she was proven to be one of their best seamstresses and again was highly involved in the construction of elaborate designs to include Carnival Queen gowns.

As a child people considered her to be very pretty and would always request to have her take part in their weddings as flower girl or bridesmaid when she got older.  As a result of that she took part in many weddings.  In the early 1940’s she was again asked to participate in the wedding of King and Olive Benjamin but she grew tired of taking part and instead offered to “put away the house”. This was a tradition in those days where the house would be prepared for the newly married couple after the nuptials.  The wedding took place in Christian Hill and it is there where she first met her future Mother in law who invited her to stay the night.  She eventually met her husband Ashwell “Affie” Goodwin who fell for her almost immediately.  She attended church with the family the following day Sunday at the Bethesda Methodist Church.

While working at Lyons Estate Affie who was a carpenter at a nearby estate would frequently come to visit her.  Eventually they became a couple and married in 1942 at the St. John’s Cathedral on September 30th.

Together they had 7 children, 2 girls and 5 boys.  Her husband also had 5 other children who she embraced and loved as her own.  Her eldest child Eulander Goodwin Fleming also known as Peggy passed away almost 20 years ago.  They resided in Christian Hill until 1960 when she moved the family to Matthew’s Road All Saints after separating from her husband.  With the help of her 2 eldest children who contributed to the household by leaving school early to find work and with the assistance of other family members and friends the family was able to settle in All Saints where she resides to this day.

Her mother passed away in 1947 and her brother Arnold migrated to Trinidad but before doing so he left her with two heads of cattle which eventually grew to a herd.  From the herd she was able to get milk that she would sell thus allowing her to have some steady income. 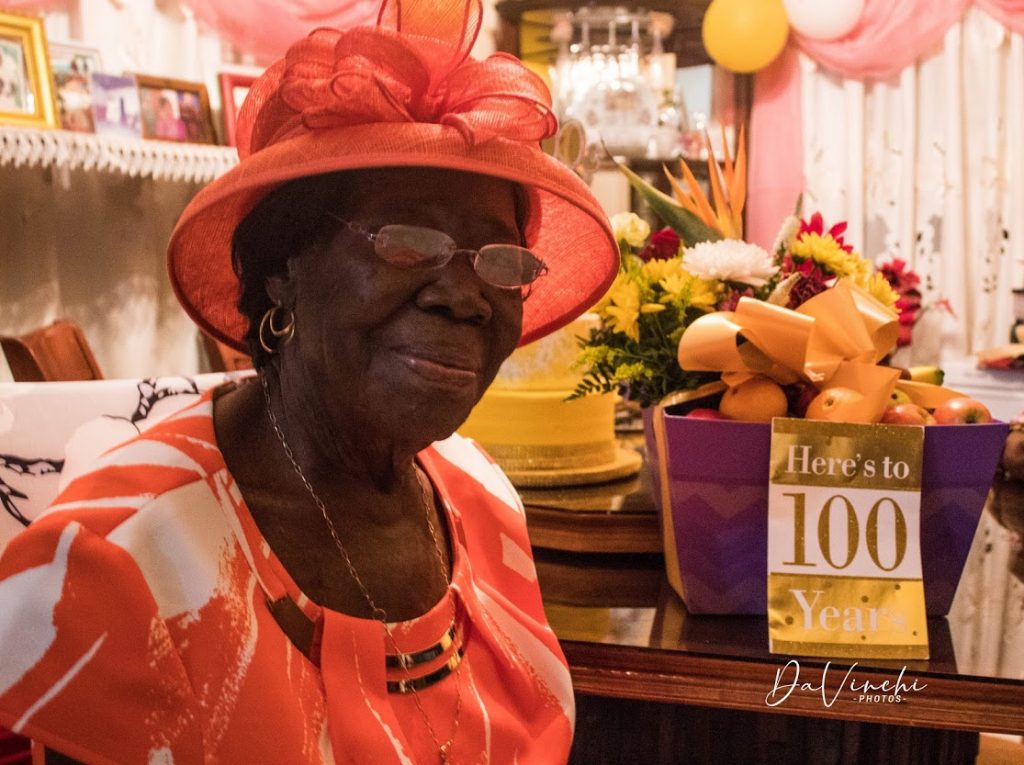 She also spent a few months in St. Croix in the 1960’s where she worked as a cook but soon returned home as she felt uncomfortable being away from her family.

In 1983 Winnie was able to travel to Cuba to meet her father and siblings.  This was facilitated by her nephew Ambassador George Junie Goodwin who was studying in Cuba at the time.  While there he attended a function and was introduced to a man from Antigua.  It was during their conversation that the gentleman mentioned that he had a daughter and as they spoke further Junie realized that the daughter he was referring to was his Aunt by marriage.  As a result, where she thought that she had no one left after losing her last surviving sibling on her mother’s side Arnold the year prior, it turned out that she was not alone and that there were 6 more in Cuba along with nieces and nephews.

Winnie ensured that all of her children were educated as best as possible.  Both of her girls attended private school while all of the boys attended public school.  She ensured that all of the boys learned a trade and that the girls were educated well enough so that they could seek out employment as professionals and so from her came an Airline Communications Supervisor, a teacher, a mason, a crane operator, a plumber, a printer, a taxi and car rental operator and businessmen.  She worked to ensure that her children could all be independent.

Winnie loves to be entertained and is a great dancer.  Her trip to Cuba revealed to her where the talent came from and it was definitely from her father.  When they put the music on they danced together and she remarked that he was a brilliant dancer.  She also enjoyed attending singing meetings where she would win prizes for being the best singer.  These meetings would take place at the different estates.

She also recalls dressing up in white at Easter time and attending Church and Sunday school.  She loved to recite her Golden Text and was always elated when she received a gold star for getting it right

She also recalls the different dances that she would attend on August Monday and Tuesday many of which were held in Glanvilles at the field near to St. Steven’s Anglican Church.

She is an awesome grandmother and to most of her grandchildren she is the third parent where she was instrumental in their upbringing.  Some of her great grandchildren have also benefitted from being in her care as well. She loves them all and would go out of her way to ensure that they were all happy and cared for.

Winnie has an eye for fashion and paid attention to detail.  Naturally she loves to dress and is admired by many whenever she steps out to go to church or some other event.  For her getting ready to go out is an art where she would first select her outfit ensuring that she has the best hat, shoes and accessories to match.  This ritual usually takes place the day before the event but if it is a wedding or some other special event rest assured that this activity could occur weeks before.  Once she is dressed and ready to go she ensures that she applies a little spritz of perfume.

She also enjoyed cooking and baking where her specialty was fungi and shad, lentil rice, bread pudding and potato pudding.  She also has her favourite foods which include potato pancake, soups and vanilla and rum and raisin ice cream.  She is not a drinker but she loves Ponche Cuba occasionally.

Never short on lending a listening ear she always offers sound advice whether solicited or not.  She hated seeing her children and grandchildren waste money and would always quote her mother saying “Money need a good manager”.  She would also say “Eat a little, save a little, spend a little”.  She lived by these words and this is manifested in her ability to save as much as she could to build her dream house in which she has lived for over 40 years.  She was a workaholic a trait that has also manifested in her children and grandchildren.  She was passionate about her work and would stay up late at night sewing and still get up early for work.

These days she also amuses herself by watching Judge Judy and Justice TV as well as watching the news on ABS TV.  She also enjoys listening to Healthy Living and Old Time Something on Observer Radio, programs on Radio Lighthouse and Sly J on ZDK.  She also enjoys watching African movies as well as plays especially the ones put on by the Police Drama group which she attends every year up to the last one that they had in 2019.

We asked her what was the key to a long life and her words to us were “Go to Church, read your Bible and don’t stay out late at night”.

We her children and grandchildren thank Almighty God for allowing her to be in our lives all these years.  We pray that he will continue to grant her good health and happiness.  On this occasion we would like to thank all of her doctors and nurses and other caregivers over the years.  We pray that the Lord will bless them in all of their endeavours. 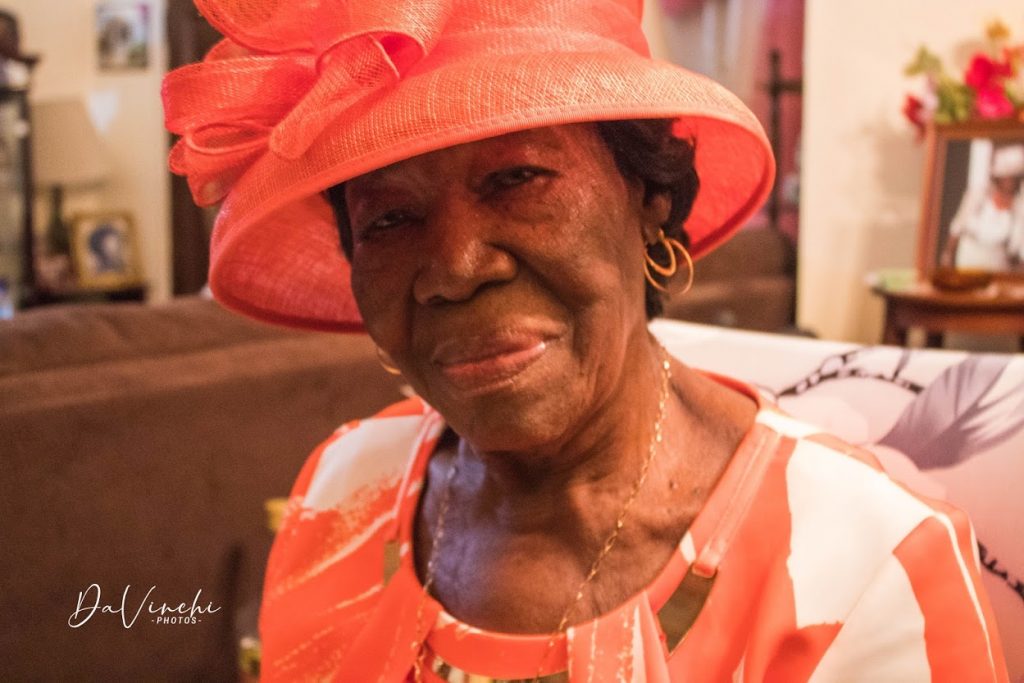