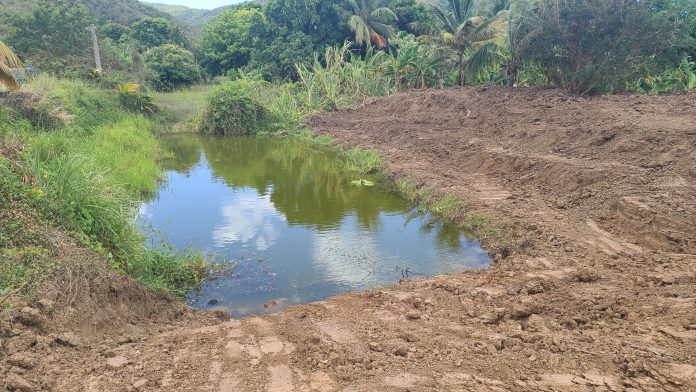 The Ministry of Agriculture is currently engaged in an ongoing project for local farmers to have better access to their farms and natural water sources for adequate irrigation purposes.

The excavator was seen earlier this week clearing bushes to create road ways in Bubba Valley, near Christian Valley, which is just one of a number of areas which are being targeted to provide improved road access to farms…

​Field Officers for the South West agricultural district, Shanie Joseph and Mr. Milton Barnes were out in the area while the heavy duty equipment was in operation.

Joseph said that she is happy that this is being done as some farmers have had to resort to leaving their vehicles parked on main roads and walk through bushes to get to their farm, either due to the bad condition of the roads or no access roads.

​According to the agriculture reps, some farmers who have had to abandon their effort to driving in, have experienced vandalism of their vehicles.

​Another Field Officer in the South West district, Mr. Milton Barnes, explained that during this project, they have encountered a few challenges including adequate heavy duty equipment but the ministry is urgently undertaking efforts to address this.

​We also caught up with life-time farmer, Mr. Murphy Parker who was on hand to share his thoughts on the work being done in the southwest district.

​He said that he was very happy to see that the ponds are being cleaned as they serve a very important source of water supply for farmers in the area and he also welcomed the cleaning of the land although according to him, it took too long in coming.

​Parker has made his mark in the field of farming in a number of other areas across the island.

​Ms. Joseph, in the meantime, also used the opportunity during our visit to encourage farmers to clean the outer areas of their farm and keep it clear.

This she added, will help to stave off intruders as praedial larceny is on the rise and also provides a clearer distant view onfarms which are usually located in isolated areas.

​Mr. Barnes, on the other emphasized that farmers need to work the land, especially during this period of the COVID-19 pandemic when increased crop production has become the new norm.