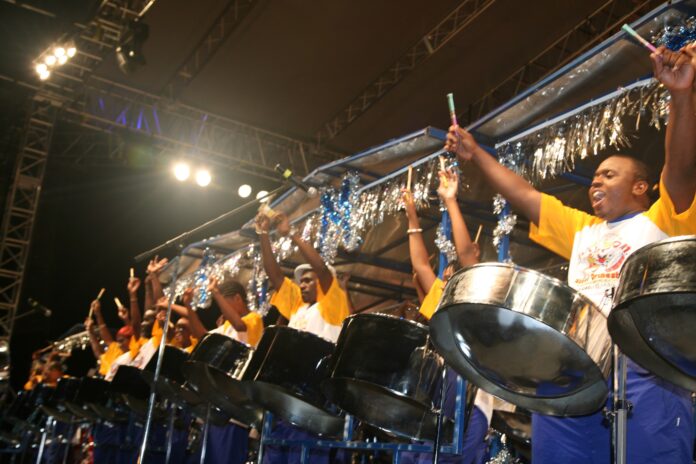 The Halcyon Steel Orchestra was founded in 1970, principally by the Kirby brothers of Grays Farm.

The brothers were assisted by Selvyn Walter and Melvin Simon. The band has participated in numerous competitions over the years and has performed outstandingly.

The band first won its first Panorama Competition in 1975 with arranger Gerald “Belly” Charles, followed by two sets of two-peats, one in 1978 -1979 with arranger Len “Boogsie” Sharpe and the other in 1986-1987 with arranger Victor “Babu” Samuel, who was also very successful in taking the band to the historical achievement of being the first four-peat Panorama Champion in Antigua and Barbuda, through the period 1992 -1995.

Over the years the band has been supported by a number of corporate businesses in Antigua & Barbuda, principally the Antigua Masonry Products Limited (AMP), for over twenty years.

Over the lifetime of the National Panorama Competition held during Antigua’s Carnival, Halcyon Steel Orchestra has claimed the Championship title thirteen (13) times.

Their most recent win was in 2016, with an arrangement by Devon Bachelor of Calypso Gary’s ’60 Years’.