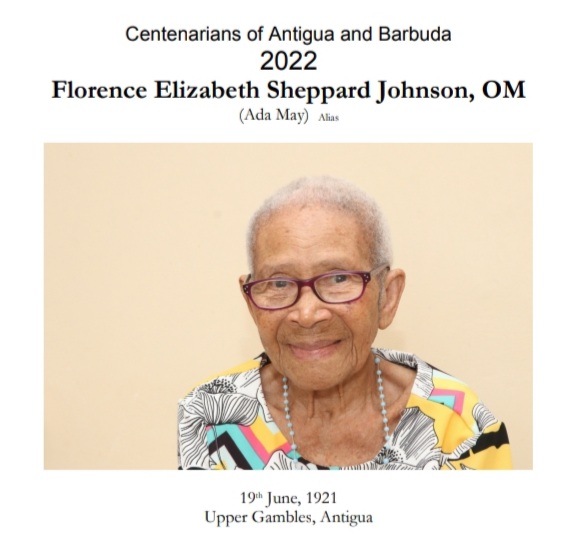 The midwife recorded her name as Florence and born at Liberta, in the Parish of Saint Peter, Antigua and Barbuda.

She has, however, never been known as Florence, but by what is suspected to be her baptismal name Ada May.

As a child, she was taken care of by an adopted aunt, the village teacher.

She attended the Gracehill Government School and, perhaps not surprisingly, she began her teaching career at a very early age at that institution.

The Pupil Teacher system was the order of the day then, and at the end of four years of teacher training she was awarded a scholarship to attend the Spring Gardens Teacher Training College in Antigua.

After college, she was assigned to the St. John’s Girls Government School which was then under the able and capable management of the late Mary Pigott where she taught for 22 years.

During this period she specialized in craft work and attended courses in Grenada and later at Brighton College of Arts and Craft in England.

She was next assigned to the Ministry of Education where she served in two capacities – (i) Supervisor of Girl’s Handicraft and (ii) Secretary to the then Administrator of Local and Overseas Examination.

This period lasted for 10 years.

After retirement from the government service and a much need rest for approximately 1½ years, Ada May again took up the teaching mantle at the Foundation Mixed (Miss Davis) School labouring there for 16 years, when she finally completely retired.

In all she served 52 years as an Educator.

An adopted son Ivor James (deceased) completes the lineup of boys. She has 16 grandchildren.

She loves singing, dancing and music in general. During her singing days she sang in choirs such as the Spring Gardens Senior Choir (she was a Moravian then), the Community Players, and the St. Joseph’s and Holy Family Cathedral Church Choirs.

Ada May Elizabeth Sheppard Johnson was given national honours in 2017. She was named an Officer of the Most Illustrious Order of Merit, OM, for distinguished contribution to technical and vocational education.

She made great sacrifices for her children, grandchildren and others. She will always be remembered as a somewhat quiet and unassuming person, but with a fierce determination to accomplish the things she wanted to, and an abiding love for her country of Antigua and Barbuda.